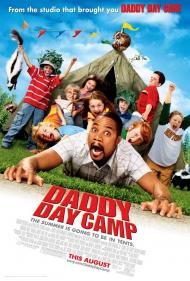 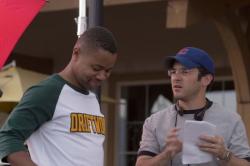 Do you remember Fred Savage from The Wonder Years? Well the kid has grown up and he is now a director. Most of his directing experience has been doing tween shows, that my kids love,like Phil of the Future, That's So Raven, Drake and Josh, Ned's Declassified School Survival Guide, Hannah Montana and Zoey 101, to mention a few. With Daddy Day Camp, he now directs a motion picture for the big screen. The screen may be bigger but the jokes are better fitted for the smaller one.

This sequel to the Eddy Murphy film, Daddy Day Care, finds the Dads expanding their business to a day camp in the woods. Gooding takes over the Murphy role of Charlie. Like all camp movies they have to deal with a rival camp nearby, and like all camp movies, the rival camp is full of rich, snobby kids and a very obnoxious camp leader, Lance, who humiliated Charlie years ago when they were kids at camp. OK, can everyone see where this movie is going? Of course you can.

99% of the jokes are aimed at children and usually involve body fluids or flatulence. One kid throws up several times. Another kid gets hit with a urine filled balloon. Many jokes are about farts or bad smells like a skunk or a nasty bathroom. If you think watching a little girl struggle to reach a cake on a counter and then make a huge mess with it is funny then you may like this movie.

Munro is the only slightly funny person in the movie. For some reason he always wears purple. Except when he loses his pants and ends up in his yellow star cover underwear. He is always with a young boy whom Charlie assumes is his son. Lance insists out loud that he is not his son because he hates kids. The best moment in this movie, and that's not saying much, comes at the end when the boy kicks Lance and says, "That's for telling everyone that I am not your son!"

Savage specializes in tween television and perhaps he should stay there. However, he has directed some episodes of one of the funniest adult sitcoms of the last few years, It's Always Sunny in Philadelphia. Maybe he needs to get away from kid movies and try a more mature comedy film. It sure couldn't hurt.