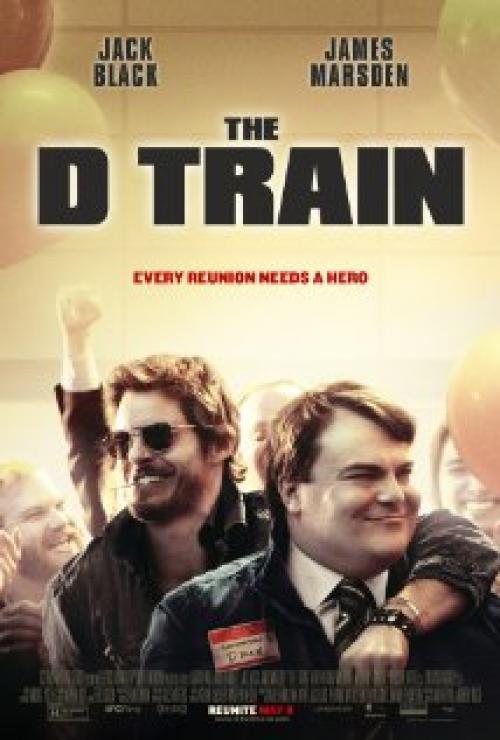 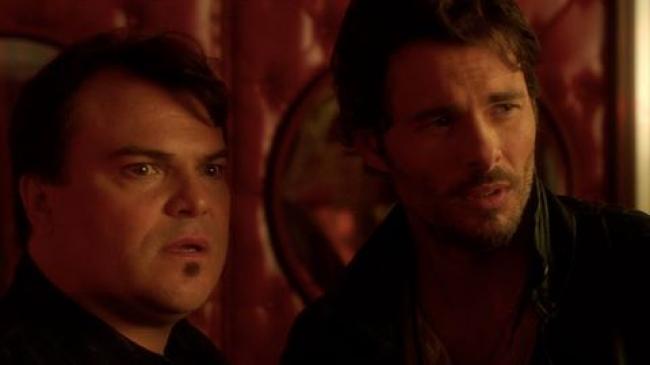 Jack Black and James Marsden in The D Train.

The D Train quickly derails after pulling out of the station. This Jack Black, James Marsden bromantic comedy seems as contrived as it is low budget. It was shot on the cheap in just a few weeks and the central storyline isn't very realistic. Despite the winning performances from the two leads, the set-up never rings true. Although it does provide a few minor chuckles along the way.

Black plays Dan Landsman, a married father who is a member of his high school's alumni committee preparing for its upcoming 20th class reunion. They are having a difficult time getting former classmates to agree to attend the party. Dan was a loser in high school and he is still unpopular. The other members of the alumni committee lie to him about going out for drinks afterward just because they don't enjoy his company.

After seeing an old classmate in a television commercial late one night, Dan gets the idea that if he can only fly to L.A. and convince the most popular guy in their class, Oliver Lawless (Marsden), to attend the reunion, then others will follow suit. Dan makes up a lie to tell his boss (a technophobe played by Jeffrey Tambor) about a potential big deal he's lined up on the West Coast and heads out to meet Oliver on the company's dime.

Now here's where the contrived part happens. Dan and Oliver spend the weekend partying. Dan is so intent on convincing Oliver to attend the reunion that he agrees to everything Oliver does, including doing copious amounts of cocaine. Anyway they end up at Oliver's apartment late one night and, completely out of left field, Oliver seduces Dan. Jack Black and James Marsden share a passionate kiss that includes plenty of tongue action.

Now I can accept that there are casually bi-sexual men like Oliver Lawless, but let's be honest. Men who look like James Marsden don't sleep with men who look like Jack Black – unless of course they have a chubby fetish, which isn't the case here. And I suppose it's possible that a heterosexual man could get caught up in a drunken coked-up moment of passion with a guy he idolized in high school and have sex with him. But the script doesn't pull it off. I would have enjoyed the story much more if Dan had turned out to actually be gay. It would have made the whole setup more plausible anyway.

One of the funniest lines is spoken by Dan's wife (Kathryn Hahn) to him after he returns from his trip, when she innocently inquires if he got Oliver to come. But the story continues off the rails once Oliver shows up at Dan's door. There's a subplot involving Dan's 14 year old son's budding love life. Oliver gives him age-inappropriate advice about having a three-way that is decidedly unfunny. The story culminates at the class reunion where Dan's and Oliver's tryst comes out in the kind of scene that only happens in the movies.

I always appreciate it when heterosexual actors have the guts to film a same-sex lovemaking scene. Unfortunately, The D Train fails to build a plausible storyline around it, which reduces the scene, and the movie itself, to little more than a well-acted gimmick. Which is a shame since I really wanted to enjoy taking The D Train.