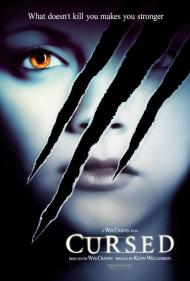 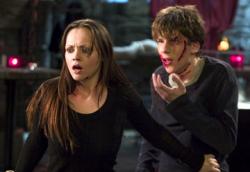 When you see a horror movie like Cursed, written by Kevin Williamson (Scream, I Know What You Did Last Summer), directed by Wes Craven (Scream, Nightmare on Elm Street), and starring Christina Ricci (who looks like she was born in a horror movie), you expect it to be something special. You don't expect it to be a middle of the road, B-movie horror film, without an ounce of originality. Somehow though, middle of road is exactly what Cursed ended up being.

The plot centers around a brother and sister, Ellie (Ricci) and Jimmy (Eisenberg), who are bitten by a werewolf one night after getting involved in a car accident in the hills around Los Angeles. Soon they're experiencing some pretty strange things; such as increased strength, heightened senses, and a strong urge to eat raw meat. After they discover what's happening to them, they learn that the only way stop their transformation is to kill the werewolf who bit them both. But who is the werewolf?

In the 90s, the team of Craven and Williamson shook up the horror genre with the brilliant Scream movies. These were movies that played with the genre while gently poking fun at it at the same time. In Cursed, it's as though those movies never existed. Characters behave in the typically appalling horror movie clichéd manner. "Oh, I hear a noise in the middle of the night. I'd better go check it out." Or "The werewolf was here a second ago, but I think he's gone. I'll stick my head up to this opening and take a look." In the Scream movies, such behavior was delivered with a wink and a nod, but here that self-acknowledgement is missing and movie suffers for it.

To be fair to the filmmakers, even though this movie is far from their best work, it's still better than the wreckage of horror films that we've been assaulted with lately. The pace of the film is quick and the special effects are quite good, including the all important transformation scenes, which can make or break a werewolf movie. The cast is good, with Christina Ricci leading the way, although with her look, a vampire role would have seemed more appropriate. There are also a couple of celebrity cameos, including Scott Baio and Craig Kilbourne, although not enough is done with them in either plot development or humor.

In the end though, Cursed is undercut by its lackluster, predictable plot and lack of scare moments. It comes off more as a first attempt at horror rather than the collaboration of two masters of the genre.