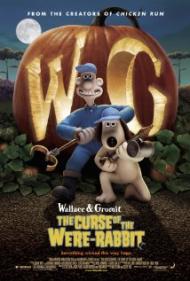 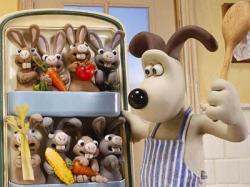 Gromit in Wallace and Gromit: The Curse of the Were-Rabbit.

Although he's probably best known in the United States for Chicken Run, Nick Park first made his mark with a series of Oscar winning shorts featuring the cheese loving Wallace and his loyal dog Gromit. Now, for the first time, the beloved pair are appearing in their first feature-length film. Like the earlier shorts, Wallace & Gromit: The Curse of the Were-Rabbit, is one the best animated films of all time.

For anyone unfamiliar with the pair, Wallace is an English inventor with a passion for cheese. Gromit, who never speaks, is his dog and the real brains of the pair. Where Wallace is impulsive and apt to take chances with his inventions, Gromit is always there to get him out of trouble with his common sense loyalty. Like Chicken Run their films are done with painstakingly detailed Claymation.

In the movie, Wallace and Gromit are running a humane pest control agency called Anti-Pesto. They've been kept quite busy with the upcoming Giant Vegetable Festival, which has been plagued by a horde of rabbits. Things get even dicier for the pair when Wallace hits upon the idea of using his newly invented brain-alteration device in an attempt to brainwash the bunnies into hating vegetables. When something goes wrong (as it's apt to do), Wallace inadvertently creates a were-rabbit; an enormous bunny with an immense craving for all things vegetable.

A love interest is introduced in the story as well when Wallace meets Lady Tottington (voiced by Helena Bonham Carter), the hostess of the vegetable festival. However, a rival for her affection appears in the form of Lord Quartermaine (Fiennes), an aristocrat whose idea of humane treatment is to shoot all the bunnies.

Although Wallace gets top billing, it is Gromit who is the heart of the story, as he was in their earlier films. In a recent interview, Bonham Carter compared the character of Gromit to a silent film star, and she's quite right. The animators are able to get an amazingly wide range of emotions from him using just his ears, his eyes and his brow. Apparently, before work begins on the film, the script provides Gromit with dialogue so that the animators know exactly what they need to get across from him in each scene.

The amount of detail in the movie is also truly remarkable. Somehow knowing that nearly everything you see onscreen is real and built in miniature, helps bring the movie to life. Although there is some CGI in the movie, to provide atmospheric things that couldn't be reproduced with clay, such as fog, you can still see the thumbprints on the characters. This does nothing to detract from the movie, it somehow enhances it. In any case, you can not help but be impressed by the work that went into creating this world.

Unlike the recent Corpse Bride however, the visuals here take a backseat to the characters and the jokes. The details are all there in the background, but you'll be so busy laughing and following the story that you'll only catch a glimpse of them. This is a movie that will require multiple viewings just to pick up on all the minutia in the background. 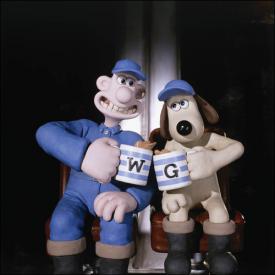 Wallace and Gromit: The Curse of the Were-Rabbit is delightful but it is certainly not "the best animated movie of this or any other year, without question." It is packed with charm and scenes best described as cute, like when Gromit puts a cardboard box, that reads "may contain nuts," over the naked torso of Wallace. But it is never truly exciting or outright funny.

The clay-mation is wonderfully detailed. Look close at Lady Tottington's clothes. She likes to dress like vegetables. As Scott wrote, Gromit is the heart of the movie. That dog can say more with his eyes than Norma Desmond.

The movie contains a great in-joke. In one scene Gromit is sitting in the truck listening to the radio. The song playing is Art Garfunkel's Bright Eyes. It is the theme song to Watership Down, which is a movie based on a book about a bunch of rabbits.

This is a good movie but it hardly deserves the accolades that Scott is pouring on it. Wallace and Gromit is cute, charming and mildly humorous. My nine year old loved the movie but my wife and I were less than enthusiastic. 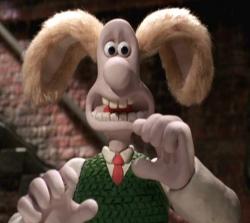 Wallace in Wallace and Gromit: The Curse of the Were-Rabbit.

I must admit that before watching this movie I was completely ignorant of the existence of Wallace & Gromit. I spent the first twenty minutes or so of the movie acclimating myself to their world. I must also admit that I was, at first, bored by the goings on. Once, however, the Were-Rabbit enters the story it does take off.

The Claymation world created here is truly amazing. And it is made to look even better by the realistic and often exaggerated-for-a-laugh camera angles, pans, zooms, pull backs and such. At times the movie plays like a Claymation version of Hitchcock.

The character of Gromit steals the movie. He does convey a spectacular range of thoughts and feelings with a minimal amount of facial movement. The absurd looking Lady Tottington or “Tottie" gets many of the laughs as voiced by Helena Bonham Carter who finds the perfect pitch and delivery for the character. But I think I laughed the loudest at the rabbit that gets Wallace's brain with his constant cries of “Cheese!"

Do I think Scott went a bit overboard with his praise? Yes. But hey, we all have our favorite genres or stars for whom we are putty in their hands (or in this case clay). See my review for Meet the Fockers or just about any WWII war movie for Eric and you'll get my point. Suffice it to say that Wallace & Gromit: The Curse of the Were-Rabbit can be enjoyed by Anglophiles and non-Anglophiles alike, just not to the same extent.