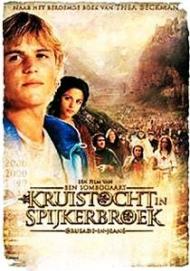 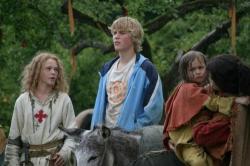 Crusade in Jeans, or Crusade: A March Through Time or it's original Dutch title Kruistocht in spijkerbroek, is a European film based on the first half of a 1973 young adult novel by Dutch author Thea Beckman. The plot is centered on an event in European history, which could prove to be educational or completely foreign, depending on your appreciation for such things. This may also very well explain why it only received a DVD release in The United States.

Dolf is a teenage boy from Rotterdam who plays on a junior national soccer team. As the film opens, we see Dolf miss a shot, causing his team to lose a championship game in Speyer, Germany. Lucky for Dolf, his mother is a scientist in Rotterdam who has helped to create a machine that allows a monkey to travel through time. So depressed by the loss, Dolph sneaks into the facility housing the time machine and sets the coordinates for Speyer, Germany just before the soccer match. However, Dolf mistakenly ends up in the middle ages.

Once there, he joins up with a large group of children marching to Jerusalem on what was known as The Children's Crusade. He falls for a sling shot wielding girl and proves his worth with knowledge unknown in the thirteenth century, such as performing CPR on a boy he saves from drowning. The most interesting parts of the film are when Dolph uses his knowledge of history. Some children tell him that the water will part for them when they get to the Mediterranean sea, as it did for Moses. Dolph responds, "I would not bet on that." This type of talk gets him branded a heretic.

The Children's Crusade was a disastrous endeavor. Not only did it not peacefully take back the Holy Land, but most of the children became slaves to whomever wanted them. The film even shows how the leaders of the Crusade would barter off some children for passage or food.

Dolph's mother meanwhile, tries desperately to find a way to bring back her son. An adult priest witnesses Dolph's "miracles" and records them through drawings and writing in a journal. Hundreds of years later Dolph's mother is shown the journal and uses it to track her sons movement across Europe.

The plot is ripe with possibilities and tension, and there is some to be found, but not much. I blame the screenwriters. In the novel, when Dolph first arrives in 1212, he saves a boy named Leonardo and a girl named Mariecke with a knife. Leonardo becomes his best friend. In the film, Leonardo is no where to be found. Mariecke's name was changed to Jenna and she saves him instead.

In the book, Dolph is 15. The movie merely states that he is still in school, implying he is a teenager. Played by then 23 year old Johnny Flynn the movie creates a romantic relationship between Dolph and Jenna that was not in the book. Spoiler Alert: He brings her back to modern times whereas in the novel he does not. The problem being that the relationship is so chaste and innocent that it makes no sense for him to so desperately want her with him.  Besides, how would a girl from the 13th century get along in 2006?

Which leads to the film's biggest problem. Everything comes very easy for Dolph in 1212. In the novel, Dolph struggles to understand the language spoken by the people in the Middle Ages, and they struggle to understand him. He wears a blue jacket that stands out like Anderson Cooper at a GOP convention yet no one takes notice of him. He blends in without any difficulty, only being noticed when his actions set him apart. When he first arrives back in time he seems less concerned than if he found himself caught in the rain without an umbrella.

The best thing that can be written about Crusade in Jeans is to forgo it all together and just read the book.