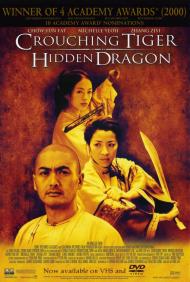 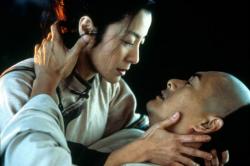 For a long time now, and often on these pages, I have complained of the lack of quality, fantasy films. At long last one has finally been delivered. For I can think of no other genre for Crouching Tiger, Hidden Dragon, to fall into than fantasy.

Chow Yun-Fat plays a mystical warrior in China who is weary of fighting and can no longer find inner peace in meditation. He decides to lay down his legendary sword, The Green Destiny, and entrusts it into the hands of his closest friend and long time love, played by Michelle Yeoh. She is the owner and operator of a company which guards caravans against bandits. She agrees to deliver the sword to Peking for him.

Shortly after it's delivery, the sword is stolen by a thief who is believed to be within the Governor of the province's house. The first portion of the film deals mainly with the attempts to get the sword back without offending the governor or accusing anyone.

It also deals with the return of The Jade Fox, Chow Yun-Fat's character's mortal enemy. The person who killed his master and stole the manual of The Wudan. A book which details the mystic fighting ways of the warriors of The Wudan, of which Chow Yun-Fat is a master.

The movie then goes on to the main thrust of the plot which deals with young Jen, the governor's daughter, who shows amazing ability in the ways of The Wudan and the choices she must make regarding life, marriage, and the path of good or evil.

The is also a running subplot between Chow Yun-Fat and Michelle Yeoh who have been in love all their lives, but been unable to do anything about it, owing to a debt of honor they each feel they owe to Michelle Yeoh's dead betrothed.

What makes this movie a Fantasy film, and not merely a period piece, is The Wudan. With the mystic powers of The Wudan, warriors can jump for incredible distances, walk on water, move at lightening speed, and in one of the most amazing scenes in the movie, even fight while balanced on the highest branches of trees.

The scenes involving The Wudan are some of the most amazing fight scenes ever staged. They are filmed so beautifully, and the moves are so agile, that it hardly seems violent at times. It's more like watching ballet movements. Or to put it more succinctly, it's like watching a ballet combined with The Matrix and an old Bruce Lee movie. And all three of them are combined in the most beautiful, amazing way.

My only problem with this otherwise great movie, is it's ending. Don't worry, I'm not going to give it away. I'll just say that it is a bit of a downer, and a little ambiguous, at the end of an otherwise incredible movie.

Just as a warning, this movie is done completely with sub-titles. This does put some people off. If you do have that prejudice, this is the movie you should lose it for. Like all good sub-titled movies, ten minutes into it, the tiny eye flicker between the actors and the words on the bottom of the screen, becomes so unconscious that you no longer realize you are even reading.

So, at long last, a truly great fantasy movie has been made. And while it does take place in China, and not a medieval, European type setting, as is more typical, it far outstrips any previous attempts at an adult fantasy film. 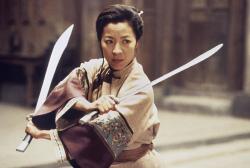 2001, thus far, is looking like a banner year for movies. In all of last year I gave just five new movies a four star rating; this year I have already given the highest rating to four movies, which is even more amazing when you consider that I have only reviewed four movies this year. Crouching Tiger, Hidden Dragon is truly a unique and spectacular film.

As Scott said this is really an adult fantasy movie mixed with familiar aspects of the classic martial arts films of the seventies. The characters are all larger than life and emotions are conveyed, as often as not, through physical confrontations. The Wudan warrior is most certainly related to Lucas's Jedi Knight. That Crouching Tiger, Hidden Dragon, ( isn't that a great title? ) is able to mix in real feeling and fully developed human relationships is altogether a surprise.

This movie is intriguing to begin with, and then it is suddenly and amazingly elevated to another level when the fight scenes unfold. They are truly breathtaking. It is also a love story as well as being a statement on women's rights. Director Ang Lee gets almost everything right; telling enough to fire the imagination but not so much that it is spoiled.

The cinematography is quite beautiful and the setting is perfect for the action and story that is told. The acting is very good and the quiet scenes are handled as gracefully as the running-over-the-roof-tops scenes are. I must disagree with my brother on the ending, which is properly befitting for a mythical tale; mixing tragedy with whimsy in a poetic way.

This is that rare movie that should appeal to almost every demographic, men, women, and teens alike. So get over the subtitles and go see Crouching Tiger, Hidden Dragon. 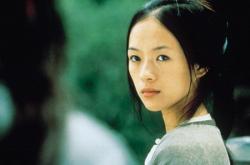 Crouching Tiger Hidden Dragon is what good fantasy films are all about. You must have well-established characters and treat the fantasy scenes as norm. This movie does both well.

The two love stories the movie showcases are the heart and emotional center of the movie. The characters come to life in their frustrations of unrequited love as well as the consummated and lengthy (not to mention violent) foreplay.

The fight scenes, as my brothers have mentioned above, are great. They are very fantastical and beyond belief. However, since the movie treats it as the norm of the Wudan warriors, the action comes across the screen without the audience thinking how fake or unrealistic it looks. Now to disagree with Patrick as I usually do; The subtitles did bother me. They didn't ruin the movie, but it is distracting to have to divert your eyes from Michele Yeoh's face to read the captions. Considering that Her entire relationship with Chow is evident only by there glances and stares I felt that I missed much of their passion from having to read the dialogue.

The distracting subtitles are not the only problem I had with this film The ambiguous ending that Scott has mentioned is a bit annoying. Yes she makes a wish, but so what. This is a girl that can fly. Jumping from a cliff is not very suspenseful when there is no danger. Also, the extended horse back chase, fighting, running away foreplay scene was way too long. You knew these two were going to hook up so why waste the audiences time.