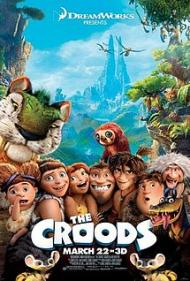 The Croods is essentially an Ice Age movie with humans in place of the animals. Think of it as The Flintstones moving to a new neighborhood. As generic as that all sounds, The Croods still manages to entertain. This may be in part due to the script being based on a story by Monty Python alumni, John Cleese.

Before knowing that Cleese had contributed to this film, I was struck by a slightly dark introduction in which Emma Stone narrates about how all of their cavemen neighbors have died. I am not sure what parts of the script remain Cleese's and what parts were added by Kirk De Micco and Chris Sanders, but that beginning seemed a bit out of place for the rest of this family oriented film. The working title under Cleese's script was, "Crood Awakening."

The Croods tells the story of a family of cave dwellers living desperately in a prehistoric age. They spend all of their time in a cave, except for a few moments every few days when they venture out for food. Grug, the father, preaches to his family that all things new are bad and that they all must follow his strict instructions to survive. His ways have in fact been successful, but with such a blatant political/social set up as that, we just know that a change is a coming.

That change comes in the form of Guy, a young man about the same age as Grug's daughter Eep. He is from a more advanced, however deceased, group of humans. He can make fire and knows how to get around in the outside world. Of course Grug does not trust Guy's progressive ways and insists that they all still live by his tried and true rules. Yeah, the message is hardly subtle.

After natural disasters start to strike, the group is forced to move on together, with the hard headed Grug being ignorant of and reluctant to try anything Guy introduces them to. They are constantly in danger by an odd assortment of creatures and from an ever changing landscape. Through it all, Eep and Guy grow close while Grug gets proven wrong over and over again. Near the end of the film he has a heroic moment, but by then the point has been clearly made. A family that evolves together, stays together.

The cast of characters are all one dimensional stereotypes we have seen countless times. Besides Grug and Guy, we have Eep, the modern animated chick. She is adventurous and defiant. Think Merida from Brave (2012). Her brother Thunk is a fat moron. Think Chris from "Family Guy." Ugga is like Marge Simpson. She is patient, kind and hopelessly dull. Baby Sandy is Maggie Simpson if she had rabies. Gran is like every other character Cloris Leachman has ever played. She is rude and grumpy.

Although much of this story is generic, we will never know if Cleese's script was any better. Either way, The Croods is a light hearted fun film with a strong family theme. My wife and I took our teenage sons with us and it was nice to hear them laugh several times during the film. I would just like to know why it is always the father in cartoons that comes off as such a detriment to the family unit? Think Fred Flintstone, Homer Simpson, Peter Griffin, Stan Marsh... 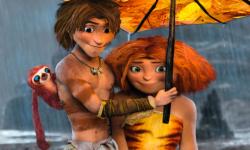 Ryan Reynolds and Emma Stone provide the voices of Guy and Eep in The Croods.

Back in 2005 The Croods was envisioned as a stop-motion comedy to be produced by Aardman Animations, the makers of Wallace and Gromit and Chicken Run. As Eric mentioned, it was originally titled Crood Awakening and was to be written by John Cleese and Kirk De Micco. The plot was about a caveman living in a small village with a prehistoric genius and was to be a buddy comedy. Following the initial script, development stopped on the film for several years and when the idea was brought back up it was decided to make it as a traditional animated film with a brand new script, without John Cleese, this time centering around a family. The only element that seems to have survived the transition, is the relationship between Grug and Guy, which seems to echo the original idea of having a caveman and a prehistoric genius rubbing each other the wrong way.

While I agree with Eric that the end result of all these changes isn't anything too spectacular, I seem to have enjoyed it more than he did. It's lightweight entertainment with lots of action and eye candy to go around. The voice acting is well done and the humor, while not hilarious, is at least enough to make you smile.

One oddity in the script is the way the intelligence and attitudes of the Croods is inconsistent. Sometimes they seem like Neanderthals, barely above the level of animals, while other times they are able to count and talk about grounding their daughter and express very modern day attitudes. It doesn't really damage the film, but I wish the writers had picked a tone and stuck with it.

Eric referred to the characters as stereotypes, but if anything they're archetypes, and that doesn't mean they don't produce laughs. One of the more amusing running jokes is also one of the oldest tropes in joke telling and involves the mother-in-law character. Whenever anything bad happens, Grug counts the family members to make sure everyone is still alive. Whenever he gets to his mother-in-law, he seem disappointed that she survived.

There are several big action scenes that are nicely done and would probably have looked even better on the big screen and in 3-D. There's an ever changing landscape that provides plenty of eye candy, although it seems odd that somehow the Croods never noticed there was a jungle just a couple of miles away from the desert they're living in.

Although I agree with Eric that it's an old trope in Hollywood to have the father in a family film be an idiot, I wouldn't actually put Grug in that group. He's not an idiot in the same way that Homer Simpson or Peter Griffin are. He might be reluctant to change, but he's much more responsible than the morons Eric mentioned and he cares for his family and as Eep points out in the beginning, he's kept the Croods alive while all of their neighbors have died. And Grug comes through for his family in the end. He's the hero of the story after all.

This may not be the most original film ever made, but it is a lightly entertaining one. 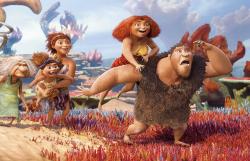 I was far less enamored of The Croods than either of my brothers. This isn't surprising since I am not a fan of modern day animation, that so often places computer imagery over story. The Croods perfectly illustrates this. It looks great, some of the landscapes are truly breathtaking to behold, but the story is about as complex and compelling as Sesame Street.

Scott makes a good point about the uneven behavior exhibited by the Croods. They run around on all fours half the time but intermittently evoke modern day sensibilities. I'm guessing this was an attempt to appeal to both children and adults. The silly slapstick that permeates the movie is clearly aimed at the preteen and under set, while the more contemporary humor is meant to keep the adults from being bored out of their minds. Emphasis on the word meant, since it utterly fails in this regard.

It is far more successful in providing laughs for the kiddies. I loved Eric's description of Baby Sandy being Maggie Simpson with rabies. How apt. Her over-the-top antics are sure to have children in stitches. And Granny is worth a chuckle or too. I found the action sequences preposterous, even for a cartoon. Eric mentioned the slightly dark opening narration, but the rest of the film lacks any sense of danger or tension. In a world where these characters can do anything without being hurt, such as falling hundreds of feet to the ground, Grug's constant harping on danger seems superfluous.

I see Eric's point that the script makes Grug out to be a bit of a bonehead but, as Scott pointed out, he does come through for his family when they need him most. I found the relationship between Grug, his daughter and Guy to be a bit reminiscent of the father/daughter/fiancé relationship in Father of the Bride. Like Stanley Banks, Grug is suspicious and hostile towards this new male, and dislikes his daughter's growing attachment to him. They even copy a joke from that movie. When they come upon a lake Grug warns his daughter to be careful as it may be dangerous. She scornfully shrugs off this advice but the second Guy agrees with her father she instantly changes her mind. In Father of the Bride Stanley tells his daughter to put on a coat before going out. She refuses until her fiancé seconds her father's opinion whereupon she happily runs upstairs to get it.

Unfortunately, thinking about that wonderfully witty comedy reminds me of just how banal The Croods is. It tries for a bit of heart at the end but anyone over the age of five will see right through to its contrived center. But then what do I know. This movie was such a huge hit that a sequel is already in the works. Just what the world needs, yet another animated Hollywood franchise.