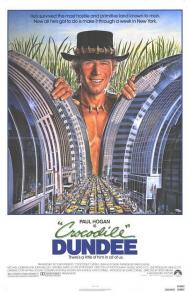 Mick Dundee shows what a real knife looks like in Crocodile Dundee.

The 1980s produced more than their fair share of feel good comedies. The decade of greed was very generous with its laughs. Crocodile Dundee is a prime example of the kind of light-hearted, innocent comedy that the 80s seemed to specialize in.

Hogan plays Mick Dundee, an Australian wild man from the outback. Newsday reporter Sue Charlton decides to interview him while she is touring Australia after she hears of how he survived a crocodile attack. Despite being a sophisticated New Yorker, she (and the audience) are quickly charmed by Mick's antics and his charismatic personality.

The story is evenly split into two acts. The first half involves Mick showing Sue around the outback. They meet some aborigines, survive a crocodile attack, fight off some kangaroo hunters and start to fall in love against the majestic splendor that is Australia.

In the second — and best — part of the movie, Sue takes Mick back to New York with her and he becomes the fish-out-of-water this time. Mick's charm works just as well in the Big Apple though and he's soon making friends all over Manhattan. The only downside to the trip for him is meeting Sue's fiancee. Since this is a feel-good comedy, you can probably guess how it ends for the pair, but I won't give it away here.

Writer and lead Paul Hogan was already a star in his native Australia when he made this movie, but was only known in the rest of the world for a series of tourism commercials where he espoused the wonders of down-under in his laid back Aussie manner. He made a splash for himself with this movie as it became one of the biggest box office hits of 1986, winning him the Golden Globe for best Actor in a Comedy and even an Oscar nomination for best screenplay.

Of course the real reason this movie succeeds is that Hogan is perfectly cast and so very, very likable. He sees everything with such wide-eyed innocence that you can't help but root for him. The movie is carried effortlessly on his leathery shoulders.

Hogan's performance is so good that he makes up for the movie's biggest problem, which is his co-star Linda Kozlowski. She's not a very natural actress. She comes across as stiff, especially when compared to Hogan. Although evidently she has enough personal charm because Hogan married her in real life. It would take an actress with real comedic ability and a big personality to stand-out in this part, and she just doesn't have it. There may have been chemistry between the two actors, but the on-screen love story doesn't really ring true.

The plot has a little bit of an old-fashioned feel to it and I could imagine it being made in virtually any decade since movies first started being made. Hogan himself seems like an old-time movie star. You know he'll always play that same character and he is easily impersonated. It doesn't feel old though, instead it feels fresh and funny, even more than 20 years after it was released. 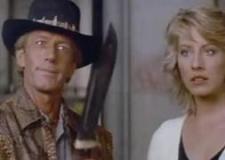 Sue is very impressed with the size of his knife.

Crocodile Dundee is based around the old city mouse and country mouse story. Although I agree the second half of the movie is the better half, the part in Australia has some great scenes as well. My favorite is with the snake at the campfire.

Kozlowski is completely forgettable. Although she has a nice ass and I noted her lack of underwear, she remained unremarkable the entire movie. She sounds like Sharon Stone but looks like a young Jane Lynch. Someone like Goldie Hawn could have done wonders with the role.

What is great about Mick Dundee is that he is a fully fleshed character. He has his moments of unbelievable heroism, such as when he kills the crocodile. He also has his insecurities, such as being nervous on his fist plane ride. He is an impressive outdoors man, but still puts on airs to impress Sue, such as when he looks at his friends watch, but pretends to know the time by looking at the sun. He also has a spiritual side, "Yep, me and God, we'd be mates."

His best quality though is his directness with people. He tries to greet everyone he passes on a crowded New York street. He cops a feel on a drag queen to find out what sex she is. Even when he is naive he is still up front and charming. When one prostitute says to another, "We may just have to give him one for free." He asks, "One what?" Mick Dundee is one of the greatest characters to ever come out of a romantic comedy. 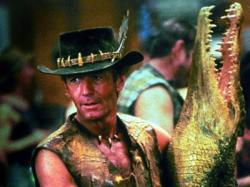 Paul Hogan makes his entrance as Crocodile Dundee with one of his namesake mates.

The 1980s was - for the most part - an optimistic, nostalgic decade as reflected in some of its biggest hit movies. Many of them are big and colorful with simple plots and obvious jokes. Crocodile Dundee is one clear example of this. It’s an old-fashioned fish-out-of-water rom/com with a bit of adventure thrown in for good measure.

The 1980s was also the decade that saw the birth of political correctness; although in a tame manner by today’s standards. Dundee grabbing the drag queen’s junk or asking the black chauffer what tribe he is from would both be considered unPC in 2011.

Paul Hogan is like an old-time movie star as Scott wrote. And Mick Dundee is from another century, like a cowboy out of the Old West. I mean this guy had never even seen an escalator before. He is so charming, good natured and well intentioned (without being at all dull) that he befriends nearly everyone he meets.

I also concur that Linda Kozlowski is pretty stiff and doesn’t create much chemistry with Hogan. Eric, I too thought she sounded like Sharon Stone. It’s not that she ruins the movie but it could have been so much better if, like in Romancing the Stone for example, the female lead had been the male lead’s equal.

Crocodile Dundee is remembered for its star Paul Hogan. He certainly deserves credit for putting all things Australian into the American consciousness. You never heard people say “Good’ay mate” before this movie came out and the Outback Steakhouse restaurant chain owes its popularity in big part to Hogan’s titular character.

Hollywood in the 1980s churned out a lot of lightweight fluff. Crocodile Dundee is one example. It is 90 minutes of escapist entertainment that still charms a quarter century after its release.