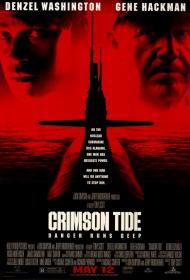 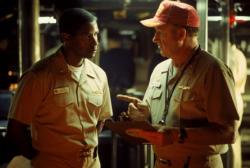 Crimson Tide is a philosophical debate on war. Captain Ramsey is old school military. He takes and gives orders without question. "We're here to preserve democracy, not practice it." Lt. Commander Hunter is a new age Officer. That is to say that he is a liberal in the wrong job. Of course this is a Denzel Washington movie, so Hunter is proven to be in the right.

Hunter went to that Liberal bastion known as Harvard. Early in the movie, he questions the meaning of The United States dropping the Atom bombs on Japan. He also says,"In my humble opinion, in the nuclear world, the true enemy is war itself." What the hell is someone like him doing in the military. In the liberal world his character is a hero. Applied to real life, people who hesitate in war usually cause more casualties.

As captain and executive officer of the submarine U.S.S. Alabama, Ramsey and Hunter find themselves at odds when they receive a fragmented message right after receiving a different message that orders them to fire their nuclear warheads at Russia. Does the partial message rescind the order? A mutiny and lots of pontificating goes on as the all star cast sweat out what may or may not become a nuclear war.

It is not that I hated the character of Hunter, I hated the character of Ramsey. He is written as a complete stereotype, that of a military hard nosed, hard head. The only real thing that makes Hunter into a hero is Hackman's cliched captain. Just because he is old school does not mean he would so easily, and willingly, potentially start World War III. But without his one track mind, Hunter would not come across as a shining knight of liberal thought.

The only thing to take away from this movie is that the military needs to be more conscientious. It's like when John Kerry said, "I think there has been an exaggeration of the terrorist threat." In war, anyone who sees in shades of gray and not black and white is bound to lose.

Crimson Tide is an edge of your seat war movie, set on a United States Nuclear Submarine, that also manages to be thought provoking. It is well acted, filled with taut action, and features clever dialogue. The cast is filled with recognizable faces, including a pre-Sopranos James Gandolfini, a pre-Lord of the Rings Viggo Mortensen, a post-Silver Spoons Rick Schroder, a post-A Bronx Tale Lillo Brancato Jr., a young Steve Zahn, and Ryan Phillippe making his movie debut.

Eric, you miss-characterize Hunter. When asked if he thought the United States should have used the bomb on Japan during WWII, He replies, “If I didn't, I wouldn't be here.” It is a clear cut reply. As for him being hesitant in a crisis, there is a scene where he orders the deaths of several crew members in order to save the entire sub. He shows no hesitation in so doing. Yes Hunter is shown to be correct in his decision not to launch the nuclear missiles but, as the admiral played by Jason Robards tells both Hunter and Ramsey, “You were both right and you were both wrong.” Eric, this movie is nowhere near as one-sided as you make it out to be. These men end the movie with respect for each other.

Now of course the United States Navy does not want to see a movie where there is a mutiny aboard one of their ships. They refused to provide any assistance in the making of this film. This is nothing new. More than half a century ago the Department of Defense demanded many changes to the script of The Caine Mutiny (the only previous movie to depict an American Naval Officer being relieved of duty by his Executive Officer) when it was being made. That is until the book won the Pulitzer and became a runaway bestseller, whereupon they approved Stanley Kramer's script. As both movies are works of fiction, and neither one really casts the United States Navy in that negative of a light, the brouhaha over them -in hindsight- seems quite unnecessary.

I loved the back and forth tension of the movie. All of the men on this sub are patriots, no matter their political affiliation. Regardless of whether they side with Hunter or Ramsey they all make decisions based on what they see as their duty. All of them are acting from a place of honor. Unlike Eric, I will not say a man is unfit for duty simply because he is a liberal or a conservative. I will concede that Ramsey is the antagonist of the piece, but compared to Humphrey Bogart's Captain Queeg he's a hero. Or, to use another example, compared to James Cagney's Captain Morton in Mister Roberts he's downright avuncular. In the climactic moment, when Captain Ramsey regains command of the ship, he allows Hunter time to make radio contact with Washington, something Queeg (or any true villain) would never do.

The real joy in this movie though is watching two icons go toe to toe. Denzel Washington and Gene Hackman are not only both great actors they are both larger than life movie stars with commanding screen presences. It's a treat watching them play off each other, and Crimson Tide, thanks in no small part to these two men, is one hell of an entertaining war picture. As for the message of the movie; Eric, the point it's making is that nuclear weapons have changed the very nature of large scale war. Although you may not want to think so, it has now become much more gray, than black and white.