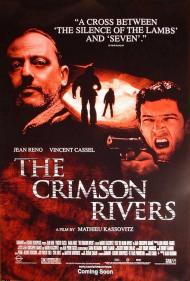 Vincent Cassel and Jean Reno in The Crimson Rivers

The Crimson Rivers (Les rivieres pourpres) stars two of France's most well known actors, Jean Reno (Leon: The Professional)  and Vincent Cassel (The Black Swan).  It is likewise directed by famous French actor Mathieu Kassovitz (Amelie, Munich).  The real star of the movie though, is the scenery.

Reno plays Parisian detective Pierre Niemans.  He is summoned to a prestigious University located in the French alps to investigate the torture and killing of a professor.   Meanwhile, another detective, Max Kerkerian  is looking into two crimes.  One is a break-in at a elementary school where some old photos and papers were stolen.  The other crime is of a graveyard tomb being desecrated with Swastikas.  The crypt was for a young girl who died 15 years earlier.  Her mother is now a nun who sits in a dark cell babbling about demons.

Niemans's and Kierkerian's investigations eventually cross paths and they reluctantly team up.  Niemans and Kierkerian are archetypes.  We have seen these kind of policemen many times over in movies.  Niemans is a legendary veteran cop, while Kierkerian is the younger one who likes to fight.  Both prefer to work alone.

At one point Kierkerian gets into a fight with a suspect.  In the background some other guys are playing a Street Fighter video game.  The instructions and announcements made by the voice on the game apply to Kierkerian's fight with the punk as well.

Another cute idea is that Niemans is scared of dogs.  It comes into play a couple of times in the story.  It also gives Kierkerian a chance to say, "Supercop scared of a little pooch? Son of a bitch!"  The last line in the movie is Niemans starting to explain to Kierkerian why he is scared of dogs.


Early on we learn that something is not right with the college.  Many students graduate and stick around to work at the University.  Many generations of families work together there.  The Dean's secretary is the Dean's son.   Just how this all ties in with everything else is a mystery waiting for you to watch unravel.

The mountains continually loom in the background throughout most of the film.  It is winter and the setting looks very harsh and unwelcoming.  Had this been filmed in summer I believe the locale would have been breath taking.  The story's climax happens on the side of a mountain.  An avalanche comes crashing down.  It is an awesome special effect.

The solved mystery does not turn out as exciting as I had hoped.  Perhaps something got lost in translation.  I watched the dubbed version.  What remains though is a taut thriller that will keep you wondering until the snow comes crashing down.