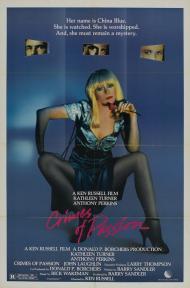 China Blue and the Reverend.

Crimes of Passions was somewhat of a classic film when I was in the Navy many years ago. They showed it so often on ship that I can recite many of it’s lines. The movie is all about sex, and that alone could explain why it was so popular among the mostly male crew but it actually is an interesting watch even all these years later.

Bobby and Amy are a married couple with young children. They were high school sweethearts, but their marriage is currently on the rocks. Amy seems disinterested in having sex with Bobby and they argue over money. Trying to keep the peace, and earn extra cash, Bobby takes a job following a designer, Joanna, after hours, as it is believed by her boss that she is selling his designs. What Bobby discovers is that Joanna is not selling company secrets but her own body as a prostitute in a run down motel room she rents, calling herself China Blue.

Also watching her is a Reverend who is obsessed with her and very frustrated by his lack of sex. He spies on China blue or visits peep shows, only to run out into the street and start preaching against cardinal sin. When China Blue walks by he says, “Save your soul, whore!” To which she responds, “Save your money, shithead!”

Crimes of Passion is fairly frank in its depiction of sex acts and sexual references. Bobby's human penis joke is worth a laugh, but the scene with China Blue and the cop will stay with you longer. It involves a night stick and some bondage.

Although the entire movie is a bit over the top, it does have something to say about sex. Each main character sees sex differently. Bobby looks at sex as a way of expressing love. He gets mad at his wife who sees sex as a wife’s duty. “You were satisfied.” She argues, making Bobby more angry. The Reverend thinks of sex as something dirty, to be repressed. He is attracted and repulsed by sex at the same time. China Blue uses sex as a way of being in control. Under the guise of a prostitute, Joanna is in charge of her life. It is through Bobby and an old woman hiring her, that she starts to change.

On one hand, Crimes of Passion is a good old fashioned trashy movie. On the other, it says something legitimate about humanities most intimate moment. The movie ends on a violent cheesy note, but then adds a brief scene where Bobby says he has no idea if he and Joanna will make it. The movie balances two very different worlds to make a fascinating watch.