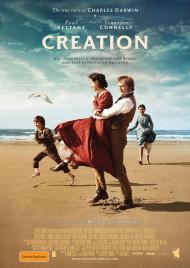 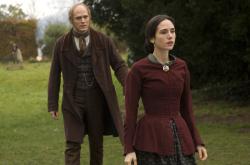 Perhaps no other scientist in history has sparked more controversy than Charles Darwin. His theory of evolution is accepted as fact by many, debated by others and flat out refused by others. Some scholars have posed the question, "Did Darwin kill god?" A question that no doubt is as capable of stirring up debate as Darwin's original theory. It's also not a question that is answered by Creation, which only tells the story of Darwin writing his famous book and not the consequences.

Darwin (Bettany) was one of those figures about who I knew very little. Everyone knows the basics of his theory, but of his personal life I knew nothing. According to this film, which is based upon a play written by Darwin's great-great grandson, while Darwin was a botanist, geologist, biologist and many different kinds of scientist, his driving force in life was his family, especially the light of his life, his oldest daughter Annie.

While Darwin's theory is often used as a rejection of religion, Darwin himself was a church-going, religious man for most of his life. He may have been skeptical of a literal interpretation of the bible, but he attended church regularly and one of his best friends was a minister. It was only upon the death of his daughter Annie of Scarlet Fever at just 10 years of age that he completely rejected God. His wife (played by Bettany's real-life wife Jennifer Connelly) did the opposite and became even more religious, finding peace in the belief that Annie was now in heaven.

This is not a particularly upbeat movie. Through most of it Darwin is deeply depressed and bordering on madness. He retreats from the world and his family. His only companion is the ghost of his dead daughter. Through flashbacks we learn of her death and some of the family history. Darwin struggles to write his book and goes through various quack medical treatments in an effort to treat what he sees as a physical illness, but would today be treated as a psychological ailment.

Bettany does a good job portraying the depressed scientist and family man.  He and Connelly make a believable couple (you'd hope so) and you feel that despite all their difficulties that this is a couple that love each other.  And as their relationship and the family are the real heart of the movie and not the Theory of Evolution, it's important that they work well together.

Although Darwin would go on to become arguably the most famous scientist in history this is more a movie of a father coping with the death of his daughter than it is a treatise on his work or an exploration of his celebrity.  As such it can be a bit of a depressing slog, but thanks to the performances of its leads, it does have a satisfying ending. 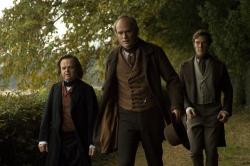 I really disliked this movie. Here is one of the most controversial scientific theories in all of human history and they've gone and made a very dull movie about how it came to be written. I was expecting some heated intellectual debates between Darwin and his minister friend but other than a few brief conversations it never happens. Instead we get scene after scene of a mordant Darwin agonizing over the death of his young daughter. He hallucinates her presence and really does seem to be going mad. At least that is how the direction is intended to make it seem. Frankly I was annoyed by it before the end.

Paul Bettany gives a fussy, overly mannered performance as Charles Darwin. He is in nearly every scene and has to carry the movie. He does manage to project Darwin's fragile mental state but other than sadness and confusion he isn't given a very broad range of emotion. The script never takes full advantage of the source material. Most of the scientific theory is shown as Darwin teaching his young children lessons by telling them stories involving animals.

He and Jennifer Connelly do make a believable married couple but I found her to be quite dull as the devoutly religious Emma Darwin. And the pacing is pretty listless. It runs 108 minutes but seems to last far longer than that. Although it was marketed as the story of how Charles Darwin wrote On the Origin of Species this is really the story of how Charles and Emma Darwin dealt with the death of their young daughter Annie and how it eventually became an impetus for Charles to write his book.

It isn't until near the very end of the movie that he actually writes his book. The last 20 minutes are quite engrossing as he shows his work to his wife to read, telling her she alone gets to decide whether they publish it or burn it. I wasn't expecting a documentary with a bunch of scientists pontificating on the theory of evolution but I was certainly hoping for something a bit more intellectually stimulating than this highly emotional and very intimate look at the life of Charles Darwin. The focus almost never leaves his immediate family.

Creation isn't about the science versus religion controversy that Charles Darwin sparked and that continues to be debated today. This is the melodramatic story of his family life and the role that personal tragedy played in the writing of one of the most influential books in history. 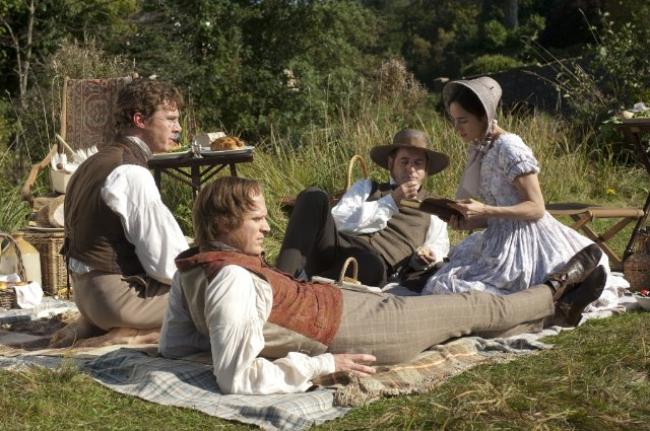 Scott wrote that this movie does not tell the story of the consequences Darwin faced for writing his controversial book, Origin of the Species. Rather, this film tells of the consequences that led up to it. We know of the ramification his book caused much of the world but how many of us know his personal history? I did not and so found some of this mildly interesting. The time period is perfectly brought to life through the costumes and locations. However, as my brothers wrote, the pacing is horribly slow and the subject dreadfully depressing.

Creation wants us to see Darwin as a test subject in his own research. Look at the scene where he teaches his children about natural selection by showing them the fox killing the rabbit. One daughter cries while the other points out that if the fox did not kill the rabbit, the fox's babies would starve. Darwin is showing his children the circle of life. It is repeated at other times throughout the film, such as when we see the baby bird fall from the nest as the mother is attempting to feed it. In his research, he sees death as a normal experience within the animal kingdom. The strong survive while the weak perish. Yet, when a death happens to him so very personally, it is anything but a cold part of the cycle of life. Was his daughter a victim of natural selection. Was his daughter somehow defective? Did she not possess something his other children did that enabled them not to catch Scarlett Fever. Today we know that Scarlett Fever is caused by a bacteria and it is only lucky that his other children were not affected by the contagious disease. Did she die because she was not fit enough to survive? Was it God's will. Perhaps it was just the randomness of life and death.

As my brothers wrote, Darwin was a church going man and his wife quite devout. His research into his theories of evolution came from a place of curiosity, not one motivated to excommunicating God. It is others who point out to him that he has killed God. Darwin seemed to agonize over this. There is a scene where Darwin prays in a church for God to save his ailing daughter. Some argue there is power in prayer, others are fond of the, "God works in mysterious ways." explanation. Either way, religious beliefs are based on faith, something a scientist cannot dispel, no matter what his evidence. When God does not save his daughter, Darwin turns away from him. He not only lost his faith but in one scene, is shown offending his pastor and for a period of time, distancing himself from his wife.

The movie tries very hard to stay neutral on the debate of evolution versus creationism. You could say they were being fair or you could call the film makers wimps, scared to take a stand. For all of their marital discord, Darwin and his wife are never shown arguing about his theories and their religious upbringing. They could have allowed each view one or two good points of contention at least. Instead, the big climactic moment comes with Darwin's wife yelling at him because he has never gotten over their daughter's death, followed by sex, the greatest human experience known to man. Or is it the greatest gift to man from God. Either way, this movie offers little but a meager look at the life of a man whose research is still being discussed so many decades after his death.