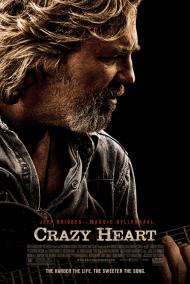 Crazy Heart is one of those movies that's winning lots of awards for its lead; Jeff Bridges. I know I certainly wouldn't have watched it if it hadn't been nominated for a couple of Oscars. Not that it's a bad film. It's actually pretty good, but I can't say that Bridges performance (as good as it is) is so special that it demands to be dominating Award's Season the way it is. It feels very much like one of those seasons that's rewarding a career rather than a single performance.

Bridges plays the aptly named Bad Blake, a faded country western singer who, when the movie opens, is doing a tour that consists of bowling alleys and bars. Bad is old school country. He's been married four times and has a son he hasn't seen in decades. He's a smoker, a drinker and a lover of loose women. His charms aren't quite what they once were though since he's now pushing sixty.

Fortunately for Bad, two things conspire to improve his life. He meets a much younger, single mother and aspiring journalist Jean (Maggie Gyllenhaal) whom he starts having an affair with after he gives her an interview. His budding relationship with her young son makes him begin to think about what he might have missed out with his own son.

The second thing that happens is that Bad's former protege Tommy (Farrell) offers Bad a large sum of money to write some songs for him. Although Bad is reluctant at first, he eventually agrees; even going so far as to perform as Tommy's opening act during one concert.

To give Bridges his due, he does a good job playing the burnt out old country singer. He gives a heartfelt performance that remains firmly grounded in reality. The drama never goes overboard and remains fairly subdued and I mean that entirely in a good way. Using Bad's son as an example, the resolution of that small subplot is low key and realistic and not what you might expect from a Hollywood film. He also handles the songs quite well and at least one of them is rather catchy.

Although Bridges does give a nice performance, this is a hard movie to get excited about. We've certainly seen the aging star trying to reconcile with his past before. There's not a lot unique about it. I can't see myself ever watching it again.

Given how many of the awards he's won so far this year, it's almost a dead cert that Bridges will win the Oscar. I can't say he doesn't deserve it and he will be remembered as an Oscar winner, but I doubt the movie itself will be remembered for long. It's good enough, just not very special or unique. 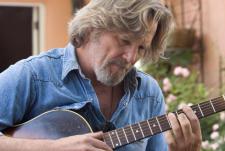 Yeah there isn’t much original about this one. Scott Cooper, in his directing debut, does not impress. Some of the camera angles seem poorly planned and the pacing is uneven and a bit sluggish. The story seems a bit pat as well. For example when Bad finally decides to go into rehab to quit drinking it seems incredibly effortless. At the end I thought, “Oh, that’s it”.

Bridges is good. He makes the character more interesting than the script does. I agree that the songs are decent. They all sound like they could be played on country radio. Especially, “Funny How Falling Feels Like Flying”. Scott, I assume that is the tune you found catchy. I was singing it for several hours after the movie was over.

Maggie Gyllenhaal gives a heartfelt performance as Bad’s much younger love interest. Her character is definitely there for support though as we don’t really learn much about her except that she is a single mom with bad taste in men.

I have a question. After watching the entire movie I couldn’t tell whether it was set in the present or some time within the last 25 years. The phones, clothes and cars made it seem like the late 1980’s or early ‘90’s. Not that it really matters but I like to know the year that my movies are set in. It’s a quirk of mine.

Patrick, I think the film takes place in a modern setting but the character of Bad Blake is a throw back to old style country artists like Waylon Jennings, Willy Nelson and Merle Haggard, whose life stories were a tragic mess of lost loves, intoxication and jail time.  The soundtrack features both new songs and several from the 50s and early 60s.  Part of the film's theme is the changing of the guard from an old style country troubadour and the modern country star.

Jeff Bridges looks the part but I never bought his act.  His singing is at best, adequate.  He acts the part well enough, but his blue jeans, cowboy hat and beard do half the work for him.  All he had to add was a country drawl.  This film won Bridges an Academy Award and that is all it will ever be remembered for.

Crazy Heart won awards and critical praise.  It earned five times its budget at the domestic box office.  It could have gone in a different direction though that would have made it a far more watchable and entertaining film.  Imagine George Straight and Tim Magraw in the parts played by Bridges and Farrell.  There would have been less awards, if any, but it would have played huge in certain parts of the country and the soundtrack would have been monumental.  Just as Gwyneth Paltrow was cast in Country Strong instead of Faith Hill, Bridges plays nothing more than a stereotype.

Like Scott, I never got excited about any aspect of this film.  I did not care if Blake ever made a comeback or not.  He pissed his career away.  Why should I give a damn if he comes back from the gutter he willingly put himself in.  I did not feel sorry for him when his son rejects him.  He abandoned his son years ago and he had that coming.

His relationship to Jean is completely unbelievable.  What does she see in him?  He later shows what a good baby sitter he can be until he loses her son in a bar, but why did she first like him?  Their love making scene is fairly gross as it looks like Jean is fucking her grandfather.  I get it when a young woman has sex with a rich old guy but he has nothing but problems to offer her.  Had Gyllenaal played Jean more as a dipshit I would have bought her affection for him.

There is nothing more pathetic than someone pissing away good things.  Bad Blake has done that his entire life, making him an extremely pathetic person.  He has had fame, money, respect and love but not the common sense of a child to treat those blessings accordingly.  A lifetime of fuck ups cannot be erased because he goes to rehab, sings a dreary song and apologizes to Jean.  He has to first make a large amount of money and then offer it to Jean.