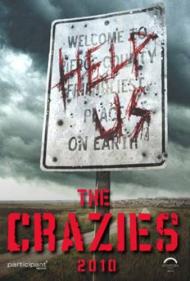 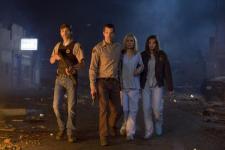 I guess this means they are unemployed.

The Crazies is a great example of the old adage, "less is more." In a small mid-western farming community, people start acting violently irrational. We are eventually told that it is because a plane, carrying a biological agent, has recently crashed into a nearby bog, contaminating the town's water supply.

David is the town's Sheriff, and his wife Judy, is the town's doctor. Talk about you small town power couple? She is expecting their first child. While attending the highschool baseball game, with most of the town, a man walks into the out field carrying a shotgun. David confronts him, but does not get any reaction from him. It does not end well, and so starts the towns descent into hell.

More and more people start acting crazy and violent until it seems the whole town has lost it. Lucky for David and Judy, their home is last on the water supply line. The military shows up to contain the population. The most eery scene is when David realizes the power and phone lines have been cut, "We're in trouble." he understates. David, Judy and a couple of friends try to get out of town, but the military proves to be as dangerous as the crazy citizens.

The thrust of the movie is one of escape, as the four fight to get out of town alive. There are several scary moments. I jumped when the man was searching for his wife and child in their home. Some gruesome scenes are just plain gross. At one point Judy has to hide among a bunch of fresh corpses.

Recently my family, and I, were trapped inside a automatic car wash, because the old lady driver in front of us kept breaking, so they had to shut down the whole line. This movie features a scene where the four people get attacked by some crazies, while their car is going through a car wash. My wife is scared of car washes as it is. I am glad she did not see this movie before that happened.

The Crazies does not waste time trying to explain why or how anything happens. David just kind of figures it all out as the movie goes on. The camera rarely leaves him or his wife. Not all of the questions get answered, but this is a very succinct, well paced film, that entertains from start to finish. 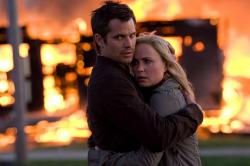 Timothy Olyphant and Radha Mitchell in The Crazies

This movie reminded me of 28 Days Later only on a smaller scale. It's really an offshoot of the zombie genre only with a virus making people crazy instead of undead. It explains just enough but never gets bogged down in the whys or wherefores I agree, but keeps the action and suspense ticking along.

You mention the car wash scene Eric and the moment when the dad is searching the house for his family and both of those scenes are great, but the moment that stands out for me is when the principal is walking down the line of people strapped to gurneys stabbing them with the pitch fork and the wife and her friend are at the end of the row as he keeps getting closer and closer.  Both women are helpless as they lie there and the suspense is built very well as he drags the pitchfork along on the floor.

One thing about this movie and others of this genre that has always bugged me is why don't the crazies, or zombies, or infected (call them what you will) ever attack each other? With zombies I guess you can say it's because they want living brains to eat, but this movie makes no explanation as to why they don't kill each other and often work together. It's a niggling little question though and one that doesn't harm the enjoyment of this movie.

The cast is made up of b-list actors. They're just recognizable even if you're not sure what you've seen them in. For the record Olyphant was the killer in Scream 2 and Radha Mitchell was Melinda in Melinda and Melinda. Their almost famous nature suits the plot's b-movie sensibility.

In a lot of ways I was also reminded of an old 1950s "It Came from Beyond the Stars" type movie. The small town setting with a limited cast, battling monsters, feels old-fashioned, but with a modern movie's budget and special effects. It just goes to show that somethings never go out of style or stop being enjoyable. 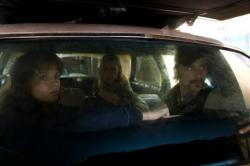 Stay away from this carwash!

I have to agree with my brothers on this one. The Crazies provides taut, often intense, action and thrills nearly from start to finish. Scott, you compared it to a zombie flick or an old 1950s sci/fi horror movie. The familiarity of the plot is probably also due to the fact that this is a remake.

The director included several homage’s to the original version. The police car they go back to get is a 1973 Ford LTD, which is the year the original The Crazies was released. One of the stars of that first version, Lynn Lowry, makes a cameo riding a bike through the deserted town.

Some of the dialogue is memorable. My favorite line was when David is determined to break his wife out of the military controlled high school. Another townsman tries to convince him to just try escaping without her. David says, in a matter of fact tone, “Don't ask me why I can't leave without my wife and I won't ask you why you can.” It is a great moment that really shows this guy’s mettle.

Eric, I too was freaked out by the carwash scene. It is well done and very frightening. I wonder if it was in the original movie. My only real complaint is in the ending. I detest open-ended, ambiguous denouements in horror movies. After everything this man and woman endure I would like to know unequivocally whether or not they survive at the end. 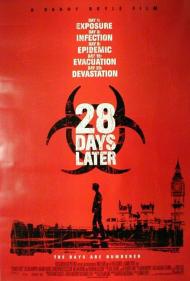 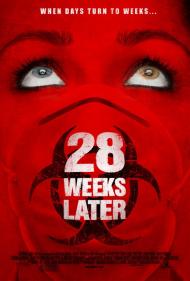