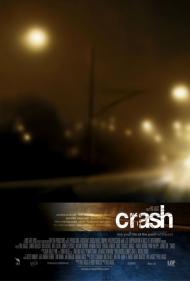 Crash features a bunch of familiar faces in an ensemble movie that explores racism in Los Angeles over the course of two days. It features some fine acting and has moments of fairly gripping drama, but it lacks the cohesiveness and deft character balancing of a Robert Altman movie, Short Cuts specifically seems to be an obvious inspiration.

The movie is really a series of situations in which people of various races confront each other in their everyday lives. What Crash succeeds at is showing that there are many different faces of racism and that most people (of all races) are racist to some degree. It acknowledges the fact that people are complex and that most of us have both good and bad qualities. It does a good job of not taking sides in the many racial incidents that occur.

Don Cheadle provides the emotional core and he does his usual fine job, but the acting standouts are Terrence Howard and Thandie Newton. They play a married couple who get pulled over by a racist cop (Matt Dillon). Howard has to stand by while the cop feels his wife up using the pretense of a frisk. Later he gets carjacked and has an intense confrontation with the police. Rapper Ludacris makes an impressive movie debut as a carjacker who sees racism against black people everywhere.

Some of the characters are given more screen time and are more fully fleshed out than others. Ryan Phillippe's Officer Hanson is one character you don't really get to know. In fact he is the only character that doesn't ring completely true.

While this movie raises important social issues it is a downer to watch. Anyone looking for escapist entertainment should look elsewhere. For an interesting and fair look at race in 21st Century America however, this is the movie. 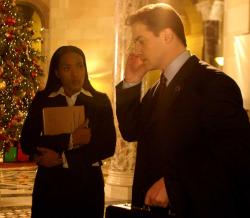 I agree partly with Patrick's assessment of this film. It is finely acted and it does lack true cohesiveness with some of the incidents that tie the characters together just too coincidental to ring true. I disagree when he says that this movie shows the many sides of racism. It really only shows one side of racism, it just shows it in a variety of people.

It is also painfully aware that the movie is attempting to make a statement and it won't stop until you are aware of its statement. Unfortunately, by being so overt, the statement loses impact. As an example, near the beginning of the film Sandra Bullock's character is walking down the street in an evening dress with her tuxedoed husband played by Brendan Fraser. When she sees two young black men walking towards her, she immediately pulls her purse tighter to her and pulls her wrap tightly across her shoulders. It's a good character note and you immediately get what she's doing. However, not content with letting the moment carry itself, we immediately cut to an unnecessary, several minute discussion between the two black men about what she did and why she did it.

In my own personal experience, I have witnessed racism or at least racist remarks and racist individuals. I have never though, outside of the Jerry Springer show, seen or met anyone with whom racism is their only subject of conversation. In this movie, it is all everyone ever talks about. This is not a subtle look at how racism affects our society. It is a movie in which nearly everyone is a complete and utter bigot and who isn't afraid to wear their bigotry on their sleeve. It seems to me that in today's politically correct environment that a great deal of racism has gone underground and is much more subtle, but none of that is evident here where all of the racism is in your face. Every time in this movie when two people of different nationalities are brought together, a racist remark is made.

Patrick is right. This movie is a downer. But I would call its look at racism in the 21st-century more pretentious than fair. 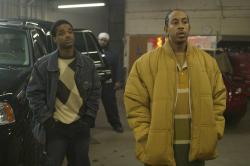 Larenz Tate and Ludacris in Crash.

On the nose Scott! This is one of the most pretentious movies I have watched in a long time. The interviews, on the DVD, have the film makers bragging up how they made sure the character's honestly and bluntly talk about racism in the movie. They act as if this is something unique and new. Archie Bunker and his neighbors, The Jefferson's, were this blunt about racism 35 years ago.

Patrick wrote that this movie shows, "...most people (of all races) are racist to some degree." The movie may have intended to do that, but, none of the Latin characters are shown in that light. Other than Rita confronting an ornery woman at the beginning of the movie all Latins are portrayed as very good people. There is Sandra Bullock's maid who takes the kids to school and unselfishly comforts her bigoted boss. Then, of course, there is the locksmith. This guys works ungodly hours with ungrateful customers and still has time to comfort his daughter in a scene that would put Father Knows Best to shame. I am not sure if the writer of this movie intended it that way or did he just get tired of having every character act ignorantly.

Patrick also wrote that Ryan Phillipe's character did not ring true. He needed at least one more scene to flesh out his transformation from hero to paranoid cop. For me though, the most unrealistic character was that of Matt Dillon's. His cop is just too many stereotypes thrown together to seem real. He is mad at his fathers health coverage so he takes it out on black people? Every police character in this movie sees every thing by race. I wonder if the LAPD ever gets tired of Hollywood bashing it?

This film is true liberal politics. They point out an obvious problem, as if this makes them great people, but they never make a suggestion on how to fix it. You know, just like when liberals scream we need to not be dependent on foreign oil but don't want us to dig in An war. Or when they say we need to find other sources of energy like wind power, but then liberals like Ted Kennedy refuses to allow them near his family home on Martha's Vineyard.

Crash may provoke some conversations, but it's sledge hammer of a message gets over done to the point of exhaustion. The film makers obviously forgot the old adage that sometimes, less is more.