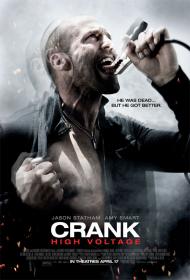 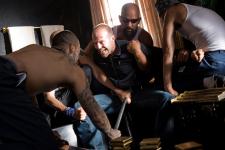 If the man survived a fall from a plane. Electrocuting his testicles will not hurt him.

The first line in Scott’s Crank review compares the movie to a videogame. The very first scene in Crank: High Voltage is of Chelios in old school videogame animation. Chelios falls from a plane, bounces off a van and smacks onto the pavement. He lives, and thus starts the ridiculous sequel to one of the biggest movie surprises of 2006.

After having his body shoveled off of the street by a Chinese gang, he is taken to a back alley surgical facility where his heart is removed and replaced by a mechanical one that runs on a battery. Upon hearing that his penis is the next body part they intend to harvest from him, he decides to break out. He then begins a trek through some bad neighborhoods in desperate search for his heart. He leaves a trail of blood and corpses. He only stops occasionally to recharge his battery in more and more unbelievable ways.

Along the way, he runs into several people from the first movie, including his girlfriend Eve who is now a stripper. This movie has the biggest variety of naked breast that I have ever seen. In one particularly gross scene, a stripper even gets shot in her implants. The silicone oozes out of her as she screams. Not only is the nudity in abundance, but Statham and Smart do a very graphic sex scene in the middle of a horse race track, as onlookers cheer them on.

The action is all there. Statham never seems to run out of people to beat up or kill. The first movie was quite unique in it’s frenetic direction, and editing. This time around they go too far. At one point Statham and a guy he is about to fight suddenly become giant as in some Power Rangers episode. They fight inside an electrical power plant, demolishing everything like King Kong battling The Iron Giant.

It tries to have humor by introducing some odd characters. There is the crazy Chinese whore who keeps chasing Chelios around. There is also the Mexican gay biker who has physical turrets syndrome. Nothing here comes close to the humor found in the first film, and as such, High Voltage has none of the original film's charm.

I wouldn't say this movie has none of the charm of the first movie Eric, but it definitely has less. The first Crank was so far out there that the only place for this one to go is too far.

However, there are some things to enjoy about it. Perhaps my favorite scene is the flashback to Chev's childhood when he appears on the talk show with his mother played by Ginger Spice herself, Geri Halliwell. The humor does though, rely far too much on shock value and grossness.

The best thing this movie has going for it is Jason Statham. He has a brutish Cockney charm here that makes him likable despite being a violent psychopath. I recently watched Statham in the boring, charmless Death Race. The makers of that film somehow managed to suppress all of Statham's cocksure charisma. At least the makers of this one are smart enough to let him do his thing unhindered here.

Like you say Eric, there is a lot of tits and ass on display here, but very little of it is sexy. In fact, practically every time you see a nipple, you can be fairly sure you're about to see someone get killed.

The only way to enjoy this movie is to not take it all seriously. In no way is it trying to be serious or realistic. Don't expect it to follow any logical rules. If it did, Chelios would be dead 500 times over. The makers are obviously video game fans and that's the way the story is told. The scene you mention Eric, where Chelios and the villain become giants is a perfect example of that. It would never happen in real life, but things like that happen all the time in video games.

The first Crank was a fun adrenaline rush and this one is trying too hard to match it. It succeeds for a while, but too soon it runs out of power. 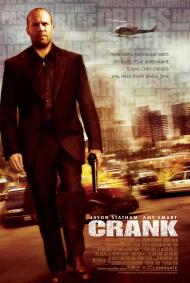