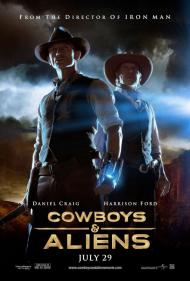 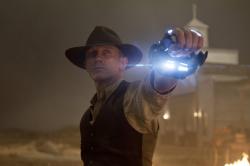 The ingredients are certainly here for a good time at the movies. A couple of big name stars, an intriguing premise, some big budget special effects and a few action scenes. Unfortunately though, what's missing from the list is a sense of fun and without it the other ingredients never quite come together the way they should. The finished product isn't horrible, just rather lackluster.

Not surprisingly, the movie tells the story of some cowboys and some aliens. It starts with Daniel Craig's character waking up in the middle of nowhere with no memory, no body hair, no body fat and barely any clothes. The one thing he does have is an odd metal bracelet on one arm that he can't remove. After kicking the ass of three disreputable men who stumble upon him, Craig makes his way into the nearest town where he is arrested as the aptly named criminal, Jake Lonergan (Lonergan/Loner Gun). Before he can be taken away however, the town is attacked by an alien spaceship and a group of townspeople are kidnapped. During the attack Lonergan discovers that the metal bracelet is a weapon that can destroy the aliens. Soon he and a group of townsfolk have saddled up and are off on a rescue mission.

The story starts well. Craig is pretty badass as the enigmatic stranger. In fact, the best part of the movie is the section right up until the aliens make their appearance. The mystery of who he is and how he got there is much more intriguing than the answers. Although I don't care for Craig as James Bond, I do think that he's a good actor and he certainly handles the action scenes well enough. He reminds me a bit of Steve McQueen.

Naturally, as a child of the 1980s, I enjoyed seeing Harrison Ford as well. He plays an interesting character, the equally aptly named rancher Woodrow Dolarhyde.  At the beginning of the film he appears to be the villain of the piece, but as it goes along he comes around to being one of the good guys, and not quite as grouchy as he started. Ford as the villain intrigued me and I wish they'd gone further with it.

The action scenes are okay, but I was never emotionally invested in them. It's quite clear from the beginning who is going to live and who is going to die. The posse picks up a group of outlaws and an Indian tribe on their journey so there are lots of targets for the aliens to shoot and kill while still allowing the main characters to survive.

There are some dubious plot points in the story. The aliens are supposedly studying the humans looking for weaknesses, but these aliens are so much more technologically advanced than humanity,  would that even be necessary? And if it was, would they need hundreds of humans to study? I wouldn't think it would take them very long to figure out what killsus. It is eventually revealed how Jake came into possession of the bracelet and it's just silly and not very plausible.

Personality wise the aliens are a blank slate. They look and behave like monsters and yet they must be intelligent enough to build their weapons and spaceships. They don't even have enough personality to really make you hate them. There's never a moment where I was charged up to see them die or that strongly cheering on the good guys to wipe them out.

As a generic action film with an interesting premise, Cowboys & Aliens is okay, but with a better script it could have been so much more. 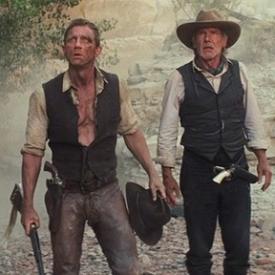 One of my first thoughts after watching this movie was similar to what Scott wrote. There is no moment where I was really charged up to see the cowboys kill the aliens.  There should never be an emotional distance from the characters and their goal, and the audience rooting for them.  This is caused by the audience never being given enough time to get to know anyone on screen.

Many potentially interesting characters pop up quickly only to disappear into the background.  Doc, Nat Colorado and Meacham never get enough screen time to allow the audience to care enough about them.  A newly wed trying to run a business and prove something to his wife, or an Indian adopted by a rich rancher, or a gun toting preacher could have all become fascinating characters if given the time.  Another idea, would have been for Favreau to have shot the entire film from the perspective of the boy, Emmett.  That way, explanations would be moot as we would only learn things from his point of view.

The payoff for the minimal characterization is that Favreau made this a straight up action film, and it mostly succeeds.  It jumps very quickly from one action scene to the next.  Jake gets into one fight after another.  There is always something going on to keep your interest.  From being stalked by an alien in an upside down boat, to being captured by Indians, this film is matinee movie making overload.  The action is packed tight into it's nearly 2 hour running time.  The pacing never lags.

Although filled with shoot outs, horseback rides across wide open country and sneaking into canyons, there is a complete lack of a jester.  One person in the posse should have been a comic relief, making quips about others and the aliens.  I am sure someone could have come up with one "a cowboy and a alien walk into a bar" joke.

Scott pointed out the leads symbolic names, but I liked the town being aptly named Absolution.   Jake has a criminal past while Dolarhyde is rich and arrogant with poor parenting skills.  After fighting the aliens, Jake and Dolarhyde supposedly end up up being absolved of their sins.  That is all nice and tidy but since we never got to know either them well enough, I never cared if they changed or not. 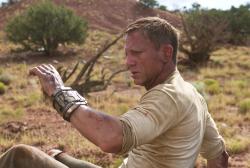 What is this on my arm? Who am I? Where am I? and most importantly, what the hell am I doing in this movie?

Both my brothers were far too kind to this movie. This Western/Science Fiction mash-up is a hot scrambled mess. It lacks character development, any sense of tension, has forgettable dialogue, completely ridiculous action sequences and a dumb plot. Jon Favreau’s direction has all the sophistication of a kindergarten recess. I didn’t like it.

The action scenes are stupid. When the aliens first attack from the sky at night they shoot up the town but somehow never hit any of the stars, even though they are standing in the open. At the climax they demonstrate the same poor aim. Hell they couldn’t even graduate from a Storm Trooper school of marksmanship.

Also they are shown as big, strong and ferocious yet somehow Indians on horseback are able to kill them using wooden spears. They are also supposedly far advanced technologically speaking but they act like dumb beasts. The entire set-up is idiotic.

Harrison Ford goes from being a gruff, mean old man that everyone in town fears to this benevolent hero. I missed the scene where it explained why his entire personality changed so abruptly. Daniel Craig is a blank slate.

I do agree with Eric that the supporting characters are the most interesting but they are never fully developed. Cowboys & Aliens gets my vote as the worst big-budget popcorn movie of 2011.