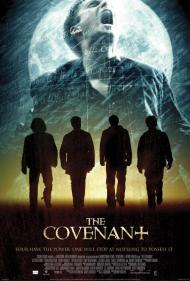 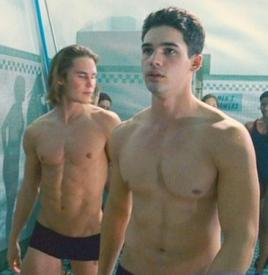 Taylor Kitsch and Steve Strait in The Covenant.

With just a little more effort, The Covenant could have been a classic example of a movie so bad that it's actually good. Sadly, it doesn't even achieve that. Instead, this supernatural teen soap opera, is just generically dull. It's characters are dull, the actors are generic soap opera types, and the action, while pretty to look at some times, is completely meaningless when you don't care who lives or dies. Only the setup to the plot is intriguing, but its so mangled in its execution, that it hardly matters.

Set at an upscale Private High-School in the North-East, the story revolves around the descendants of five magical families. Four sons of five families who survived the witch burnings of the 1600s rule the school, all of them good looking, popular and very fit. The fifth (and least stable) son, from the family whom the other four families had thought died out, returns with the intent of stealing the power of the others. Along the way there is some soap opera stuff with teen love and jealousy, but no sex and only a few very brief shots of naked bums, more male than female. By the time the final battle occurs between the sons, the only thing I was caring about was that they get it over with so the movie would finally end.

With labor laws governing minors, I understand why directors cast twenty-somethings to play high-schoolers, but why do they so often insist on hiring twenty-somethings who look like twenty-somethings. Why not set this movie in college? There isn't one person in this movie who you would possibly believe is still in school. And why do so many high-school movies have scenes set in bars? If you must hire older actors to play students, couldn't you at least try to find some who look like they wouldn't have had to flunk five or six grades to still be in school?

As Joss Whedon proved with Buffy: The Vampire Slayer (the TV series, not the movie), magic and the supernatural can be an effective allegory to dealing with the trials and tribulations of growing up. This movie does make some references to using magic being similar to taking drugs. They're both addictive and if used to much, can both kill you, but it never does anything with the comparison. I'm not suggesting that it should have been some heavy-handed anti-drug movie, but that facet could have been explored a bit more to possibly add some kind of, any kind of, depth to this flat movie.

What could have been a camp classic, sort of a Lost Boys of the 2000s, is instead just a dull, listless movie of the kind you expect to see dumped in September, in between the blockbusters and the Oscar contenders. 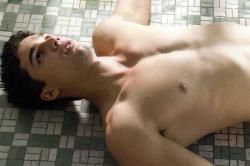 Steven Strait in The Covenant.

Scott, I think you have not been around many high school students recently. The cast of The Covenant were all in their early 20's when they filmed this movie and Strait was only 19 when he got the lead role. They all look the part well enough. Even if they do look older than they should, the script explains that whenever they use their powers it ages them. In other words Scott, their age is hardly an issue.

The Covenant is unique in that it is about young men with witching powers. Most movies and television shows are about young girl witches like The Craft and Charmed. Of course there is that boy wizard with the lightning scar on his forehead, but he is in a world all of his own. In fact, The Covenant's best line is when one of the boy witches says, "Harry Potter can kiss my ass!"

The movie centers on Caleb, but not enough. Like the worst episodes of Smallville, The Covenant gives too much screen time to superfluous characters. A young man with magic abilities trying to keep loyal to his witch brethren, and ancestry, while trying to fit into society could have been an interesting film. Instead of a fascinating character, we get Caleb as merely the level headed leader of a bunch of arrogant, jock type guys who drink, carouse and use their powers to look up girl's skirts. The movie hints at so much that never gets explored. Like the better episodes of Smallville, we should have had more of Caleb dealing with who he is and how he struggles to make it work, and less of his stereotypical friends.

The special effects all worked for me and the action scenes were done well enough. The problem with the fight scenes, especially the final one, is that there is very little motive for them. I got the feeling that some plot exposition was left on the cutting room floor. I just watched this film and I cannot remember why Chase is after Caleb's powers other than for powers sake. I am sure there is more to it than that. Wasn't there? 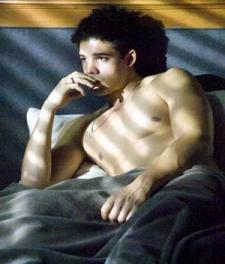 Actually Eric, that was pretty much the only reason, except maybe for some jealousy. Not that it matters really. I agree with both you and Scott about this movie, but I will add a gay man’s perspective. The Covenant has become something of a cult hit among gay men. It centers around a group of hot males with a secret. Certainly something that any gay man can identify with. And as you mentioned Scott there are more naked male asses on display than female. OK, so this is a bad movie but for me it wasn’t boring.