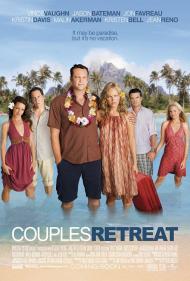 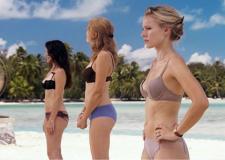 Kristin Davis, Marlin Akerman and Kristen Bell in their underwear in Couples Retreat.

Couples Retreat isn't a horrible movie. There are some funny parts and you can't fault the cast. It's just not nearly as funny as it should or could be and it never gels together to form anything very good. To be honest, if you've seen the previews, you've seen the funniest parts of the movie.

The plot is simple, four different couples go away to a resort together. One couple (Justin Bateman and Kristen Bell) are considering getting a divorce, so the trip is their idea, as a big part of the vacation package is couple's counseling. Jon Favreau and Kristin Davis are former high-school sweethearts who are only staying together for their daughter. Faizon Love is recently divorced and is dating a much younger woman who he is having a hard time keeping up with. And the last couple, played by Vince Vaughn and Malin Akerman, are the "normal" couple; happily married, 2.6 kids, etc.

Of the cast, Vaughn is the highlight. He plays the usual laid back slacker type character that he plays so well and most of the laughs that are in the movie, are provided by him. Most of his funny lines though are random one-liners that have no real bearing on the story. Bateman and Bell, also provide a few chuckles as the overly organized couple. Of the smaller parts Peter Serafinowicz (Shaun of the Dead and the voice of Darth Maul) is amusing, except when he's appearing in one of the longer scenes that is nothing more than an extended commercial for Guitar Hero.

Some of the worst parts of the movie are when it tries to have heart. The ending of the movie tries to be sweet, but is just phony and saccharine. It's like a long and mediocre sitcom episode. The opening and closing scenes feature a cute kid using a show toilet in a plumbing store in scenes that are just so cutesy that I swear I threw up in my mouth a little bit.

Although Vaughn is funny, he's very much in family-friendly mode here which constrains his normal ribald humor. I definitely prefer him when he's more R-rated.

This is one of those movies where there is absolutely no good reason for you to see it at the theater. It's definitely not worth the money it takes to get there, but a DVD rental or a download is about a small enough effort that it just might equal the laughs you're likely to get from it.

Jason Bateman, Vince Vaughn and Jon Favreau in the buff in Couple Retreat

The problems the couple are going through are meant for an audience of couples to relate to. One couple cannot conceive, and have focused so much on that, they have forgotten how to relate to each other in any other way. Another couple married too young. They are staying together for their child, and count the days until she goes off to college. One couple has divorced as she wanted to play the field.

As Scott wrote, Vaughn and Akerman play the most solid couple in the group. One scene has Akerman ask Vaughn about some tile she wants to buy. He responds in a nonchalant way, that he likes them. This disapoints her, as she wanted to see a bigger reaction. He then gives her one, when she tells him the price. I have lived that moment countless times.

This is a film about married couples, yet the best chemistry is that of long time friends Vaughn and Favreau. The scene in the sauna is like watching a real conversation. These two are so comfortable with each other that they are the most convincing couple in the movie. These guys have been making movies together since Swingers, when they both weighed a lot less.

Speaking of weight; why are all of the husbands out of shape while the wives are all bikini ready? Any number of recognizable actors could have played the role of Shane. I wondered why he was cast, until the strip scene. The grotesquely overweight Faizon Love, makes the film's stars, Favreau and Vaughn, look slim.

The resolution to all of the couples problems is too simplistic. They just needed to party! If that is the case, then drunks must have the happiest marriages, right?