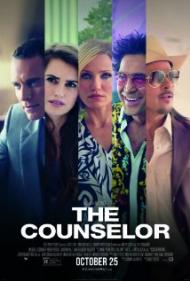 Javier Bardem and Cameron Diaz in The Counselor.

The Counselor marks the original screenplay debut from acclaimed novelist Cormac McCarthy. His previous novels The Road and No Country for Old Men were successfully turned into movies (although McCarthy didn't adapt those screenplays). After seeing his first attempt at writing an original script my advice to him is to stick to writing novels.

Michael Fassbender plays the unnamed titular protagonist in this bloated, slow-paced cautionary tale. He's a lawyer who, for reasons never explained beyond basic human greed, gets involved in a drug smuggling cartel that operates between Mexico and the United States. Pretty much everyone else involved in the deal warns the counselor (as he is called by everyone in the movie) that he is getting in over his head but to no avail. What follows is a downward spiral that is as tedious to sit through as it is predictable.

The story opens with the counselor performing oral sex on his girlfriend (Penelope Cruz). The stilted, overly-talky dialogue begins here and doesn't let up till the end credits. Cameron Diaz and Javier Bardem bring a bit of life to the movie as a drug dealing power couple. They own a pair of cheetahs and Diaz has paw print tattoos running up her back. There is one gratuitious scene where Diaz masturbates by rubbing her naked vagina on the windsheild of a car while Bardem watches from the front passenger seat (see photo). It is the closest the movie ever comes to an original moment.

Brad Pitt is wasted in a rather small role. This is his second movie with director Ridley Scott, the first being his breakout role in Thelma & Louise. He evens dons a cowboy hat in one scene like his character in that earlier movie, but it only serves to emphasize that more than two decades have passed, and time hasn't been particularly kind to Pitt's countenance.

Here's an example of how unoriginal the script is. Early on there is a scene where the counselor is told, in great detail, about a specific weapon. It's a wire that goes around a person's neck and then tightens like a noose, cutting the carotid artery and killing the person in a matter of seconds. I wonder if that weapon will show up later in the movie?

The talented cast, and stylish direction by Scott, could have worked with a better script. McCarthy demonstrates no ear for dialogue. In real life people don't talk in such long winded sentences. How bad is The Counselor? Well at the end there were actual boos from the audience I watched it with and I didn't disagree with them. 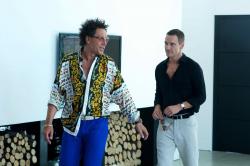 Javier Bardem and Michael Fassbender in The Counselor.

A big name cast is no guarantee of a good movie, but when this many famous faces agree to appear in one movie, you assume it's because they must have seen something special in the script. Perhaps in this case though, they simply assumed that any Cormac McCarthy script, directed by Ridley Scott was bound to be good. I think that's what the studio was hoping audiences would think as well. On paper, this looks like a great idea. Unfortunately, that's where the idea should have stayed.

The big two problems are the glacial pace and long winded conversations. The dialogue is sometimes clever, but more often just dull. It's okay in movies that characters don't talk like real people, but highly stylized conversation needs to help the story not hinder it. This is supposed to be a thriller, but these rambling conversations undercut the tension and make a slow story even slower. Here's an example of the dialogue. This piece comes from the film's end when a member of a drug cartel issues the Counselor with a warning, "Yes. At the understanding that life is not going to take you back. You are the world you have created. And when you cease to exist, this world that you have created will also cease to exist. But for those with the understanding that they're living the last days of the world, death acquires a different meaning. The extinction of all reality is a concept no resignation can encompass. And then, all the grand designs and all the grand plans will be finally exposed and revealed for what they are." There are some interesting ideas there, but it's not exactly going to help the pace.

Another problem with the story is that these aren't sympathetic characters at all. Penelope Cruz is the closest thing to an innocent bystander, but even she seems to be aware that her finacee's money comes from an association with criminals. Without generating sympathy, there needs to at least be a reason for us to take an interest in them. Fassbender's character isn't just nameless, but also with so little background or personality given that he's almost a non-entity. That we care what happens to him at all is down to Fassbender's performance, but even then it's impossible to get beyond the "you reap what you sow" feeling. Cameron Diaz's character, Malkina, should have been a scene stealer. The kind of character we love to hate. She's evil and ruthless, but is given zero charisma and no sense of fun. Instead of a femme fatale, she's merely psychopathic. Patrick called Brad Pitt wasted, but his was one of the few parts I enjoyed. There's a twinkle in his eye that brings some life to his character that is missing in the other cast members. Although I do agree with my brother that Pitt isn't looking his best here. Director Scott seems to be deliberately shooting him at unflattering angles.

There are moments in this movie that hint at what it could have been, but they're few and far between. McCarthy might write great novels, but he has much to learn about writing scripts. Less long winded speeches, a little more clarity as to what was going on with all the betrayals during the drug deals, and greater character motivations and background would have gone a long way to making this more suitable for the big screen. 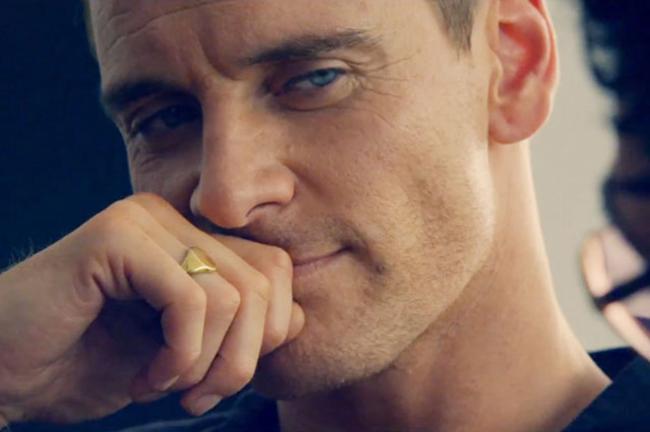 Michael Fassbender in The Counselor

As Patrick noted, McCarthy writes dialogue for his actors to recite that no one in real life would ever actually say. However, I also agree with Scott that some of the dialogue is a bit clever and sometimes humorous, intended or not. Bardem to Diaz, who just said something rude, “You don’t think that’s a bit cold” Diaz, “I think truth has no temperature.” When Fassbender looks at diamonds for an engagement ring to give Cruz, he tells the jeweler, “I don’t want to give her a diamond so big she’ll be afraid to wear it.” Clearly the jeweler knows his job, and women, as he replies, “She’s probably more courageous than you think.”

However, those are just cute but pointless quips buried in long boring stretches of dialogue and scenes. Even if the conversation with the jeweler, about admiration and flaws, is supposed to be in some way symbolic, who cares? We first see Fassbender in bed with Cruz, where they talk all through sex. Then he talks to the jeweler about a diamond and gets advice. Finally we get the scene of Fassbender proposing to Cruz in a restaurant. Those scenes may have worked in the book but within the time constraints of a movie all we need is a single scene of Fassbender proposing to Cruz. Hell, he could have done it when they were in bed and his face was between her thighs. What woman would turn down cunnilingus and a diamond?

Anyway…Fassbender spends too much on the ring and goes to their drug dealer friend, Bardem, to make some cash. Bardem makes an attorney joke to Fassbender, “I always thought a law degree was a license to steal.” That was hilarious. I wonder why there are not more lawyer jokes. Then Fassbender talks to Pitt who also has some good lines, “You don’t know someone until you know what they want.” He explains to Fassbender that Jesus wasn’t born in Mexico, “Because they couldn’t find three wise men or any virgins.” Then Fassbender goes to a prison and talks to Rosie Perez and the movie continues as such with one needless scene after another. We see a truck of drugs being moved and delivered and Perez’s son on his really fast motorcycle. Blah blah blah.

I was nearly half way in and was still waiting for the plot to get going. Finally it does, briefly, with the shipment of drugs getting stolen and Fassbender being blamed for obscure reasons. The tension builds with everyone running for cover. People start dying and Fassbender finds he is in deeper than he ever expected even though he was, as Patrick wrote, repeatedly warned over and over again that he was getting in way over his head. Get it? His job is to give counsel but he never takes it himself.

Fassbender does some good work here but the script never allows for him to become a solid character. All we know is that he is in love and makes a very stupid illegal business decision. I should have felt something for him as his hopes and dreams slip away from him but I did not. Too much time was given to other characters, and the movie stars portraying them, for him to become anything more than a suit wearing romantic idiot.

The only person beyond Fassbender who kept me, at all, interested was Cameron Diaz. She looks good with the cheetah or lying topless with Cruz by the pool. Her confessional scene is interesting and of course her sex act on the car is the most talked about scene in the entire movie. As soon as we meet her and Bardem we know that she is the smarter of the two.

The Counselor could have worked. The basic idea and story has some possibilities but as Scott noted, McCarthy was not able to turn his novel into a cohesive script.