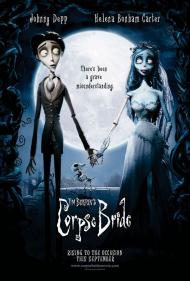 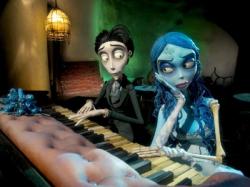 Like most of Tim Burton's work, Corpse Bride is style over substance. Visually creative with its animated Victorian setting, it lacks sufficient quantities of heart and humor to really be a great film. That is to say, your eyes will never get bored, but it's not a movie you'll probably ever care to see again.

This is the second Burton film this year to feature Johnny Depp in the lead role, following the highly successful and much more enjoyable, Charlie and the Chocolate Factory. Depp provides the voice for Victor Von Dort, a nervous young man who finds himself in an arranged marriage with a girl whom he's never even met. His parents are rich, but in trade, while her parents are titled, but dirt poor. To both his and Victoria's (his betrothed) relief, the two are made for each other. But later, when Victor is unable to complete his wedding vows during the rehearsal, the priest sends him outside to practice. While walking through the woods, he places the wedding band on a twig sticking up from the ground. To his horror, the twig turns out to be the bony finger of a murdered woman whose spirit has vowed to only awaken from the touch of her true love, and she's convinced that it's Victor.

Emily, the corpse bride (voiced by Burton's real-life wife Helena Bonham Carter) then drags Victor down to the land of the dead proclaiming to everyone that they are married. Victor's living fiancée, meanwhile, fears that Victor is gone for good. Her parents leap at the offer for her hand from the villainous, but also titled Baron Barkis. It is then up to Victor to somehow disentangle himself from the corpse bride and win back his living love.

The biggest shock of watching this movie came only a few seconds into it. What the previews have kept completely a secret is that this cartoon is also a musical. And like Charlie and the Chocolate Factory, the songs are just plain god awful. They're dreary Broadway song wannabes that serve only to extend the film's running time. Neither catchy nor necessary, it's no wonder to me that the film's marketing is keeping them a secret.

As you might expect from Burton, it is in the visual details that the movie really shines. The only reason that I can imagine wanting to watch this movie again is to catch all the little things going on in the frame at any one time. If only as much care was put into the script as was obviously put into the look.

The voice work is provided by a long list of notable British actors, including Christopher Lee, Emily Watson, Richard E. Grant, Joanna Lumley, Jane Horrocks, among others. But none of them are given much to work with, as the dialogue clearly takes a backseat to the animation.

After Big Fish and Charlie and the Chocolate Factory, I was finally starting to forgive Burton for what he did to the Batman movies and Planet of the Apes. This movie though, has set my opinion of him back almost to where it was before those great films. I'm sure avid Burton fans will appreciate this one, but it left me as cold as the dead. 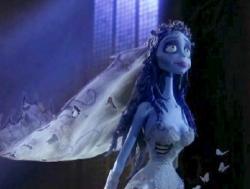 Helena Bonham Carter is the voice of The Corpse Bride.

Who the hell did Tim Burton make this movie for? It is PG for kids, yet there is not enough humor to keep them interested. It is for girls in that it is all about brides and getting married, but half the cast are corpes so it is not really a girly movie. There is hardly any action to keep boys interested. Burton may have thought this was a brilliant film to make, but do the people who finance his films first consider who else will think it is brilliant?

Tim Burton only succeeds when he has solid material that allows for his artistic direction to take off. That was the case for Big Fish and Charlie and The Chocolate Factory. The material here is completely lackluster. Scott mentioned that the visuals were interesting. I was so bored with the entire movie that the visuals meant nothing to me. They were not enough to liven this boring movie.