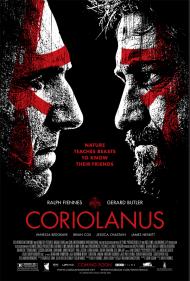 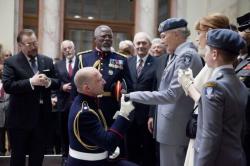 Coriolanus is one of Shakespeare's lesser known tragedies. Ralph Fiennes stars and makes his directorial debut with this modern interpretation of the tale of a Roman general spurned by his own people and now on a path seeking vengeance. While it features a few well filmed battle scenes and some superb acting -including the supporting cast - Coriolanus isn't a very sympathetic character and therefore it's difficult to get emotionally invested in his cause.

The film is set in modern times in, as a caption informs us, "a place calling itself Rome". General Caius Maritus (Fiennes) is a great warrior and military leader, but not very popular with the people. He breaks up a riot over grain shortages by telling the crowd that they're not worthy of it. When Rome is invaded by the neighboring Volscian army, lead by Caius' bitter enemy Aufidius (Butler), it is Caius who personally guides the Roman army to victory on the ground  during a graphically violent battle at the city of Corioles. Following the brief war, Caius returns to Rome in triumph where he is awarded the name Coriolanus in honor of the battle.

When allies of Coriolanus seek to put him in political office however, several of his rivals band together with a group of citizens to brand him a traitor. Following a public trial in the media Coriolanus is banished from the city of Rome. Bitter and angry, he seeks out his old enemy Aufidius and offers to help him sack Rome.

I really enjoyed the modern spin on Shakespeare that Fiennes and company put into this film. There have been many other modern interpretations, but I've never seen it done quite so seamlessly. Where the actual play might have had a narrator, here parts of the stories can be told via news reports and yes, even the news reader speaks in iambic pentameter. The only area where the modernization doesn't quite work is in the voting mechanism for installing Coriolanus in political office. Following the Senate's nomination, he must go and speak to the people in public to get their approval, but rather than having everyone in the country cast a vote using modern means, he simply speaks to one smallish crowd of people who voice their consent. It's the only portion of the storytelling that didn't really work for me.

Fiennes does a good job in the lead role as the Roman General whose tragic flaw is the sin of Pride. He refuses to humble himself before the people. His opinion of democracy is low, stating that for the common people to have power over the nobles is like allowing "crows to peck the eagles". When he is rebuked by the people, it is his pride that is hurt most and he is quick to seek his revenge. Unlike many of Shakespeare's tragic heroes, Coriolanus isn't prone to soliloquies and this can make it difficult to learn what's going on inside him and he comes across rather more shallow than a character like Hamlet, for example.

Two of the supporting players are scene stealers. Vanessa Redgrave gets the juicy role of Coriolanus' mother. She is fiercely proud of her son and his many scars, which she deems badges of honor, stating that she would rather see him die in battle than avoid it in fear and shame. Following her son's banishment she stands up to the politicians who besmirched her son's name, and is more than a match for them, verbally and physically.

Fiennes does a good job at directing, keeping the film moving and providing plenty of tension. He relies a little too much on handheld camera work for my taste, but apart from that I thought he did a fine job.

This isn't the greatest of Shakespeare's plays, but it is a great stage to screen adaptation. While I wasn't caught up in the tragedy of it all, I was at least entertained from start to finish.