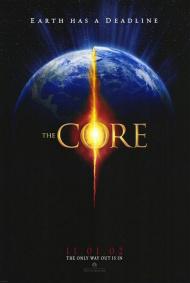 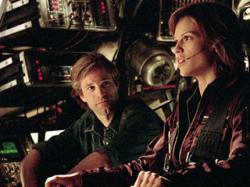 Aaron Eckhart and Hilary Swank in The Core.

The Core is an outright bore. It is B grade Sci-Fi. There are more special effects than originality. It is as predictable in Hollywood plot as it is in Hollywood politics.

Unbeknownst to the world, some political types have done some digging in Alaska. This inadvertently has done damage to the Earth's core. Get it. Drilling in Alaska is bad. The Earth's core has stopped spinning and electromagnetic fields are now going haywire. Don't waste your time trying to make sense of the set up. Just accept it. Because of this, huge disasters all over the world are occurring.

To save the day, a group of peopled are going to journey to the center of the Earth, detonate some nukes and all will be well again. Aaron Eckhart is still playing the same character from Possession. Only this time his professor teaches geology instead of British literature. Hilary Swank plays a Space Shuttle pilot. Actually she is the copilot, but how long do you think the actor (with much lower billing) playing the pilot is going to live? In real life the people who go up in the shuttle are always at least 40. This is Hollywood, babes Swank's age have all kinds of jobs there.

Stanley Tucci plays an arrogant scientist who first worked with those politicians who dug in Alaska. So you just know that stereotype conservative is going to live just long enough to get a environmentally moral lesson. There is the required minority, a black man who built the machine that will take them into the earth. Last, but most important is the French guy. Can you believe it, a French guy actually playing the part of a hero. Well, at least he doesn't live the whole movie. Oh come on, anyone who ever goes to the movies can look at the setup and tell who will and who won't live.

The political angle in this movie is as annoying as the characters. I loved the line "The worlds worst weapons of mass destructive are going to be used to save it." Give me a tissue, I am all weepy. In one scene Eckhart's professor has to go before a U.N. type group to explain what must be done to save the world. Remember folks, the U.N. runs the world. We have to go to them first. Nudge, nudge, wink, wink.

The special effects are excellent in this movie. So what? They do not advance the plot. They are just occasionally thrown in for shock and awe. Eckhart and Swank provide the most awkward quality to this movie. They both act their ass off. They play the entire movie so straight. I mean Eckhart really had me convinced he cared that the French guy was going to die.

This movie is so unremarkable that it will soon be forgotten. The makers of it should be thrilled of that. I know I am having a hard time remembering it as I am writing this review. How is it that Hollywood can't get their ass around to making a new Superman movie but they green light crap like this?