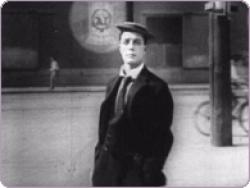 Years ago I saw a small silent film clip on television of a man being chased by what appeared to be hundreds of policemen. It may have been used for a commercial, but I am not sure. Either way, I had no idea where it was originally from but the image always stayed with me. Recently I finally found the film that scene comes from. It is from Buster Keaton's 1922 classic short Cops.

The movie opens with Buster standing in front of some bars appearing to be in jail. The camera pulls back and we see that he is looking through a gate to the woman he loves who tells him that she will not marry him until he becomes a business man. Buster then goes through a series of events and coincidences. He comes into money, loses the money, accidentaly steals someone's furniture, horse and wagon. He absentmindedly helps a terrorist attack the police, and finally ends up being pursued by hundreds of policemen.

The movie has a quick pace and ends in the huge chase. The antics and physical jokes make this a classic short. My youngest son laughed hardest at the bomb scene. My favorite part is when Buster runs into a street, turns and pauses to stare at the pursuing policemen. As a car passes by, he reaches out, grabs onto the moving car and it literally lifts him off his feet and carries him away. I am amazed his arm was not pulled out of it's socket.

Buster co wrote and co directed this movie with Edie Cline. At less than a twenty minutes running time this film holds many memorable scenes. From the chase, to the car grab, to the scene of all of those policemen packing through the doorway, to it's laugh out loud ending. Cops is one entirely memorable, and unfortunately short, film. 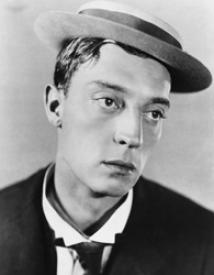 Eric's right this is a classic silent two-reeler. Buster was physically amazing and so imaginative. I love his stoic personality. He gets excited but never loses his Great Stone Face. I like when he "buys" the furniture of a family in the process of moving, from a thief who fools him into thinking the belongings are his. Then the hilarious ride across town. All leading to the famous climax. The number of cops involved keeps growing exponentially as the movie progresses until the ending where Keaton lures them all into the police station then emerges and locks the door. Silent slapstick didn't get much better. 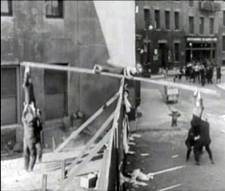 I don't know that I would call this one a classic. I smiled a few times during it, maybe chuckled once or twice, but never laughed out loud.

Of the big three comedians of the era; Chaplin, Keaton and Lloyd, Keaton is probably my least favorite. Sure, he pulls off some amazing stunts, but he doesn't have the pathos of Chaplin and I never really empathize with him like I do with Lloyd. To me he's kind of a glorified stunt man with good comic timing. I think part of it is his famous expressionless face. It makes it harder to connect emotionally to his character.

Yeah, when he grabs the car is pretty cool and I like the teeter-totter on the ladder with the cops on either end of it, but those are the only two real wow moments.

They tried to give the plot a bit of motivation with the girlfriend at the beginning and by having her appear again at the end, but really it's just a series of events that happen to Keaton. She doesn't really enter into the story at all except to get it started and to give it an ending.

I also have to say that while I'm not a big animal person, the way the horse behaves in the movie actually made me a little uncomfortable. He's pulling on the reins and flinching in some scenes. I don't know what they did to make him behave the way he does a couple of times, but I'm guessing it wasn't by giving him a carrot and some quiet encouragement.

With all the action, it does fly by pretty quickly, which to me is a good thing. I wouldn't want any more of it.