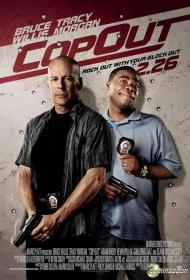 He wore the costume for a stakeout, but then he keeps wearing it because....?

The buddy cop movie has been done to death. They were best exemplified by the Lethal Weapon movies. In fact, I thought they went out with the 1990s. Apparently the makers of Cop Out thought there was still water left in that well. If this movie is any indicator, then that well is bone dry.

Willis and Morgan are two New York cops who have been partners for 9 years. The movie opens with a groan inducing scene of Morgan trying to interrogate a suspect by acting out different movie scenes, as Willis stands behind the one way window announcing each movie as Morgan copies them. Later in the movie, Willis and Morgan are about to shoot a bad guy by counting to three. They then argue if they shoot on three or count three and then shoot. Murtaugh and Riggs had that same argument at least twice in the Lethal Weapon movies.

The whole film seems completely worn out. Just as in The Transporter, they find a hot chick in the trunk of a car, who has been smuggled into the country by the bad guys. Willis makes out dated pop culture references. Even the soundtrack features old Beastie Boys songs.

Willis's daughter is about to get married. His ex-wife is now married to a rich man who is willing to pay for the wedding. With his fatherly pride threatened, Willis decides to sell his rare baseball card to fund the over priced nuptials, but it gets stolen instead, and traded to a drug dealer. Willis and Morgan, with the help of Scott, an inept thief who stole the card in the first place, attempt to get the card back.

Scott is the funniest person in the movie, but even he gets annoying very quickly. His best scene is when he is in jail and he bothers the guy in the next cell by asking if they can be prison BFFs, only without the rape. The last scene Scott is in, is the oddest of the movie. I don't want to spoil it for anyone, but it is played for laughs but is still anything but funny.

The reason the Lethal Weapon, and other good buddy cop movies, work is that one guy is the crazy one, while the other guy is the straight man. His reactions to the funny one is what sells the jokes. In Cop Out, everyone except the bad guys, are trying to be the comic relief. The trailer for this movie explains it well. Scott and Morgan are bickering back and forth in the car, then Willis comes in with the punch line. Instead, Willis should have acted as the straight man and his annoyance with them would have made the joke funnier. As it is, the only one annoyed is the audience. 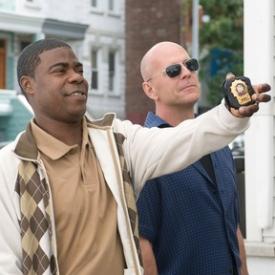 Tracy Morgan and Bruce Willis cop out of their careers in Cop Out.

With the right script and cast I think there probably is still some life left in the buddy cop genre.  This is definitely not that script or cast.  You'd think any movie starring Bruce Willis and directed by Kevin Smith would have to be at least mildly entertaining, but you'd be wrong.  In fact, this movie is so bad that it has my vote for worst movie of the year and I doubt anything released for the rest of the year will topple it from that spot.

I agree with you Eric about Seann William Scott.  He's mildly entertaining and his ending isn't funny at all, it's just bizzare.  It's as if they couldn't think how to resolve his character so they took the easiest and least funny way out.

In the Lethal Weapon movies, even though Riggs (Gibson) was the crazy comic relief, he was still dangerously believable.  And he had a motive for his insanity.  In this movie Tracy Morgan is playing more of the comic relief than Willis, but he's not very funny and he doesn't provide much relief.  He's also not very believable.

A buddy cop movie is like a romantic comedy.  The entire premise hinges on the chemistry of the two leads and Willis and Morgan just don't have that chemistry.  Eric, you say that Willis should have played the straight man, but no way would Willis in serious, tough guy mode ever put up with Morgan as a partner.

To add depth to the story the script throws in a suspected infidelity for Morgan and a daughter's wedding for Willis.  The movie is so bad though that all those events do is add to the running time and not the entertainment value.

The opening scene isn't the only moment that's groan inducing. What passes for humor throughout the entire film is groan inducing. Often it seems as if the actors are just ad-libbing their lines and not very well.

Everyone involved with this movie should be embarrassed and ashamed.

Seann William Scott steals every scene from the two leads.

This movie is horrible. Apparently the title was originally going to be “A Couple of Dicks” but the studio got nervous and wanted to change the last word to “Cops”. Upon hearing this Kevin Smith purportedly said, “What a cop out.” And so the title was born. Thus is the role of inspiration in art (not really).

Here’s another bit of useless trivia. I’ll bet you didn’t know this script was originally being developed as a vehicle for Robin Williams and James Gandolfini!

I laughed exactly twice during the entire movie. Once in the scene Eric mentioned where Seann William Scott’s character goes to jail. He gets the guy in the next cell to open up and share his hidden passion. “I could knit the fuck outta a big nice sweater!”

The other time was in the breaking-into-the-house-scene. The gun-toting, tough talking mom whose house it is cracked me up. She is the funniest person in this entire pitiful movie and (along with the ten-year-old car thief (ok I chuckled at him too) “Fuck you too, Professor X looking motherfucker!”) is the only character that we haven’t seen a million times before.

You know your movie is in trouble when the funniest characters are in supporting or cameo roles.

The worst part about the opening scene where Morgan is spouting movie lines while Willis names them is when Morgan says, “Yippie-ki-yay, motherfucker!” quoting Willis in Die Hard. Willis then (sadly) responds, “I've never seen that movie before.” I wish I’d never seen this movie.