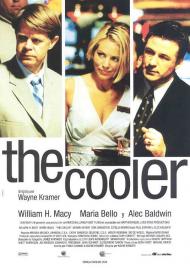 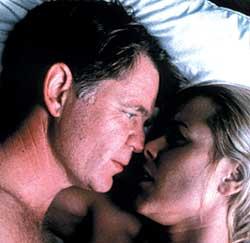 William H. Macy and Maria Bello in The Cooler.

The Cooler is a small, but well acted film about luck and love in Las Vegas. Despite the feeling of having been there and done that with other movies, such as Leaving Las Vegas, The Cooler manage to add its own brand of quirkiness, originality, and style to the Las Vegas/gambling as a metaphor for life idea. Where the movie fails, is in its somewhat unbelievable love story.

William H. Macy stars as Bernie Lootz, a cooler employed by Casino manager Shelly Kaplow (Alec Baldwin). A cooler is the Vegas term for someone so unlucky that they can "cool" a table just by being at it, thus ending a gambler's potential hot streak before it begins. Bernie is very good at his job.

He's so good, that Shelly, under pressure from new and younger management to keep the money rolling in, will do anything to keep Bernie working for the casino, including hiring Natalie (Bello) to pretend to fall in love with Bernie to encourage him to keep working there. As luck would have it, and in this movie it always comes down to luck, when Bernie actually falls in love with Natalie, his luck changes from cool to hot.

The movie features some slightly graphic sex scenes between Macy (one of the least physically attractive actors working today) and Bello. Now I'm sure that someone will say that these scenes are artistically necessary for the plot, but personally, I don't think it is ever necessary for me to see a completely naked Macy with only a woman's hand cupping his genitalia.

Without a doubt, the brightest spot to this movie is Alec Baldwin as the monstrous casino manager Shelly. He is a cruel and vicious bastard, and yet instead of being your standard movie villain, he is a fully realized three-dimensional character. It just so happens that one of those dimensions is gleefully sadistic. The other sides of him show a lonely man who longs for the old days of Las Vegas before it became a family destination. It's an award worthy performance, made even more surprising after Baldwin's recent and wasted appearance in the abysmal Cat in the Hat.

As I said, one of the weak points here is the unbelievable love story. At some point, Natalie falls in love with Bernie. Just why or how isn't really explained, a problem that exists in a great many Hollywood love stories where the writer(s) either can't think of a reason or can't be bothered to come up with one, and the audience is forced to once again 'accept' that it has happened.

Still, all in all, The Cooler entertains, and proves at least two things. William H. Macy should keep his pants on, and Alec Baldwin can still act. 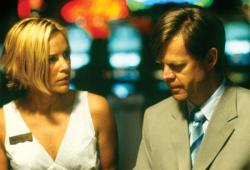 Maria Bello and William H. Macy in The Cooler.

I'll second those last two points. William H. Macy should never be allowed to disrobe in front of a camera again and Alec Baldwin can still act his butt off.

Scott is dead wrong, however, about the writers not giving Natalie a reason for falling in love with Bernie. They give her a reason and she speaks it to Bernie. She tells him that he is the first man she has known who doesn't want her just for sex and doesn't try to impress her by pretending to be something more than he is. As a prostitute in Vegas Natalie would be used to dealing with “the fuzzy end of the lollipop" to quote Sugar Kane, therefore Bernie's sincerity is probably not something she experienced everyday.

My problem is with Macy's performance. Sure he is a talented actor but he plays the part too small. Physically he is the perfect embodiment of the character but the whole 'luck-changing' aspect of the movie gives it a whimsical almost Capraesque feel that begs for a hammier reading. Alec Baldwin understands this and walks away with the movie.

The ending sequence is also poorly executed. It is supposed to be a lighthearted 'lucky' way out of a dangerous situation. Unfortunately the pacing of it is completely off. Instead of funny it comes across as stupid, mostly due to Macy's underplayed reaction.

The Cooler takes the archetype of lady-luck and turns it into a sweetly clever love story. Not a bad idea, but one that should be painted in broader strokes and with more star power. Cast Johnny Depp (in character make-up of course) as Bernie and Sharon Stone as Natalie and you have a hit movie. 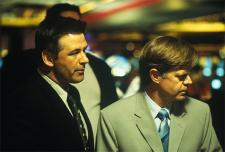 Alec Baldwin and William H. Macy in The Cooler.

The Cooler is a deadly serious film about changing times and an old friendship. Shelly is old school Vegas and does not like the new look of the strip. His metaphor of comparing it to an abused hooker is spot on. He and Bernie have been friends for years, but now their relationship is one of control and need.

To enjoy this movie you have to accept that Bernie has this amazing ability. Once you do that the rest of the film makes sense. Scott thought that the love story was unbelievable, but accepted that a guy could simply stand near someone and change their destiny?

I easily accepted Bernie's relationship with Natalie, but was more fascinated by his friendship with Shelly. They were once friends. They have a history together. They were partners. Now Bernie lives in a dive motel, working for Shelly, who now runs a large hotel/casino. My favorite scene is when Shelly, after being such a huge bastard, finally lets Bernie win.

As we learn through the movie, Bernie is only a cooler because he is miserable. Once he falls in love, he heats up and has the opposite affect on everyone. Is that how Shelly became successful? When they were friends, was Bernie happy? Maybe his good luck rubbed off on Shelly. By the end of the movie, when Bernie has left, it sure seems that Shelly's luck has run out.

Patrick wanted it made with broader strokes, but I think that would have created a sense of levity that the film was trying to avoid. Baldwin and Macy are walking a straight line here. They play everything serious, even though there is a fantasy angle to the plot. If they made light of it, or over played it, it probably would have fallen apart. As it is, The Cooler is a nice dramatic Las Vegas fable.