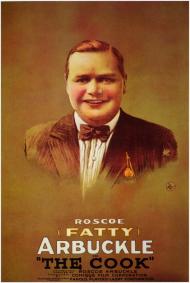 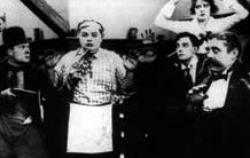 In 1917 Vaudeville performer Buster Keaton hooked up with writer, director and actor Roscoe "Fatty" Arbuckle. For three years they made a dozen short films together. Keaton would eventually go his own way and become his own writer and director as well as comedian. Arbuckle would go on to face accusations of rape and murder. His career could have gone the route of Keaton or Chaplin, but the negative image his legal woes gave him would destroy the public's desire to watch his movies.

The Cook, made in 1918 demonstrates Arbuckle's talent as director, writer and star. He is a short order cook to Keaton's waiter. They do well rehearsed slapstick in the kitchen and smile inducing dance routines in the dining room. Keaton, 23 years old at the time, could have probably been a great break dancer if it had been around then.

The plot involves Keaton battling some bone head for the affections of the restaurant cashier. The movie moves out of the restaurant and into an amusement park. At the park there is plenty of slapstick and the silent movie staple, a chase scene. This one has a bull dog chasing Keaton's rival. The dog even chases this guy up the tracks of a roller coaster.

The plot is extremely simplistic. The entertainment value is quaint. I give it 1 star for that. But as for Hollywood history, this movie is 4 stars. Watching these two comedic pioneers at the dawn of movie making is an education in film history. Even outside of the Hollywood arena this is a vital film that shows what the world looked like nearly a hundred years ago. 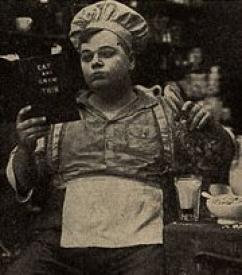 While I agree with Eric that The Cook is historically important I think he is dead wrong when he says the entertainment value is only worth one star. As I've said before, to truly appreciate art you must be able to step outside of the era in which you are living and view it from a distance. In that sense The Cook is a laugh-out-loud comedy that breaks new ground in moviemaking.

The scene where Arbuckle and Keaton do their 'Salome' dance is subversively funny. Notice the way Arbuckle strategically dangles kitchen utensils from different areas on his anatomy in what can only be considered an early drag scene. Keaton is as amazingly limber as Eric suggests, and I've no doubt he would have made a fine break-dancer. Arbuckle was no slouch at the physical bits either; check out his breakfast antics at the stove.

These guys are geniuses.

Even the dog is talented. He daringly follows the tough guy up ladders. Sure, the scene where they eat spaghetti seems quaint now, but not when you consider that until our troops brought spaghetti back from Europe in the First World War, it was still a new and exotic dish to the majority of Americans. In context, Keaton cutting the dangling pasta with scissors and Arbuckle 'knitting' with his, is extremely novel and, therefore, funny.

The writing is inventive as well. When the dog chases the tough guy out of the restaurant and down the street the scene cuts to a subtitle that reads 'The next day'. The very next shot shows the tough guy still being chased by the dog, suggesting that he has been running all night. An original bit that has been done probably hundreds of times by other filmmakers.

Believed lost until the original nitrate was discovered in 1998 The Cook runs only 22 minutes but could easily have been fleshed out into a feature length movie given the prodigious talents of its stars. 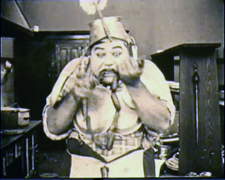 Fatty is bitten by an

Patrick, while I agree with you that this movie is funnier than Eric lets on, I would hardly suggest lengthening it. In fact, it actually runs too long as it is now and that's pretty sad for a 20 minute movie. The bit at the end when they leave the restaurant could have been trimmed altogether.

All of the funny parts take place in the restaurant. I like the dance as well, especially Fatty's Cleopatra impersonation only with a string of sausages instead of an asp. And that is one talented and unrelenting ladder-climbing dog! Arbuckle and Keaton also have some funny bits where they toss food back and forth between them.

I complete understand what you mean Eric about the historical value of movies like this and others of the era. Being able to film history has changed it. Future generations don't have to imagine what the world looked like back in the early twentieth century, they can see it for themselves. It's pretty amazing when you think about it.