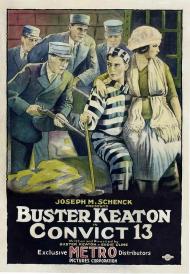 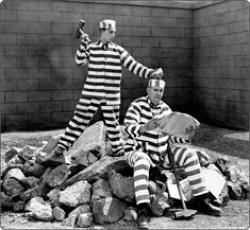 Convict 13 is a short film that gives Buster Keaton a chance to race about and demonstrate his physical comedy. It is all quite simple and nothing too imaginative shows up. Still, it is Buster Keaton and worth a viewing for any of his fans.

It opens with Keaton playing golf and getting shown up by the daughter of a warden from the near by prison. He knocks himself out by a ball ricocheting back at his head. An escaped prisoner finds him lying unconscious and changes clothes with him. The police come along and assume he is the escaped convict 13 and take him to prison. Actually he accidentally runs back into the prison after being chased by a group of policemen.

Once in jail he has to crush rocks with a sledgehammer. He does it sitting down, much to the dismay of a guard. He also finds out that he is, as convict 13, sentenced to be hanged. He eventually switches clothes to a guard's uniform but that only leads to being attacked by a particularly large inmate. A comical fight and escape ensues.

The movie ends with Keaton being woken up by the warden's daughter. It was all a nightmare. Of course that seems like a very tired plot twist today, but this film was made nearly 90 years ago. It sure wasn't old then. Also of note is that Keaton's father has a small role. He often gave his parents small roles in his movies. 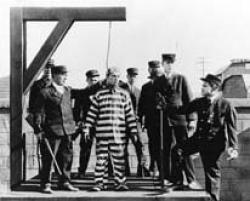 I agree that Convict 13 is not one of Keaton’s best or most imaginative shorts. It is however one of his most violent. In fact it is one of the most brutally violent silent comedies I’ve ever seen, culminating in a full scale prison riot where inmates and guards alike are shot and killed; albeit comically.

The over-sized Joe Roberts steals the movie as the insane prisoner that tries to kidnap the warden’s daughter. The way he struts around in the scene where he has just knocked out many prison guards (by savagely hitting them over the head with a sledgehammer as they come through the door into the prison yard) and comes upon Keaton now dressed as a guard, is priceless. Of course the resilient Keaton manages to come out on top even before he gets awakened from his daytime nightmare by the warden’s daughter back on the golf course.

The fact that it was all a dream makes sense because the plot is too preposterous even for a silent comedy short. Convict 13 proves that even someone as talented as Buster Keaton was could still make a bad movie. To use a golf metaphor this one is definitely sub-par. 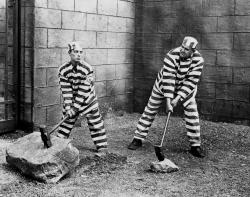 What a macabre and twisted little movie. I was actually relieved when Keaton woke at the end of the film, because frankly I couldn't believe what I was seeing before that. At one point, the convicts are gathered around a guard on the ground, hitting him with hammers. Granted, it's all handled in a very cartoonish manner, but I'm not sure I've ever seen so many deaths in a comedy of any era before. I mean, how many comedies feature a man being hanged, even if it is with a rubber rope.

You sometimes hear about women who fall in love with men on death row and apparently it's not a new phenomenon because here (albeit in the dream), the warden's daughter falls for Keaton, whom she believes is about to be hanged. As far as she knows, he's guilty, but that doesn't stop her from flirting with him and attempting to help him escape. It's just another reason why I'm glad this was a dream.

Recently I watched and reviewed Keaton's first solo film effort, One Week, in which I complimented Keaton for creating a sympathetic character. None of that is evident here where his character has no real personality traits whatsoever.  This is strictly a flat, 2-dimensional cartoon of a little short and like both of you, I was disappointed with it.