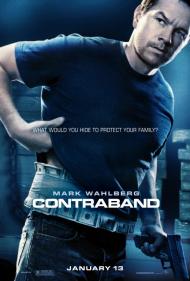 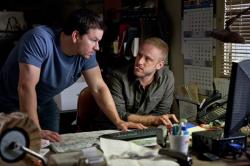 When Marky Mark, with his pecs and abs, first started making movies back in the 90s I wasn't his biggest fan. After nearly 20 years in the biz though and Mark Wahlberg has won me around. He possesses a naturalness in front of the camera that's appealing and he's developed real acting talent. So even while he doesn't stretch himself in this film, he still holds its familiar plot together. It's also impressive that after all this time and success he's still managed to hold onto his blue collar cred.

Wahlberg plays Chris, a former smuggler who has gone legit, becoming a husband and a father with his own business installing security systems in New Orleans. When Chris's brother-in-law runs afoul of Tim Briggs, a  smalltime gangster played with psychopathic quirkiness by Giovanni Ribisi, Chris is forced into doing another smuggling job in order to pay off his brother-in-law's debt.

It is this idea of the former crook having to do one last job that is the movie's biggest cliche. That has to be the most overused plot in crime movies. Al Pacino even provided the concept's tagline in The Godfather III when he so memorably said, "Every time I think I'm out, they pull me back in."

The pace of the film is pretty brisk, despite its nearly two hour running time. The action scenes are plentiful and there are several moments of edge of your seat tension. Chris's time in Panama, where he goes to pick up a large shipment of counterfeit money, features some of the best action as he's forced to partake in an armored car heist in exchange for the bills. There's then a race to get the load back to the ship before it sails.

Along with Wahlberg there are several standouts in the supporting cast. Ribisi is great as the violent gangster. He's not physically imposing, but he's so charged that you're never sure what he's going to do next. Ben Foster, who reminds me of a lesser Ryan Gosling, also does a good job as the best friend with a secret. J.K. Simmons provides some comic relief as the Captain of the ship where Chris is doing the smuggling. A blonde Kate Beckinsale (Why'd ya do it Kate? As a brunette you are hawt, but as a blonde, not nearly as much) however, is under-used as the wife who is just there to be put in jeopardy.

Ironically, Wahlberg's success as an actor has lead to complaints in some reviews that this part is a step backwards for him. And sure, this isn't a part that's going to win him awards, but it seems silly to criticize him for making an action film. There's not a lot to think about while watching it and we've seen some of this plot before in other films, but for a movie opening in January, it's actually pretty damn good.

Because Mark Wahlberg acted in a film in which others involved received award attention, Wahlberg is now at a lofty height in film making?  Bullshit.  The Bostonian Wahlberg is to Ben Affleck and Matt Damon what Jean Claude Van Dam is to Sylvester Stallone and Arnold Schwarzenegger.  He was good in The Fighter, but how can anyone put him on a pedestal for it when the supporting cast stole the film from him?   Just as Van Dam had Dolph Lundgren, Wahlberg can act circles around John Cena, whose 12 Rounds was likewise filmed in New Orleans.

Contraband is also similar in plot to 12 Rounds.  Both feature a tough guy forced into dangerous situations at the behest of a baddie.  Both must jump through hoops to protect a hot blonde they love.  Worse of all is that both plots are packed with wild coincidences, that if taken away each film would have fallen apart.  Although they are similar, Contraband is actually a remake of the 2008 Iceland made Reykjavik-Rotterdam, of which Baltasar Kormakur was the producer.

Chris just happens to be made "ship's boy," which allows him to clean the bridge where the charts and maps are he needs to look at without seeming out of place.  The carpet cleaner he uses also just happens to belong to a particular someone, which makes things likewise very convenient.  When Chris loses sight of the money, an alternate option is immediately made available.  Even though such a robbery had to be in the planning stages for a long time, they suddenly change plans to accommodate Chris.

Most action movies have coincidences that allow the lead to succeed, so I can let most of these go.  My biggest problem with Contraband is that a particular bad guy does not get his proper comeuppance.   Sure Chris beats him up pretty good, but after all the shit he pulled, it should have ended with Chris killing him.  Without that scene, the movie lost the, "FUCK YEAH!" moment it needed.   It implies something.bad happens to him, but it should have been Chris who dealt the final blow.

It is not as if it would have damaged Chris's character at all.  He was and is a criminal.  In one of the first scenes he brags of his smuggling success.  In fact, having him kill the bad guy would have better cleansed his soul.  As it is, Chris comes across as a lesser person, and the audience never gets the moment it sat nearly two hours for.  Just imagine how weaker Taken would have been if Liam Neeson just beat the kidnappers up and never killed any of them.