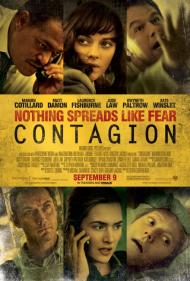 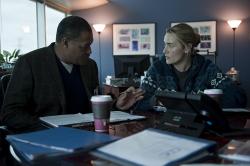 Contagion reminded me, in some ways, of a 1970s disaster movie with its large cast and doomsday plot. Only instead of being set on a plane or an ocean liner or a skyscraper, this disaster is set across the entire world. It is also much more frightening and real than those old films.

The plot tells the story of a new virus that is spawned in Hong Kong and picked up by Beth Emhof, an American business traveler from Minneapolis, who brings the bug back with her. From her plane flight, including a stopover in Chicago, the bug starts to spread in the United States. It also spreads in other parts of the world as people she interacted with in Hong Kong return to their homes and travel to other countries.

We are shown the effects, the reactions and the efforts to stop the disease from many different points of view. Laurence Fishburne plays Dr. Cheever, a Doctor at the Center for Disease Control spearheading the search for a vaccination against the new bug. Marion Cotillard is Dr. Orantes at the World Health Organization and is given the task of returning to Hong Kong to discover the source of the bug. Jude Law plays a radical blogger who writes about the disease along with conspiracy theories about the government and pharmaceutical companies. Kate Winslet is Dr. Mears, a CDC doctor sent into the field when the disease first breaks out to try and handle the outbreak in Minneapolis. Matt Damon is Thomas Emhof, the husband of Beth, representing an ordinary citizen. Along with the main characters, there are a host of smaller parts who also contribute to the overall story, such as Dr. Sussman, played by Elliott Gould, who makes an important medical discovery.

Like any big cast, multi story film, some storylines work better than others. One of the most effective is Kate Winslet's Dr. Mears. While many of the other characters deal with the disease safely from labs, Mears is in the field talking and working with the victims and her fate is the most affecting. Laurence Fishburne is also quite good. He's one of those actors who with his size, presence and that voice of his, just exudes authority. He's very believable as the man in charge who makes one human mistake.

The worst storyline is that of the Emhof family. It starts fine and dramatically, but as the film continues it never quite rings true. Damon seems off his game and the writing becomes melodramatic and the ending for he and his daughter is the most Hollywood moment in the entire film.

What really makes this story so scary is that something like this could happen and the moments when the movie feels like a documentary are the scariest of all. The best lines in the script are this exchange between a Dept. of Homeland Security official and Dr. Cheever. "Could someone be weaponizing the bird flu?"  "Someone doesn't have to weaponize the bird flu. The birds are already doing that."

The word "gripping" gets thrown around a lot in movie reviews and critic sound bites, but it's appropriate here. I was caught up in this movie from start to finish. Director Soderbergh weaves the many storylines together in a cohesive manner, creating a global disaster film that would make Irwin Allen proud.

Since the passing of the great Robert Altman, Steven Soderbergh has most successfully carried the banner of intertwining, multi-character storylines. Contagion manages that difficult feat with ease. I get Scott’s comparison to those 1970’s disaster movies in the sense that you begin to wonder just who will remain alive by the end credits. It also reminded me of HBO’s 1993 movie about the early years of the AIDS epidemic And the Band Played On.

On a rather snide note this is my favorite performance by Gwyneth Paltrow as she dies a horrible death and is shown getting the top of her skull sliced open and her brain studied. The script makes a point of showing her in an unsympathetic light. She is not only patient zero but also an adulteress. The movie begins on day two of the outbreak and goes through the next 140 days or so before finally showing us the events of day one.

The script is decent. Elliott Gould gets the movie's best line when he tells Jude Law, “Blogging is not writing. It's just graffiti with punctuation.” Not that I necessarily agree with that statement but it is a memorable bit of dialogue.

Contagion will definitely make you think about the nature of infectious diseases. It tries to do for the sneeze what Jaws did for swimming in the ocean. Like Scott I agree that it is a very believable and scary possibility even if the ending is a bit too pat and Hollywood happy.

For anyone that finds her as annoyingly vapid as I do, Contagion is worth the price of admission for Gwynie’s death scene alone. 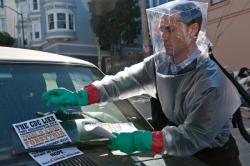 The best Contagion can do is distract you with it's all star cast, as it truly has very little to say.  A disease spreads.  People die.  A cure is found.  The end.

H1N1 is referred to several times in the film.  It is in those moments that the film could have become interesting.  The line Scott mentioned, "Someone doesn't have to weaponize the bird flu. The birds are already doing that." Killed the film.  Do any quick search on line and you will find all kinds of articles where someone suggests that H1N1 was a man made disease.  Contagion would have been far more interesting had the disease in the film been purposely created by man.

An H1N1 vaccine was quickly put together and forced onto the American population by every main stream news outlet.  As Contagion points out, there are millions, if not billions, of dollars to be made by pharmaceutical companies when this kind of thing happens.   However, it is the blogger who is treated as a bad guy, for being paid to promote a particular vaccine.

Patrick mentioned the line, “Blogging is not writing. It's just graffiti with punctuation.”  In reference to the Jude Law character, who is the least convincing.   There are all kinds of conspiracy bloggers on-line but none of them have the influence that Law's character is shown having in the film.  I am currently listening to a you tube rant by noted conspiracy theorist Alex Jones.  He is going on about H1N1 clearly being a man made engineered virus.  After two years on-line, the video does not even have 2,000 hits.

Contagion could have been an exciting political thriller, with backdoor deals and huge money exchanges.  It could have shown corrupt politicians and greedy manufacturing companies willing to endanger people for profits.  It could have unfolded with one secret being revealed after another.  Instead we have a two minute plot spread out to nearly two hours. The only thing to keep you watching is wondering which star will die next.