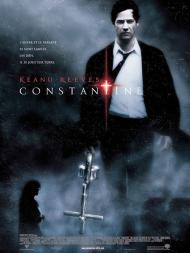 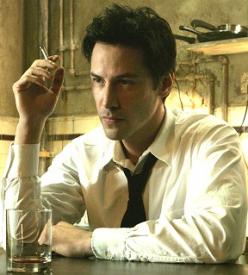 I predict that Constantine will not have the same wide appeal as the Matrix, Keanu Reeves' last big-budget special effects movie, but to a certain fan base (those who miss Buffy: the Vampire Slayer and Angel for instance) this movie will be enormously popular. Fortunately for me, I count myself as a part of that group.

Reeves plays John Constantine, an exorcist/demon-hunter. From an early age he has been able to see the demons and angels who walk amongst mankind. These visions eventually caused him to attempt suicide. He was resuscitated after two minutes, but since he was technically dead by suicide, a mortal sin in the Catholic Church, his soul is destined for hell. In a bid to change his fate, he now spends his days and nights battling Hell's minions in an effort to “buy" his way into heaven; a task that is lent urgency by the news that he is suffering from terminal lung cancer.

While I've always been a bit of a fan of Keanu's, I'll be the first to admit that it's pretty unlikely that he'll ever win any acting awards. He always seems to be in either one of two modes, full-on surfer dude ala Bill and Ted's Excellent adventure, or stiff and serious as in Speed or The Matrix films. Constantine definitely falls on the stiff and serious side, but as the movie is mostly action and Reeves is the brooding hero, he handles the part well enough.

The plot of the films kicks into gear when a woman jumps to her death from the roof of a hospital. Angela (Weisz), the woman's sister, is a police detective who is convinced that despite all evidence to the contrary, her sister would never commit suicide. Suspecting foul play of the more than normal kind, she is led to Constantine's door to ask for help. After some initial reluctance, he agrees to help her; only to discover that what is truly happening is much bigger than either one of them.

If there's a trick to making movies of this nature, it's this. The filmmakers have to take the subject matter seriously. If it's obvious to the audience that the movie was made with a wink and nudge, then it will never work and the movie becomes campy. There's no such problem like that here. The script is well written, with just the right amount of humor injected into the horror and action. Exposition is also kept to a minimum so that you never feel like you're being told what's happening. You just have to pick up the rules of this movie world and its characters as it goes along, which keeps the plot moving. Perhaps the only moment that borders on campiness is the performance of Peter Stormare as Satan.

The look of the movie is post-modern noir, with all of the main characters dressed in black and white and the rain drenched streets of Los Angeles combined with modern special effects and computer generated demons.

I definitely believe that this movie is going to find a love it or hate it reaction from the audience. Either you enjoy this type of film or you don't. I loved it. 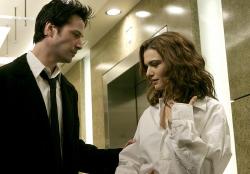 I loved it as well. The action and suspense is there in spades and it keeps you guessing what is behind the next corner. The whole time you know something sinister is building, you just are not sure how it will actually play out. The movie keeps you interested and you really need to pay attention to grasp all the "rules" as Scott mentioned.

Reeves is great in these kind of films. That is to say that he needs to do very little acting. The action and the special effects distract from how staged his smoking scenes look. He lights those cigarettes and puffs away on them in such of a rehearsed manner that it practically screams "Hey look at me I am doing a cool smoking scene."

Religion is often a subject in films. As usual, Hollywood gets it wrong. In it's attempt at promoting socialism, Hollywood has to make at least one of the good guys bad. In Constantine, the angel Gabriel changes alliances after countless years. This moving constantly mentions balance of power. It's kinda like, actress, Maggie Gyllenhaal being quoted in a May issue of People magazine as saying that the United States is at least partially to blame for 9/11. Hollywood has some inexplicable need to show that the good guys are sometimes no better than the bad. Okay Maggie, I don't care how arrogant the U.S.A. may come across to the rest of the world. We did not cause it to happen, in any way. Gabriel is an angel from The Bible. It is fully aware of God's power and right and wrong. To have it be the bad guy is offensive to Christians.

The dvd contains some good deleted scenes. One should have been included in the film as it shows what happened to John's loyal sidekick Chaz. Constantine is a great, fast paced film that may offend the religious but will still entertain if you can get past it. 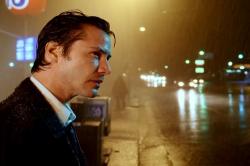 Eric, I'm always amazed at the lengths to which you will go to spout your political opinions in your movie reviews. Comparing this movie's use of the angel Gabriel to a Maggie Gyllenhaal quote about 9/11 might just be your biggest stretch yet. I also don't see how this movie can be considered offensive to Christians. Since the bible was written thousands of years ago it is not inconceivable that Gabriel could later switch sides, after all Lucifer started out as an angel. And angels, like humans, have a free will don't they?

That said I have to confess that I am not usually a fan of this genre. I never saw even one episode of Buffy for example. Still this movie reeled me in and kept my attention throughout. The special effects are good, I especially enjoyed the demon in the mirror trick.

Also two of my favorite underrated actors are in it. Tilda Swinton and Djimon Hounsou are both intelligent, charismatic performers who bring a certain cache to any project.

I agree with Scott that it is essential for movies of this type to take themselves seriously. Constantine does just that. The script is spare, but as Eric pointed out, you really have to pay attention. It also dabbles in philosophy like when Gabriel tells Constantine that there is a big difference between "knowing God exists and believing in God".

Any movie in a genre that I'm not a fan of that can entertain me is a winner in my book.