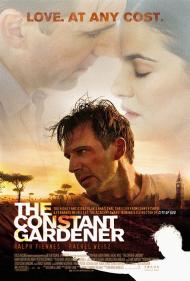 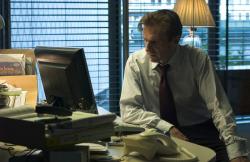 Ralph Fiennes in The Constant Gardener.

With The Constant Gardener, adaptations of John Le Carre's book continue the winning streak that they've been on since 1965's The Spy Who Came In from the Cold. Although, being adapted from a fairly long book, much is lost in the editing to keep it down to a bearable running time. Being familiar with the book, I was able to follow the complex storyline quite easily, but for those who aren't, keeping track of who's who and who's lying will be more of a problem.

What won't be a problem, is believing in the heart-felt performance given by Ralph Fiennes in the lead role of Justin Quayle, a British Diplomat stationed in Kenya. As the movie opens Justin learns of the murder of Tessa, his wife played by Rachel Weisz. The movie's real story is his journey from complacent observer to active participant in the world around him.

Tessa, as shown in flashbacks, was an activist in the cause of better care for Africans. She worked closely with a Dr. Bluhm, a local doctor whom those in Justin's circle believed was also her lover. Suspicion of her death soon falls on Bluhm as he was the last one seen with her, and he's now missing. Tessa though, had rocked more than one boat during her short time in Kenya and, as Justin soon discovers, there's more to her death than a simple love triangle.

Since the end of the Cold War, Le Carre has had to change his enemies. This time around the villains are large pharmaceutical companies who are using Africa as a cheap testing ground for new drugs. It's a cause and a villain that would almost sound like soapbox preaching if it wasn't so well done and so believable.

One problem I had with the movie was the constant use of hand held cameras. It lends a certain style to the movie, but I find a little jittery camera work goes a long way. It does add realism with its "You are there" feel, but it's better suited to the action scenes rather than those where two people are just standing there talking.

The casting of the movie is superb. Both Fiennes and Weisz embody their characters to the degree that if I ever reread the book, it will be impossible for me to not picture them. For some odd reason though, the writers kept Tessa's age the same as it was in the book, despite Weisz being 34, while Tessa is only 24. Since Weisz, while very beautiful, doesn't look 24, I wonder why they didn't either change her age or just not mention it.

I'm not sure if it's just luck or if Le Carre has had a hand in it himself, but every author should be as lucky as he has been with movie versions of their novels. 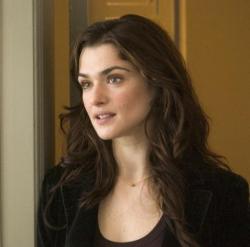 Rachel Weisz in The Constant Gardener.

What a depressing but very good movie.

As Scott said the story is rather complicated. It takes patience and close attention to detail to figure out how all the pieces and characters fit together. Being unfamiliar with the book certainly doesn't help but the story, as filmed, is so emotionally engrossing that it pulls you in.

Still just knowing that such absolutely ruthless and cruel people not only exist but often flourish in this world adds to the overall feeling of despair the film leaves you with. And though there is a small measure of justice at the end it doesn't completely wash away the oppressive feeling of despair generated by the story.

The acting is superb. Ralph Fiennes deserves an Oscar nomination for sure as does Rachel Weisz. In fact there isn't a bad performance in the movie. It might be the best all around acted movie of the year.

I repeat, what a depressing, but very good, movie. 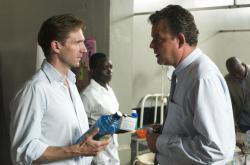 Ralph Fiennes and Danny Huston in The Constant Gardener.

The Constant Gardener does not attack capitalism. It attacks the pharmaceutical industry. With this movie and recent books like Kevin Trudeau's Natural Cures "They" Don't Want You To Know About, it seems the Pharmaceutical industry is being exposed like tobacco and oil industries have been.

Apparently it is just now dawning on us medicine users that drug makers are not charitable institutions. They make and sell medicine not for the good of mankind but for profit. Like unions and lobbyists, whenever any amount of money is involved motive must be questioned. The Constant Gardener is not a true story but in a world where so much money is being made on prescription and over the counter drugs, it could very well be. Consider this line from Trudeau's book, "We take more drugs than ever before, yet we are sicker than ever before."

The Constant Gardener shows quite well that large amounts of money corrupts. Whereas that can certainly be argued, the movie leans to the left too often to be unbiased and thus it loses a bit of it's point. The line where Tessa states the old liberal line about attacking Iraq for oil and a photo op at the White House is now cliched to the point of meaninglessness.

The best aspect of this film is the mystery. Is Tess really in love with Justin? Is she having an affair? What is she really up to? Showing rich white business men as corrupt is hardly original. The relationship between Tess and Justin is what gives this movie its friction. Even after Tess's death her character still looms over the entire film.