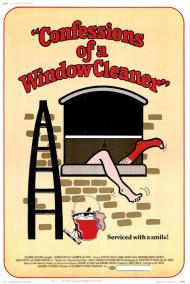 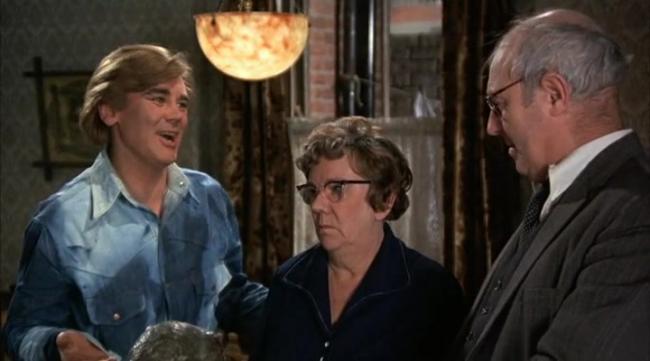 Confessions of a Window Cleaner.

Confessions of a Window Cleaner is a silly British sex comedy from the 1970s. Considered practically pornographic upon its release, it seems very tame by today's standards, although it does feature far more nudity than you will ever see in a comedy today. Somewhere around 1990 nudity seemed to disappear from comedies. Back in the 1980s you were practically guarenteed to see at leasts breasts, but today its as if someone decided that nudity and comedy don't go together, which is laughable because nipples make any movie better.

Robin Askwith, a Mick Jagger lookalike, plays Timmy Lea, a young and rather naïve young man who takes a job as a window cleaner with his more worldly brother-in-law, Sid. All of their clients appear to be young beautiful women who are just longing to take their clothes off and have sex. Timmy though isn't the most suave of men and invariably something goes wrong in the process, but we get to see lots breasts and bottoms (including many, many shots of Timmy's hairy white bum). We also get a reminder that waxing wasn't very popular in the 1970s and you know exactly which of the women Timmy sleeps with are natural blondes.

While the nudity is what this movie is most remembered for, it is Timmy's family that provide most of the real laughs. His larcenous father, his ditzy mother, his pregnant sister and Sid, who only in 1970s Britain could ever be considered the player he seems to be. The clash of classes that ensues near the end of the movie when Timmy's family mingles with the family of Timmy's bride-to-be is amusing. Timmy's bride is a police officer from a family of police officers while Timmy's family is from the other side of the law.

Crucified as pornographic trash by critics upon its release, it and its sequels are still scoffed at by the British press. They've been called "Films from the darkest days of British cinema". Despite that they've still managed to remain popular, mainly I suspect among teenage boys, which was the age I was when I first saw it on late night cable. Although I didn't enjoy it as much today as I did then, in part because I've seen breasts in person since then, there are still some funny and enjoyable parts.

This movie is also a bit of a time capsule. Obviously it's a fantasy and not a documentary, but it does show a bit of the fashions, hairstyles and the attitudes of 1970s Britain. It also shows how hedonistic the 1970s were prior to AIDS. Perhaps it's also the way we like to remember or fantasize about an era that was, in so many ways, more innocent than today, while at the same time being more relaxed (or was it simply more naive?) about sex.

This movie is tacky, tawdry, crass and sexist as hell. It is also a mindless bit of titillating fun. Despite being savaged by the British press upon its release it became the biggest box office hit of 1974 in England. Viewed today it remains humorous in an innocent but still risque manner.

I agree with Scott that the scenes with Timmy Lea's family are the best and funniest ones in the movie. They provide a brief respite from all the nudity and sexual shenanigans. At one point Timmy's brother-in-law says to his pregnant wife, “All I wanna do is make you happy.” “Then piss off.” She replies. She also mistakes a bit of gas for labor pains.

As a gay man I wasn't interested in all the tits and bush on display but I did enjoy the many shots of a naked Robin Askwith. Although you have to look closely to see the full-monty there is a fleeting glimpse that's visible during the sex on the kitchen floor scene, where Timmy loses his virginity in a pile of soap suds.

At the climax we are treated to a rousing rendition of the Hallelujah Chorus. Both Timmy and the woman are completely naked in this scene and there is definite genital contact taking place. It remains quite a graphic sex scene for a non-pornographic movie, even by today's standards (although as Scott pointed out, nudity in comedies isn't as common as it once was).

The many sexist lines include Tommy's quip upon feasting his eyes (spying) on a room full of naked (and presumably underage) schoolgirls. “What a knocker factory!” Another time he makes this offhand observation, “She was the type of girl you say 'Please may I?' before you give her one.”

And the scene that made me laugh the hardest is where one of his conquests (in a movie where nearly all the women act like nymphomaniacs Timmy has an easy time getting laid) informs Timmy that she requires a certain type of foreplay before having intercourse, or as she puts it, “No, no, you've got to say hello to her first.” To which Timmy literally greets her vagina with a cheery, “Hello!”

For a while I wasn't sure how things would play out between Timmy and his police woman girlfriend. They have a rather sweet romance in the midst of all the easy carnal pleasure Timmy is enjoying. A bawdy comedy that treats casual sex as a right of passage, Confessions of a Window Cleaner is harmlessly offensive fun. 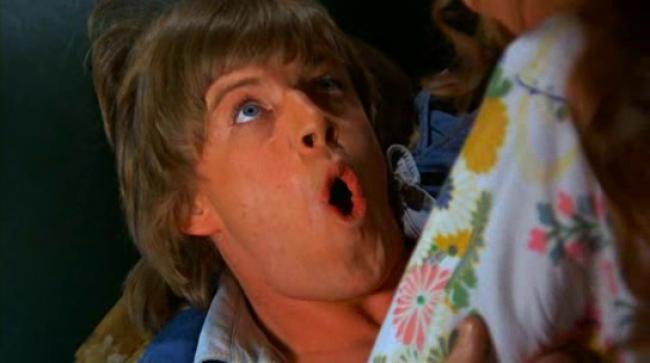 Robin Askwith as Timothy Lea, losing his virginity to a garter belt in Confessions of a Window Cleaner

The first part of Confessions of a Window Cleaner, which has the most sex, is also the better half. Things do not go completely right when the stripper tries to take Timmy’s virginity. She is on top of Timmy who is struggling to make proper penetration. He looks up at her apologetically and says, “I don’t know what’s come over me.” The stripper looks down and says, “Well it isn’t me.” Think about it.

Patrick mentioned the girl who tells the clueless Timmy to greet her vagina. She first gets turned on by talking to Timmy about classic Hollywood films and movie stars like Humphrey Bogart and Marilyn Monroe. Before they have sex, Timmy has to fix her flush. He explains to her, “I just had to adjust the ball cock.” It is intended as a dirty line but considering he is referring to her toilet, it lacks any real sexiness.

As Scott wrote, Confessions of a Window Cleaner is best remembered for all the female nudity. There are some laughs to be found and the best jokes are sexual, no matter how cheaply burlesque they are. Timmy gives a cute bird his window cleaning business card but she responds, “I live on a house boat.” Timmy just smiles back, “Fair enough I might even do your port hole for nothing.” Ba-dum!