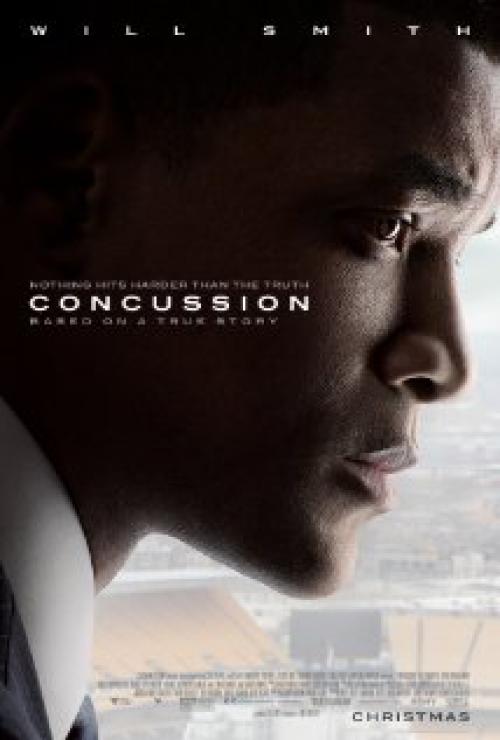 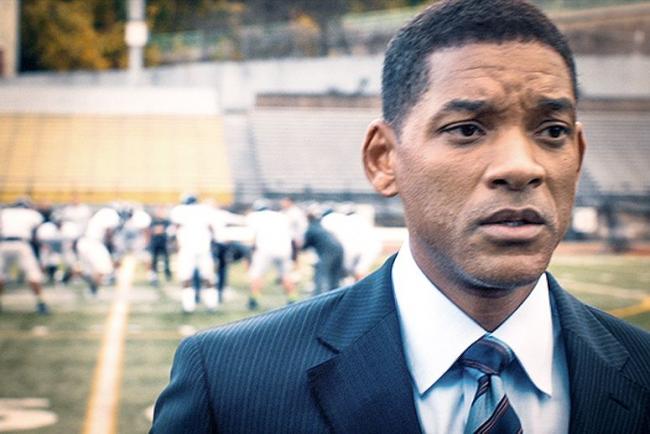 Will Smith in Concussion.

Concussion is the third movie of 2015 to be set in the previous decade and to tell a true story (or Hollywood's version of the truth anyway) where the little guy takes on a giant institution. We had reporters after the Catholic Church in Spotlight, a group of investors betting against Wall Street in The Big Short, and now Will Smith takes on the NFL as Dr. Bennet Omalu.

Originally from Nigeria, he's the man that performed the autopsy on former center Mike Webster in Pittsburgh back in 2002 and in the process discovered a disease caused by repeated head trauma. He named it chronic traumatic encephalopathy or CTE. As the list of former players exhibiting signs of the disease grows, Omalu, with the encouragement of his boss Cyril Wecht (Brooks) and former Steelers team doctor Julian Bailes (Baldwin), confronts the NFL with scientific evidence.

America loves football. It is practically a religion to some people. So of course this news didn't go down well with the people who run the sport. Especially since Omalu wasn't even a citizen of the United States. With the future of American football as we know it possibly on the line, the NFL did whatever it had to to keep Omalu's findings underwraps. Now it may be hard to sympathize with men getting paid millions of dollars to play a game they love but the price many of them paid in return for the privilege was an early, painful death.

Concussion keeps the focus on its protagonist. This is his personal story more than it is about how the NFL was forced into having a conscience. Omalu is a fascinating over-achiever. The opening scene establishes his brilliance by having Smith rattle off his credentials while testifying in court. He dreams of becoming an American citizen. He falls in love, gets married and is soon expecting a child. Then he comes up against the NFL and his life changes.

Will Smith is quite good in the lead role, even managing to sustain his accent throughout most of the film. He's come a long, long way since his Fresh Prince days. He and Gugu Mbatha-Raw have nice chemistry together. The relationship between Omalu and Prema Mutiso is probably Smith's most satisfying screen romance. Albert Brooks and Alec Baldwin both bring their considerable acting chops to the table, providing Smith plenty of support.

While I enjoyed Concussion it's not without its problems. The trailer showing Smith repeating the line, “Tell the truth.” while his eyes fill with tears is what's wrong with the movie. At times it's too damn melodramatic. The NFL is treated as a one-dimensional villain. We are meant to empathize with Omalu and pity the former players.

One thing Spotlight, The Big Short and Concussion all demonstrate is that Americans have good reason to be suspicious of our institutions these days. Of the three movies, Concussion, while still entertaining, is the least powerful.