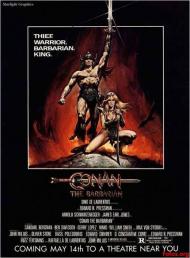 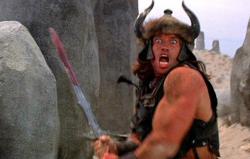 Arnold Schwarzenegger in Conan: the Barbarian.

Arnold Schwarzenegger's best asset as an entertainer is that he fully understood his limitations as well as his best assets. Early in his career, he scored big in two roles that played directly to his body builder's physique as well as his thick Austrian accent. In both The Terminator and Conan the Barbarian, Arnold has little dialogue and lots of action.

Conan the Barbarian is one of the best sword and sorcery films ever made. Like superhero movies, they are to often played for laughs and are not treated seriously (see the subsequent Conan sequel for an example). However, this first Conan installment is a near perfect action film.

Conan's village is pillaged and destroyed when he is a child. Young Conan is put into slavery where by he develops lots of muscles due to hard work. After becoming an adult, he gets released. He learns how to fight, use a sword and have sex. All as spectators watch.

While trying to rob a temple that worships snakes, Conan meets and befriends a thief and a female warrior named Valeria. Her motto is 'Do you want to live forever?' She says it as she jumps from the top of the temple to escape. Valeria quickly becomes his lover.

Conan, as well as the thief, the princess and a hack wizard, dig in for battle at an old decrepit fortress. Thulsa Doom's army is close behind and this will be the battle to decide everyone's fate. Shortly before the enemy attacks, Conan prays to his god Krom. He asks for success in the battle. In his prayer, Conan says that if he does not help him 'then to hell with you.' However, Krom does hear the warrior's prayer. At a harsh point in the battle when Conan's luck seems to just about have run out, Valeria appears. She is dressed in shining armor. She deflects an attack from an enemy soldier then turns to a shocked Conan and says, 'Do you want to live forever?' She then disappears as Conan defeats the rest of the army.

Action packed and definitely R-rated, even by today's standards. Blood, nudity and sex are prevalent. However, it is the action that is the true benefit here. These people seem to be swinging these swords like they really mean it. These are not your Errol Flynn sword fights.

Conan the Barbarian is fast paced, but at 129 minutes, it does take awhile for the thrust of the plot to get going. Still, all that action and a smattering of humor make this a great action flick and one of the best of its genre.

Eric, you aren't kidding when you say, "little dialogue". Conan's first spoken line doesn't take place until nearly 30 minutes into the movie. His total number of lines can't be more than 20 or 30. Valeria is the love of his life, but he speaks exactly 5 words to her in the entire movie when he says the immortal line, "You are not a guard" when they first meet. For the rest of the movie, they have sex and do battle together, but he never actually speaks to her again.

It's not only Schwarzenegger whose lines are limited. The dialogue is kept to a minimum in general. With its classical music type score and dramatic storyline, the story is nearly operatic in scope. The action, the music and the cinematography tell the story in way that keeps the need for dialogue kept to a minimum.

The story does run long. It's an origin story and a tale of revenge. We see him as a child and how he's raised and trained to become Conan the Barbarian before he even begins his quest. If they'd wanted to tighten it they could have cut most of his formative years. They could just as easily given us the details of his past via the voiceover narration, or had his father killed when he was older and set him on his journey to kill Thulsa Doom right from the start.

There's a very gritty feel to the film. Sandahl Bergman is beautiful but believable as the female warrior. She doesn't wear make-up or look as though she just had her hair done. Like you mentioned Eric, you feel each blow of the swords and the hammer wielded by one of the villains feels heavy enough to really kill someone. Only two things standout as phony looking and that is the wigs and the helmets, which in contrast to the weapons, appear to be lightweight and possibly made of plastic.

One of the things that makes this movie unique is the R-rating that you mentioned Eric. The blood, gore, nudity and sex mark this as sword and sorcery aimed at grown-ups where too often they're marketed at the whole family. This movie was a success, but the producers decided they could make even more money on the sequel if they edited it down to get a PG rating.

While not completely faithful to the original Robert E. Howard stories, the script does retain enough of their spirit to make the character recognizable. The origin story was written exclusively for the movie and the character of Thulsa Doom is from Kull the Conqueror, another Robert E. Howard character. The geography though is straight out of the stories and certain plot elements are also lifted from them, but as a pastiche rather than a direct translation. Valeria shares certain traits with the character of Belit from the story, "Queen of the Black Coast", as an example, although in the story she was a pirate and not a thief.

I agree with you Eric, despite a few rough edges, this is one of the best sword and sorcery films ever made. 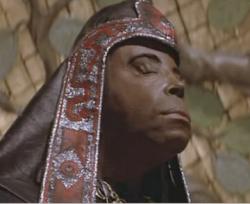 James Earl Jones as Thulsa Doom morphing into a snake in Conan the Barbarian.

I agree with my brothers on this one. Conan the Barbarian contains a heady combination of violence, sex and humor. Conan kills his enemies and beds his women with abandon. Schwarzenegger was perfectly cast for the role. As Eric wrote it highlights his strengths and downplays his weaknesses as an actor.

James Earl Jones is likewise great as the over-the-top villain Thulsa Doom. The scene where he casually beckons to a priestess to step off the edge of a cliff towards him, to her certain death, shows just how evil and all-powerful the man is. Sure it looks a bit cheesy when he morphs into a snake but the character has been so well established by this point in the movie that it works anyway.

I didn’t mind the pacing. This is meant to be an epic and it works as such. The exteriors were shot in the rocky wilds of Spain and the cinematography is quite impressive. There is a genuine feeling that this is a vast world that Conan traverses on his many adventures. And we the viewer accompany him along every step of the way. As Scott mentioned, the score by Basil Poledouris greatly enhances the action and perfectly suits the rugged setting.

The action scenes are tense, violent and well-staged. They are far more realistic than today’s CGI blue-screen battles. Perhaps someday computer animation will be indistinguishable from reality but I doubt it. I much prefer the pre-computer movie era.

The dialogue is sparse but well written and sets the perfect tone. Take this opening line from the narrator for example, “Between the time when the oceans drank Atlantis, and the rise of the sons of Aryas, there was an age undreamed of. And unto this, Conan, destined to wear the jeweled crown of Aquilonia upon a troubled brow. It is I, his chronicler, who alone can tell thee of his saga. Let me tell you of the days of high adventure!”

I will go my brothers one better, Conan the Barbarian is THE best (adult) sword and sorcery movie ever made! 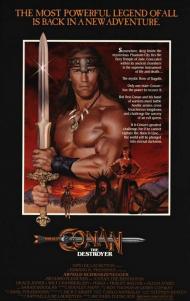 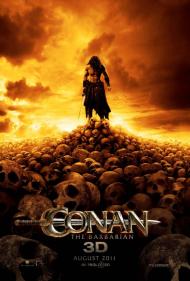