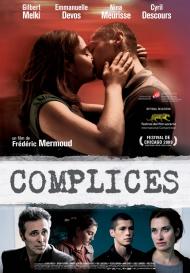 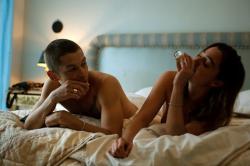 Male prostitution seems to be a common subject in French films. Cliente and Hors de Prix, both released in 2008, featured a younger man servicing older women.  Complices is about a young man, Vincent, who services older men.

Complices opens with the discovery of Vincent's battered, dead body in the Seine river.   Herve and Karine are two single, middle aged Paris police detectives.   They investigate the murder and discover Vincent's past.   Through flashbacks we see Vincent as a hustler, pimped out through the Internet.  His pimp makes arrangements for him to meet men and the pimp takes his cut.

Although he has sex with men, Vincent is straight.  At a cyber cafe the 19 year old meets and starts dating a girl still in high school, Rebecca.  At first he tells her he is in real estate, and she buys it.  Only later does he tell her the truth when he finds he is in love with her.  At first she is shocked but comes to accept it and even asks to join in.

Meanwhile, the detectives learn that Vincent was a hustler and Rebecca was his girlfriend.  The problem is that Rebecca is no where to be found.   Is she dead?  Is she the killer?  Was it someone else?

Rebecca and Vincent's life together is filled with sex with each other and customers.  By contrast, Herve and Karine cannot find love or sex.  Herve tells Karine how he once got a girl pregnant when he was young but has not seen her or his child since.  Karine tries meeting men on line with no luck.  They are not interested in each other.  Early in the movie they share a locker room in which Herve showers and dresses next to Karine.  He makes no sexual gestures and she is not interested to look.

Herve goes undercover as a customer for a male prostitute who has the same pimp that Vincent did.  The whore dances shirtless in front of Herve, bragging about how "all" of his muscles are hard.  Herve looks completely uncomfortable. Not only because he is with a man, but because he is merely alone with someone.

The story of the middle aged couple compared to the young couple is fascinating.  The older couple does not have the sexual ease of the younger couple, but they have a level of maturity and wisdom completely vacant in the younger.   Vincent can fake all kinds of gay sex with strange men, while Herve can barely stand being alone with one for a few minutes.

This story shows how some people can use others for financial gain or pleasure.  Although most of the film is dark and depressing, it ends on a very surprisingly decent note.  Sometimes people can be unselfish.