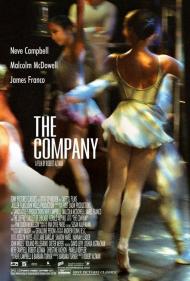 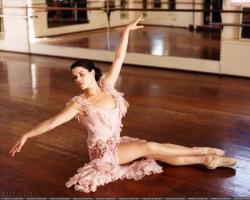 When an actress who trained as a ballet dancer before making it big in the movies, stars, co-writes, and co-produces in a movie about ballet, you have to wonder if it will just be a vanity piece for her. The Company, for which Neve Campbell did all of those things, is anything but a vanity piece. Directed by Robert Altman, and featuring the Joffrey Ballet Troupe of Chicago, it avoids all Hollywood clichés to emerge as a fascinating and entertaining look into the world of ballet.

Rather than a conventional plot, The Company merely allows us, fly-on-the-wall like, inside the world of the Joffrey Ballet Troupe. We follow the dancers over an unspecified length of time through, not high drama, but the ordinary events of their lives. We see the struggling apprentice dancers sharing a tiny apartment. We see the 43-year-old lead female ballet dancer as she proclaims, "I've been doing this dance with these counts for the past ten years and it's always been good enough before now and I don't plan on changing it." And we follow Neve's Ry, a dancer somewhere in the middle, no longer an apprentice but not yet a star. It is in the minutia of their daily lives that the movie dwells and it is fascinating. We follow them through their triumphs and tragedies as all of the characters, no matter how small the part, are shown as likably human and sympathetic.

Apart from Neve, the only two actors of note in the movie are James Franco as Ry's Chef boyfriend and Malcolm McDowell as the scene stealing Artistic Director of the Ballet Troupe. McDowell is picture perfect in the role, obnoxious and funny, often at the same time. He can not help but intrude into every aspect of the ballet, sitting in on a rehearsal in one scene with the statement of "I'm not here, just carry on." but is in minutes, giving advice.

The movie begins with a voice over announcement "To make sure all cell phones are turned off and that the use of flash photography is strictly forbidden", just as you would hear at a live theater performance. This is appropriate in that the ballet productions, of which there are several, have the feel of a live performance, so much so in fact that at one point I had to stop myself from actually applauding. This is mainly due to Altman's filming style. Unlike so many movies, where the lack of dance skills of the actors have to be covered up, this movie features real dancers, including Neve who got back into dancing shape for this role, and therefore quick cuts are almost completely non-existent. Instead, the camera lingers on the dancers, letting their movements carry the scene rather than the camera's movements. Several times, the camera simply pulls back until the stage fills the screen and it almost seems as if you are looking onstage rather than at a screen.

As the driving forces behind this movie, Campbell and Altman have pulled off a seeming impossibility. They've created a movie with a limited plot, no villain, and yet done it in such a way that you are sucked into it in a very real and compelling way. The end result is an unconventional yet highly entertaining movie that takes you inside a world you may be completely unfamiliar with, but are unlikely to forget. 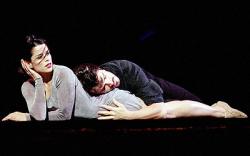 Scott is correct when he writes that this movie does not come across as a vanity project for Neve Campbell. She doesn't play a diva or try to convince us she is the most talented dancer in the group. In fact she realistically blends in as just another member of the troupe. This is precisely why it makes no sense that she is the only dancer whose life outside of the context of the ballet company is given more than a cursory glimpse. Especially since, in all honesty, she is one of the least interesting characters. I would much rather have seen more of the aging diva, or the kid with the pushy father who gets cut from one of the dance numbers, or the bitchy black gay dancer. But except for brief snippets of these characters lives we get a bland romance that has little to do with the focus of the movie and seems jarringly out of place with the documentary style in which the rest of it is filmed.

As Scott mentioned actual members of the Joffrey Ballet of Chicago portray the majority of the characters, and while this certainly adds to the authenticity of the movie it limits the dialogue and storyline possibilities considerably. I went into the theater expecting Altman to do for ballet what he did for country music in Nashville. Clearly he has much respect for the art form and intended this as a tribute. Unfortunately he seems to have misplaced his legendary ability to intricately weave together the lives of his numerous characters.

And while I agree that the dance numbers are beautifully shot he treats them with such reverence that it removes most of the joy from them. And instead of letting our anticipation build as the movie progresses he seems to throw one in every five minutes or so.

The movie flickers to life in the rehearsal scenes or whenever Malcolm McDowell is on the screen. And to give Neve Campbell her due, she clearly trained hard to get into dance shape for the part. Still if I hadn't seen his name in the credits I would never have guessed that Robert Altman was at the helm of this disappointing movie. 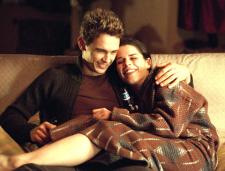 Highly entertaining is the last comment I would use for The Company. This is probably the most boring movie I have ever sat through. I just got off of my knees, as I was deep in prayer thanking God for the fast forward button. Having zipped through most of the dance scenes I cut at least 30 minutes off the running time. What did I miss, flat chested girls and muscular assed men jumping around a stage?

One guy needs a place to stay. Ooh, I am on the edge of my seat. One dancer thinks he is better than he actually is. Wow, the suspense builds. One girl gets a boyfriend. I cannot remember, but has that been done in a movie before? She also gets to star in the big show. I never saw that coming.

Unless you are a ballet aficionado or a hard core Neve Campbell fan, this movie has absolutely nothing, and I repeat nothing, to offer except mind numbing boredom. I would rather sit through a twenty four marathon of Dancing with the Stars than watch this film of ordinary events in the lives of some unremarkable characters.

Now where was I? Oh yes! Dear Lord thank you for the blessing of having that movie be over, and that I may never have to sit through it again. In the Lords name I thank you.