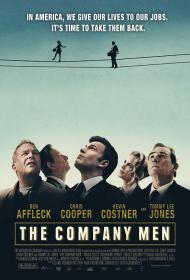 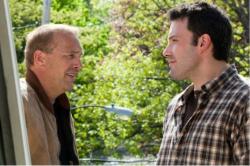 Kevin Costner and Ben Affleck in The Company Men.

The Company Men is a tepid, sloppy melodrama about the effects the recent recession has on a group of men, all of whom get laid off from cushy long held office jobs when the company they work for downsizes. It is standard movie of the week quality with a rather dull script by writer/director John Wells. This is his first feature film having made a name for himself on television with ER and The West Wing. No offense but if this movie is any indication of his talent level then perhaps he should stick to the small screen.

Ben Affleck, Tommy Lee Jones and Chris Cooper play three men, at different stages in their lives, all of whom are laid off from high paying jobs at the GTX Corporation in Boston. Affleck is a sales executive bringing down 120 grand plus bonuses per year. Jones started the company with owner Craig T. Nelson and acts as the conscience of the company as Nelson orders thousands of jobs cut to appease share holders. Cooper is an executive somewhere between the other two men.

We see how being fired affects each of these men’s lives over the course of one year.

The story focuses mainly on Affleck’s Bobby Walker. He reacts with anger followed by denial and continues to drive his Porsche and spend his afternoons playing golf in a misguided attempt to appear successful. His wife has a better grip on the situation. She eventually persuades him to sell the car and their house and they move in with his father.  He gets a blue collar job doing carpentry work with his brother-in-law (an underused Kevin Costner representing the voice of the working class) while continuing to search for another sales position.

What’s interesting about this movie is that it focuses on the effects downsizing has on wealthy office workers and not on the thousands of laborers that were also thrown out of work. Sure what Affleck and his family go through is disruptive but I never had much sympathy for him. At no point does his lifestyle fall to the level of being actually poor.

All of these old pros handle the acting chores well with Tommy Lee Jones giving the best performance as the movie’s conscience. He represents the sympathetic rich guy to balance Nelson’s greedy corporate stereotype. The one thing the movie does well is point out the growing disparity between the classes. Even as the country struggles through a recession the wealthiest percentage of society still manages to get richer while eliminating costs at the expense of working class jobs.

The Company Men’s heart is in the right place and it features a stellar cast of actors, but its story isn’t nearly compelling enough.

As Patrick wrote, this movie focuses on the effects downsizing has on white collar workers and not blue collar workers, but Patrick's lack of sympathy for Bobby Walker is cold. Bobby and his family never become "poor" by some standards but they still go through hardships. Bobby went to college and worked his way up the ladder, building a life for himself and his family, only to have it ripped away. What part of your heart has to be missing to not sympathize with Bobby when he finally admits to himself that he is in financial trouble and cries to his wife, "I am a 37 year old unemployed loser who can't support his family."

Patrick argues that at no point does Bobby's lifestyle fall to the level of being actually poor. Poor is relative to one's situation. The poor in the United States live very comfortable compared to the poor of Rwanda and many other places around the world. So I guess Patrick should not feel sorry for American laborers losing their job either because they will get tax funded food stamps and welfare and still live better than most poor around the world.

If you cannot guess by now, I felt very much for Bobby and his situation. As a married father of two, few things scare me like the thought of losing my job. I would feel as much of a loser as Bobby. The thought of failing my wife and kids by not being able to provide for them is a nightmare I hope to never experience. I was not so caught up in the drama of Gene, who is clearly very wealthy and able to retire with minimal, if any discomfort. Phil has a sad story line but is not given enough screen time for me to emotionally invest in.

I also disagree with Patrick when he wrote that this movie points out the growing disparity between the classes. That is not at all the case here. At no point is this film about class war fare. If anything, this film is about how the manufacturing business in the United States used to be about actually making something, but has now become about numbers and making stock holders happy. The Company Men is about surviving those nasty curve balls life throws at us. As Kevin Costner says to Ben Affleck, "Sometimes I'm up. Sometimes I'm down. It all comes out in the end." Speaking of he ending, it is far too simple even if it is intended to inspire. 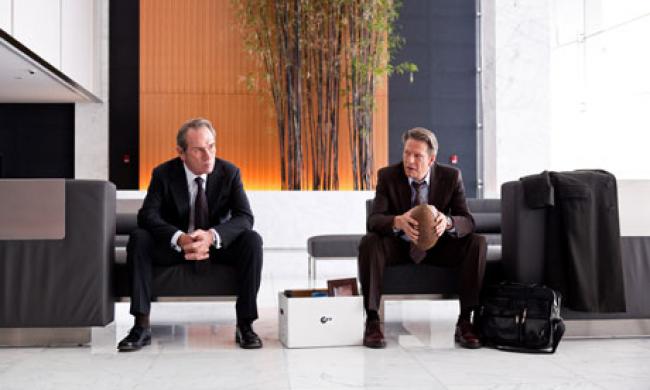 Tommy Lee Jones and Chris Cooper in The Company Men.

Patrick, your lack of empathy is surprising. Your review sounds a bit like it was written by someone from the "Occupy Wall Street" movement, particularly with the line, " a group of men, all of whom get laid off from cushy long held office jobs when the company they work for downsizes." Nowhere in the film does it say or show these guys as having "cushy" jobs. Unless your definition of "cushy" is any job that doesn't involve manual labor. I felt for Affleck's character, even during the phase when he was so deep in denial that he was simply making his situation worse.

Like Eric I didn't think this movie was about the gap between rich and poor, but rather how wealth generation has changed. It shows how GXT, the company in the title, used to be about manufacturing but is now more concerned with instant gratification of the shareholders than about producing something. The overly neat ending is about just that with Tommy Lee Jones' opening an old school shipyard that will some how buck the system. It ties the movie up with a happy ending bow, but is quite simplistic.

Overall though, my opinion of this movie isn't that far from my brothers. The film is well acted, but the writing and direction are middle of the road bland. As Patrick said, the plot is movie of the week melodrama. It's only the big name cast that elevates it. Even the supporting cast features some famous faces. Patrick mentioned that Costner is underused and I agree, but so is Maria Bello who has no character of her own except in relation to the male characters, either acting as the bitch to Affleck's character or the lover to the much older Jones's. But then apart from Affleck's Bobby, all of the characters feel underwritten.

Released in 2011, this was Hollywood trying to be topical and generally failing. The financial crisis was still front page news and this feels like a movie studio trying to cash-in on that story, only without any real understanding of it. Instead they produced a generic film that will likely be forgotten. I know I'm already starting to forget parts of it myself and I just watched it yesterday.