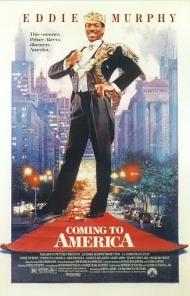 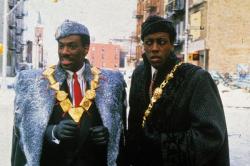 Eddie Murphy and Arsenio Hall in Coming to America

Coming to America is Eddie Murphy's most romantic comedy. It is essentially a very chaste romance in which the couple in question do not even kiss until the last scene. It makes for a more heartfelt film than an erotic one, but it is contradicted by some scenes that feature topless women. In one early scene, a naked woman surfaces from beneath Murphy's bath water with sponge in hand and says, "The royal penis is clean, your Highness." As classic as that scene has become, it seems out of place in a film that never again becomes so sexually frank.

Akeem is a very spoiled prince from the made up African country of Zamunda. As he says, "I am a man who has never tied his own shoes before!" On his 21st birthday he is presented with a woman he is to marry.  Akeem does not want an arranged marriage with a woman he has never met. He instead decides to go to America to find a woman who will love him for who he is and not just obey him like a servant.

Accompanied by his man servant and best friend, Semmi, Akeem goes to Queens, New York to find a bride. He pretends to be common, living in a ratty apartment and getting a job at a McDonalds knock off restaurant called McDowells. They hit the clubs and meet all kinds of women. Akeem notes, "Is it just me, or does every woman in New York have a severe emotional problem?"

Akeem ends up falling in love with Lisa, the daughter of the owner of McDowell's. She is an intelligent girl who does the books for her father.  She is likewise being pushed into a relationship with a man she does not like, but her father approves of him because he comes from a wealthy family.

The hilarious script is filled with mistaken identities and confusion.  Murphy and Hall each also play several small roles, including some barbers an old Jew and my favorite, a preacher played by Hall. "He helped Joshua fight the battle of Jericho, he helped Daniel get out the lion's den, he helped Gilligan get off the island." He hosts a pageant where Akeem first meets Lisa.

With this film Eddie Murphy really proved his talent. Besides playing several roles, he is also given writing credit for the story. Although he would make some sequels to his earlier hits Beverly Hills Cop and 48 Hours, this was Eddie Murphy's last real big hit film before reinventing himself as a family film actor.

Coming to America is full of memorable lines. Akeem's father tells him, "So you see, my son, there is a very fine line between love and nausea." When getting an apartment, the land lord yells at a bum who just fell down some stairs, "Hey Stu, your rent's due, motherfucker! Now don't be pulling that falling down the stairs shit on me again, you hear!" The rated "R" language seems a bit at odds with the "G" rated love story. However, the film's most memorable line is when Akeem gets yelled at shortly after arriving in America and asks Semmi, "What does dumb fuck mean?"

I agree Eric, this is one of Eddie Murphy's funniest movies and his most romantic. The jokes come fast and furious and the cast is filled with famous faces in supporting roles and cameos. This was the first movie in which Murphy played multiple characters, something that would become a trademark of his in the years since. In addition to the barber and the old Jewish man he also plays a flamboyantly effeminate singer whose band is named Sexual Chocolate.

There is a brief tribute to Trading Places, which was the first movie Eddie Murphy made with director John Landis. Don Ameche and Ralph Bellamy reprise their roles from that earlier hit as the Duke brothers. “Mortimer, we're back.” This was also future Academy Award winner Cuba Gooding's movie debut, although he doesn't get even one line of dialogue.

Samuel L. Jackson gets one scene as an armed robber that attempts to rob McDowell's only to be foiled by Akeem and Semmi. There is also a funny sight gag involving Darryl's family, all of whom use a bit too much Soul Glo hair product. It's a spoof of Afro Sheen, which was very popular in the processed-hair 1980s. When Darryl's family members get up from a couch at Cleo's house they all leave visible wet spots from their hair gel.

Eric mentioned many of the memorably funny lines of which this movie is filled. Here are some of my favorites...

Comic Louie Anderson plays Maurice, a guy that works at McDowell's. He gives the following sage advice to Akeem and Semmi, “Hey, I started out mopping the floor just like you guys. But now... now I'm washing lettuce. Soon I'll be on fries; then the grill. And pretty soon, I'll make assistant manager, and that's when the big bucks start rolling in.”

When Akeem attends a basketball game he runs into a citizen of Zamunda who recognizes him and prostrates himself on the floor in honor of his prince. He exclaims, “This is the greatest day of my life!” Darryl incredulously asks Akeem, “Who was that?” “Oh, just a man I met in the bathroom...”

There are tributes, knowing winks, and foreshadowing of future movies for those interested in spotting them.

In a sly homage to Star Wars, King Jaffe Joffer (James Earl Jones who famously provided the voice of Darth Vader) echoes one of his lines from The Empire Strikes Back. When he shows up unexpectedly in Queens to see his son Akeem, he says, “Do not alert him to my presence. I will deal with him myself.”

When he arrives in New York King Joffer is shown wearing a lion's head and fur as a sash (see photo). This foreshadows his role as the voice of King Mufasa in The Lion King. But that's not all. Madge Sinclair also voiced the role of Queen Serabi in that animated classic.

Coming to America is one of the best comedies of the 1980s.

Eddie Murphy in Coming to America.

Although the casual nudity at the beginning of the film does seem a little out of place compared to the other aspects of the film, you have to remember that it was made in the 1980s when screen nudity in comedies was much more common. However, it's not the only aspect of the script that explains its R-rating. There is also the hand-job at the basketball game and the heavy use of profanity, particularly the word "fuck". It's easy to see Eric's point though. With just a few small edits this could have been PG-13.

Eddie Murphy was a huge star when this film was released and rumor has it that it had gone somewhat to his head. Director John Landis has commented on the differences between directing Murphy in Trading Places and then again in this film, "The guy on Trading Places was young and full of energy and curious and funny and fresh and great. The guy on Coming to America was the pig of the world... But I still think he's wonderful in the movie." They would later reconcile and Murphy personally asked him to direct 1994's Beverly Hills Cop III. What's interesting about Murphy's part is that basically he's playing the straight man throughout the film, at least as Akeem. He lets the supporting cast generate most of the laughs. He gets more laughs in his small parts in heavy makeup than he ever does as Akeem. He's brilliant in these small parts, which harken back to his SNL days.

One interesting choice of Murphy's is the accent. It's not very specific and only some of the rest of the cast even tries one and those that do, don't seem to be trying to convey the same one. James Earl Jones, for instance, simply delivers all his lines in that fantastic voice of his, but with an American accent.

Whatever the size of Murphy's ego during filming, he still maintains his onscreen charisma. He's incredibly likeable and he keeps you invested in what is basically a very predictable plot. There have been other black comedians since Murphy's career highpoint in the 1980s, but none have ever been able to draw as diverse an audience to their films as Murphy. Every major part in this film is played by a black actor apart from Louie Anderson and yet this movie was as popular with white audiences as it was with black ones. It would go on to become the 3rd highest grossing film of 1988. The marketing of films tends to aim at different demographics, but Murphy played well across the whole spectrum in a way that was quite rare.

I agree Patrick, Coming to America is one of the great 1980s comedies. It also holds up pretty well more than 25 years later.