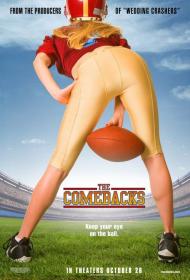 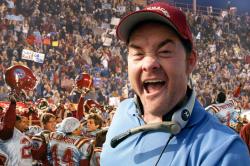 David Koechner in The Comebacks.

Why oh why do I keep going to see these types of movies? Date Movie, Epic Movie, the increasingly unfunny Scary Movies and now The Comebacks; all of them share the same idea of sending up a certain genre of films and all of them fail to do anything but provide the barest of chuckles.

If ever there was a genre that needed the air taken out of it, it has to be the sports-as-a-metaphor-for-life genre. Granted there have been some great serious movies of that type, but too often they have the same tired old plot and sports clichés that are the result of just sheer laziness. You know the story; a has-been player or coach is called out of retirement to mentor a down on their luck team and somehow he manages to turn this ragtag group of misfits into winners, while redeeming himself in the process. We've seen it a million times.

It's that same tired story here. Koechner (best known for playing Champ, the sportscaster in Anchorman), is the unluckiest coach in the history of sports, but he's called upon to coach one last team; a down on their luck football team at Heartland University in Texas. The team has the usual losers and misfits. There's the geek, the requisite girl on the team (this time an Indian kicker reminiscent of Bend it Like Beckham), the quarterback with Daddy issues, and the superstar who puts himself above the team.

Using the machine-gun fire style of humor that started with the Airplane movies, the Comebacks shoots as many jokes at the screen as it can in the hopes that some of them will hit the target. However, where Airplane probably hit about 8 out of 10 of its jokes, The Comebacks manages maybe about 3 out of 10. Like Epic Movie and Date Movie, it seems to think that just referencing a movie constitutes a joke.

There are a few chuckles to be had though. I laughed hardest at the under-sized Rudy-like figure who goes in the game only to learn that you need to be careful what you wish for.

Seriously though, despite the minimal enjoyment to be found here, can't we call a moratorium on all of these spoof movies? Apparently not, judging by the preview for Epic Movie 2 that ran before this one. 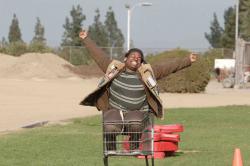 Jermaine Williams in The Comebacks.

Okay, UNCLE! UNCLE! I give up. I surrender. Enough already with the movie parodies. Has this genre not overstayed it's welcome yet? If The Comebacks has anything to say about it, it is.

The Comebacks is a spoof on many recent sports movies. Being that these are less seen movies than epic or horror films just shows how dry the parody well has run. From Bend it Like Beckham to such film flops as Stick It, The Comebacks desperately look for jokes in every sports movie of the last 5 years.

What jokes they find are so obvious that they render themselves humorless. They make fun of how old Rocky is. Anyone who saw the latest Rocky movie has already made that joke themselves. One character is named Aseel Tare. Of course this is a nod to the character from Friday Night Lights who gets injured. The Comebacks cannot just mention his name in passing and let the joke happen. They have to dedicate an entire scene just to his name. This minor joke was worn out before I even got it.

This film is at such a loss for jokes that it even plays the race card. Early on the coach's daughter tells her dad that one of his players is her boyfriend. Even though the boyfriend is standing right in front of them both, she still has to announce that he is black to her father. I am not even sure how that was meant to be a joke. Another joke, that works slightly better, has a black coach make a big deal about playing all of his black players and bench his only white, or as the coach says, "marshmallow" player.

With a "B" cast lead by David Koechner and Matthew Lawrence you know the producers didn't just save money on writers. The choice of cameo appearances are likewise questionable. Andy Dick plays a referee and Drew Lache, Nick's brother who won Dancing With the Stars a few years back, rides on a float? Saying the makers of this film did a half ass job is giving them half of an ass more credit than they deserve.