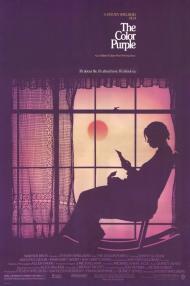 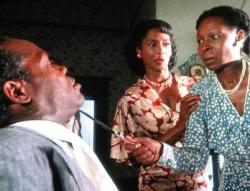 The Color Purple is a classic motion picture and (with the possible exception of The Wiz) is the most famous Hollywood movie to feature a mostly African American cast. Director Steven Spielberg proves yet again that he is the heir apparent to Frank Capra with the old-fashioned style he employs, most notably in the music-swelling, heart-tugging, spiritually-uplifting, happy ending. This is an epic family drama like they don’t make anymore. It was already out of date in 1985 with its sweeping storyline, dramatically aging characters and 2½ hour running time.

Taken from the Pulitzer Prize winning novel by Alice Walker, The Color Purple is the story of three women whose lives intertwine, all struggling against oppression in the American South from 1907 to the late 1930’s. Black men, white people in general, poverty and illiteracy are the enemies in this sometimes heavy-handed and often schmaltzy movie.

At the 1985 Academy Awards Color Purple went home without a single statuette, despite its 11 nominations, including Best Picture. In the entire history of the Academy Awards only one other movie has garnered this many nominations without a single victory, 1977’s The Turning Point. Spielberg was not nominated for Best Director and Danny Glover failed to receive a nod for his acting. Future icons Whoopi Goldberg and Oprah Winfrey (both making their feature film debuts) were nominated for Best Actress and Best Supporting Actress respectively. Margaret Avery was also nominated in the supporting actress category.

Despite the somewhat grim circumstances described herein, The Color Purple is a nostalgic and romanticized version of the time and place depicted. There is a halcyon glow to the countryside and you can practically hear the flies droning by and smell the sweet honeysuckle on the gentle breeze. No matter the time of year there always seems to be full grown corn stalks in the fields and a golden and russet sunset in the background.

Celie is the central character. She is sexually abused by her father at a young age. She has two children by him and they are taken away from her. Her father then “sells” her in marriage to an abusive and domineering man. Celie’s sister Nettie comes for a visit. There is an unbreakable bond between these sisters. When Nettie refuses Mister’s sexual advances he sends her away in the movie’s most powerful and truly heartbreaking scene.

Next we are introduced to Sofia the overweight but proud soon-to-be wife of Mister’s son Harpo. She is strong minded and a physically imposing woman. She serves time in jail when she refuses to become a white woman’s maid and then hits a white man after he slaps her for “sassing” the white woman. The scene where Sofia goes home for Christmas is another heartbreaker in a movie designed to rake the audience’s emotions over the coals before finally setting them free on gossamer wings.

The third woman is Shug Avery. A minister’s daughter gone bad. She is wild, loose and likes to party. She is also a glamorous entertainer. Miss Celie has never laid eyes on anyone like her before and immediately falls under her spell. Shug has an on again/off again affair with Albert (Mister) over many years. She is instrumental in Celie’s asserting herself and finally breaking free from Mister’s rule. She also teaches Celie - who has only known impersonal and mechanical sex with Mister - what it is like to make love to another person.

Celie, Sofia and Shug all go on a journey of discovery and eventual redemption/triumph. The performances by all three women are quite remarkable. Danny Glover deserves a mention for playing the thankless role of Mister. He embodies many of the worst qualities that a man can have, especially in his views towards and treatment of women. Glover brings humor and a likable personality to the part, enough so that his eventual redemption seems plausible. Not to excuse his numerous faults and abominable behavior towards Celie, but Mister was very much a product of his environment and upbringing.

The Color Purple has many quotable lines that fans of the movie love to recite… “You told Harpo to beat me.” “You sho’ is ugly!” "You just a big ol heffa." "See Daddy, sinners have souls too." “I don’t know HER either.” "I curse you. Until you do right by me everything you think about is gonna crumble!" …and many others.

For all the trials and tribulations of these characters the ending is straight out of the Frank Capra School of Filmmaking. Your heart will swell and a tear or two will cloud your eyes. These characters and their heartaches are very real but Spielberg’s direction reeks of cheap sentiment. The result is a critically mixed bag of a movie that is eminently and endlessly watchable. Color this shade of Purple a classic! 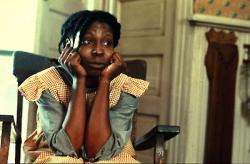 Whoopie Goldberg in The Color Purple

Patrick wrote that The Color Purple is the story of three very different African American women but I will say that it is four. During this time period, a black woman's prospects were extremely limited. Each takes a different approach to their similar circumstances.

Celie is extremely passive. Her father and husband abuse her physically and sexually. They each treat her more like property than a person. Even Mister’s children walk all over her. Celie’s sister notices it and tells her to stand up to the brats. Celie is submissive because that is all she has ever known.  When a grown Harpo asks how to control Sofia, Celie responds with what works on her, “Beat her.”

The problem is that Sofia is not passive like Celie. She fights back. In one of the more dramatic and funnier scenes, a bruised Sofia confronts Celie after Harpo hit her. She explains that she has had to fight her father and brothers her entire life. We then see Harpo, whose eye is nearly swollen shut. Sofia simply wants respect and the only way she knows how to get it is by beating anyone up who crosses her. Notice how she turns down the job offer from the condescending white woman.

Whereas Shug fled from the security of her father’s religious teachings, Nettie found salvation in it. When kicked out of Mister’s home, her future became bleak. In the movies greatest coincidence, she ends up as the nanny of her very own niece and nephew with the missionaries.  Her story is the least realistic but it brought something to mind. Although we felt very sorry for Celie having her children taken away, she could not have come close to providing them with the life they were given by the adoptive family.

Alice Walker wrote in a way that we come to understand these angry black women. The story however, has very little payoff. Mister never gets any comeuppance. His help with immigration is way too little way too late to redeem himself. For a film with plenty of overwrought emoting, I waited for the scene where Celie tells Mister off, but all we get is a quiet little brief confrontation. Spielberg directed for dramatic and humorous affect but not always when it was needed most. I do not find this movie eminently and endlessly watchable but it is a film that everyone should watch at least once. 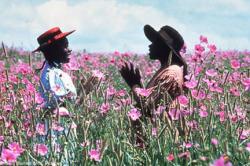 Given that it took almost 30 years for me to get around to finally watching this movie once and that having seen it I now have no plans to ever watch it again, you can probably guess that I too failed to find it endlessly watchable. It does feature some very impressive debut performances and Spielberg brings his usual cinematic eye to the proceedings, but seeing it once was definitely enough for me.

At the time when this movie was made there were some people who questioned the decision to have Spielberg direct it at all. How would he be able to relate to a group of poor, black women in the deep south during the early years of the 20th century? According to Spielberg he too had doubts about whether or not he was the right man for the job. He expressed these doubts to Quincy Jones, one of the film's producers, who responded by asking him, "Did you have to be an alien to direct E.T.?" Oliver Stone also spoke up in defense of Spielberg as director, calling the finished film, "an excellent movie, and it was an attempt to deal with an issue that had been overlooked, and it wouldn't have been done if it hadn't been Spielberg. And it's not like everyone says, that he ruined the book. That's horseshit. Nobody was going to do the book. He made the book live again." What the critics and those who were complaining missed was that the reason this movie works is because we feel for the characters in this movie because they are people rather than because of their gender or skin color.

This was the big screen debut for both Goldberg and Winfrey and they both do excellent work. Goldberg's part is very restrained and underplayed but is quite effective. The film's greatest emotional scene comes, not at the schmaltzy climax, but in one quiet moment between Celie and Shug. When Shug convinces Celie that she has a beautiful smile and persuades her to keep her hands away from her mouth when she smiles or laughs, is the most touching. Prior to this Celie has kept everything locked up inside herself. It will still take years before she finally breaks free, but this scene marks the turning point in her life. Winfrey's role is much showier but it suits her larger than life persona. She brings not just drama, but also some much needed comic relief.

Spielberg has always had a knack for setting up scenes that look like Movies with a capital M. There's something very cinematic about his films. As Patrick wrote, he gives the countryside a sort of golden haze, making the fields of flowers quite beautiful. The setting and events are often in sharp contrast to the picturesque surroundings.

The biggest weakness in the movie is the heavy handed schmaltz and sentiment that Patrick also referred to. It feels overdone and overwrought. I was glad to see the happy reunion at the film's climax but I never came close to shedding a tear. There's far too much melodrama and the plot is pure soap opera.

No doubt when he took on this film, Spielberg was trying to prove that he could make serious films beyond just the summer blockbusters that he was known for. He has since proven that to be correct, moving freely between serious films and more commercial projects, having since even won the Oscar for Best Director. The Color Purple might not be his greatest work, but without it who knows where his career would be or if we would have seen Schindler's List, Saving Private Ryan, or Lincoln, among many other films. It was an important stepping stone in his career, but it isn't one that feels as though it has aged very well.