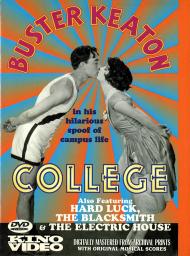 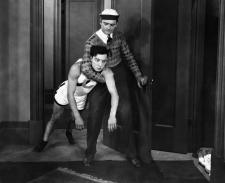 College is a hilarious short Buster Keaton feature. It is just over an hour. Their is a rumor that Keaton cut a football sequence to avoid comparison to Harold Lloyd’s college themed film, The Freshman, released two years earlier.

At his high school graduation ceremony, Ronald gives a speech where he praises education and belittles sports. He does this as his clothes shrink. He was caught in the rain and they have since dried. The object of his affection, Mary, dislikes his speech and informs him that until he tries athletics, she will not go out with him.

Mary, and Ronald‘s rival for her affection, Jeff, head off to Clayton College. Ronald follows them, but has to work his way through school. The main body of the film is Ronald trying out for sports and trying to keep a job. He fails miserably at both.

My favorite sequence is when he goes out for the baseball team. He has no clue what he is doing. Three players on the side bust a gut laughing at all of his ridiculous attempts. My favorite moment is when he runs around the bases thinking he is about to score. He slides into home head first, then flips his body over. The Great Stone Face looks so serious doing it all, only to find out that the ball was caught and he never tagged up.

He also tries out for the track team. In a sequence that seems to go on a bit too long, Ronald discovers he is just not meant for sports. The Dean steps in and gets Ronald on the rowing team as the coxswain.

After winning the big contest, Ronald gets a call from Mary. Jeff has been kicked out of school, and is trying to get her expelled as well by being in her room. Having a boy in a girls room was apparently enough to get you kicked out. Using all of his new sports skills, Ronald races to rescue Mary. He high jumps over a bush. He hurdles over some hedges. He pole vaults into Mary’s window and fights Jeff.

College has a scene that would now seem very racist. Ronald gets a job at a restaurant that had a sign in the window that read, “Colored waiters wanted.” Keaton wears black makeup, and pretends to be black. A black lady cook flirts with him. When she, and the rest of the staff, find out he is white, they chase him away with knives.

One last thing of note is that the name of the first row boat is DAMFINO. Keaton had previously used that name in The Boat (1921). Both vessels meet with the same fate. 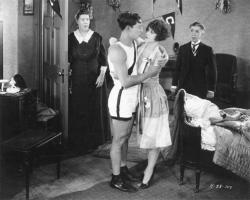 The General, is generally considered to be Keaton's masterwork, but it wasn't a hit at the time of its release and so Keaton decided to do something more commercial for his follow-up. The result was this lukewarm comedy that I was far less charmed by than Eric. Keaton is his usual self, doing the best he can with the material, but the material itself just isn't as fresh or as funny as his earlier work. Eric mentioned the similarly themed Freshman by Harold Lloyd, which to my mind is a much better film.

I first credited my disappointment in the film to the fact that it was directed by someone other than Keaton. Perhaps James W. Horne just didn't have the comedic vision to bring the best out of Keaton. However, Keaton said in an interview years later that he directed almost all of this film and that credited co-director James W. Horne did virtually none of it. Keaton said that his business manager talked him into using Horne, but that Horne proved "absolutely worthless to me... I don't know why we had him." So this was all Keaton.

Another thing of note in the film is that it features one of the rare instances where Keaton used a stuntman rather than doing a stunt himself. During the film's climax, his character pole vaults through the window of his girlfriend's dorm room, for which he used the services of a stuntman, because as he would later explain, "I could not do the scene because I am no pole-vaulter and I didn't want to spend months in training to do the stunt myself."

Although I was disappointed overall, like any of Keaton's films, there are some nuggets of humor here. The final boat race is the highlight, with Keaton attaching the rudder to his butt and steering the boat to victory and then later forgetting it's there causing an embarrassing moment with a woman on the dock. Like Eric, I enjoyed the baseball scene, which I have a feeling Keaton probably enjoyed as well since he was a well known baseball fanatic.

Perhaps the film's biggest irony is that Keaton was one of the most athletic actors of his generation and yet here he fumbles with every sport. During the scenes at the track, which I agree go on too long, you can see that he was in good shape. He wasn't bulky, but the muscles on his arms are clearly defined.

As for that boat, the DAMFINO, or the "Damn if I know" to spell it phonetically, according to busterkeaton.com, as a child Keaton would vacation in Muskegon, Michigan. While there, he and his family made friends with an actor named Joe Roberts. Roberts ran a dock and one Summer day, a boat pulled up to that dock from Chicago, owned by some theatrical agents. The name of their boat? DAMFINO. Apparently the name stuck with Keaton. 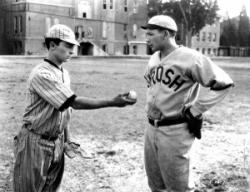 Buster Keaton tries out for the baseball team in College.

Despite some clever moments this isn't one of Keaton's best films. His career had already begun to lose steam at the box office and this movie was certainly a step down in artistic quality from The General. Keaton would make a few more silent movies but his career would never again achieve the rarefied heights it had attained during the early to mid 1920s.

Keaton mars his legacy with the unfortunate black-face restaurant scene. I realize this type of humor was prevalent in those days but that doesn't excuse it. I'm sure to black people it seemed just as racist in 1927 as it does today. Neither Chaplin nor Lloyd resorted to it with the propensity that Keaton did. It is a recurring gag in many of his films. The best thing about the scene is the end where he gets chased out of the restaurant by the black staff brandishing knives.

Ronald's antics on the athletic field are amusing but I agree with Scott that Harold Lloyd's The Freshman is a funnier movie. I did enjoy the way Ronald incorporated all of his new-found skills in the climactic race to the rescue. And the Great Stone Face was such a likable character that you cannot help but root for him in all his films, even the lesser ones.

In fact, I've come to realize that Buster's expressionless persona in the porkpie hat had more soul than either Chaplin's Little Tramp clown or Lloyd's mild mannered glasses-guy. His blank countenance actually carries more emotional weight than Chaplin's celebrated pathos or Lloyd's easy going all-American charm. His sad eyes seem bottomless and he never gives up despite whatever obstacles he faces.

At 31 Keaton pulled off the physical stunts with ease and it's only in the few closeup shots that he looks a bit long in the tooth for a college freshman. Buster Keaton loved making movies and his enthusiasm for his craft is as obvious as it is infectious. He was so profoundly talented that even a lesser movie like College still has plenty to offer in the way of entertainment.