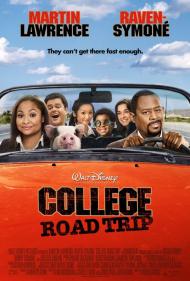 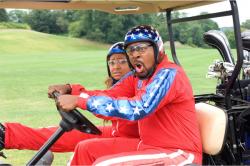 College Road Trip is proof positive that a good movie can be made with a "G" rating. Swearing, nudity and violence have their place in cinema but it does not have to be present to make a film enjoyable.

Melanie Porter is about to graduate and head of to college. Her dad, police chief James Porter, is a protective father and wants her to attend a college nearby so he will feel that he still has some means of keeping a watch full eye on her. Melanie has her heart set on one out of state.

Before Melanie can jump in a car with her two best friends, for a road trip to visit her college, her dad shanghais her into going with him. Unknown to them, her little brother, a child genius who talks to his pet pig, stows along. Mishaps abound, such as ruining a wedding, destroying James's vehicle, and skydiving. Meanwhile, the father/daughter relationship gets a bit strained.

Lucky enough for them, and the audience, Donny Osmond shows up to sing and annoy James. Osmond plays another father on a college road trip with his daughter, only they have a great relationship. They always sing together, and smile often. They provide some of the films biggest laughs. "People. People who need people, are the luckiest-ack-I swallowed a bug."

The movie tries to tug at a parents heart strings. Several moments have James reminiscing about when Melanie was a little girl. It is a direct lift from a scene from Father of the Bride where Steve Martin has a montage of his daughter growing up. One of James's last lines may strike a cord with anyone who has had a child grow up in front of their eyes, "Where does the time go?"

By the end of the movie, James, of course, learns to let go and Melanie understands her father's protective ways are just a form of love. Best of yet, Donny Osmond pops back in to steal one last scene and everything happened without one four letter word or anyone removing any clothes. College Road Trip is the best family film of the year.