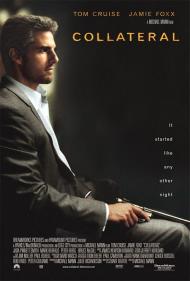 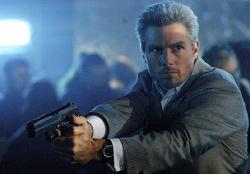 Collateral has a lot in common with 2001's Training Day. Los Angles is the setting for both and each movie takes place over a limited period of time. Training Day lasted a day, while Collateral takes place during one night. In Training Day, Denzel Washington played against type by starring as the villain. In Collateral, Tom Cruise plays against type by starring as the villain. Accompanying the big stars in their violent car rides around LA, are two inexperienced characters. Washington had a rookie cop played by Ethan Hawke, while Cruise has an innocent cab driver played by Jamie Foxx. Both movies are intense and action packed, and both of them have somewhat over the top endings.

Foxx, who gives a career altering performance, plays Max, a cab driver who has the bad luck of picking up Vincent, a hitman in town to kill five people connected to the trial of a highly placed mobster. Vincent hires Max to drive him around to five 'business meetings', but when Vincent's first hit goes badly and the victim falls out a window and on top of Max's cab, Vincent confesses the truth and coerces Max into helping him finish his night's work.

My one concern going into this movie was in wondering just how the film makers were going to convincingly come up with reasons why Max stayed with Vincent. Surely, I thought there would be a way for Max to get away while Vincent was doing his work. My fear on that score proved groundless. Through the use of physical restraints and threats of violence to others, it remains fairly reasonable for Max to remain with Vincent.

Michael Mann's direction is stylish and energetic, as befits the man who created Miami Vice. In his hands, the city of Los Angles becomes the third main character of the film. The action sequences, particularly the fight in the nightclub, are superb. All of his shots are cinematic and fill the screen. This is not a movie to be seen butchered on a pan and scan DVD.

Perhaps the most surprising thing about this movie is that, despite being top billed, Tom Cruise is not the star. Jamie Foxx as the hero of the story gets the most screen time and he makes the most of it. Cruise is in Terminator mode as the lethal hit man and he plays it with admirable restraint.

My one and only complaint against this otherwise splendid movie, is the so-extreme-it-could-only-happen-in-the-movies coincidence that mars the climax of the story. Without giving the ending away, I can only say that I guessed where the plot was going, but hoped that I was wrong. Unfortunately, I was not.

With the possible exception of The Bourne Supremacy, Collateral is the best action movie 2004 has offered us yet. 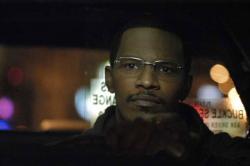 Like Scott I enjoyed this movie. It is fast-paced and intense without being implausible. Tom Cruise (looking like Richard Gere's younger brother) is excellent as Vince the ultra-cool hitman. Vince is a monster with no remorse for his victims and yet, because he's Tom Cruise, a part of me wanted to like him. Jamie Foxx is superb in a tricky role. Max the cabbie is the heart of the story but he is also asked to provide the comic relief. Fortunately the script is intelligent and nuanced enough that it keeps it from being just another black guy/white guy buddy movie.

I didn't have a problem with the coincidental ending at all. It was set up in the first scene and was the only logical outcome for the story.

Taut action, dark humor and stylish cinematography can't make a movie great unless they surround a good script and vivid characters. Vince and Max are great characters. The best scenes in the movie are when they are together in the cab. Vince is the ultimate catalyst for Max. At the end of the movie you realize that as horrifying as his night was, Max is a much wiser man for having lived through it. He personifies the old adage that what doesn't kill you makes you stronger. 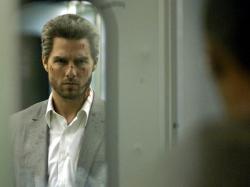 Scott and Patrick found the direction to be "stylish." I thought it was annoying. In one camera shot, you see Fox driving his cab on the left side of the movie screen, on the right of the screen is a smoke stack. Fox is talking to Cruise, but we don't see Cruise, we get to look at a smoke stack. I did not find this direction stylish, I found it stupid.

The soundtrack is killer. Hard beats dominate many scenes. Who ever edited this movie obviously liked the music as well. More than once there is a scene where absolutely nothing happens just so the makers of this movie can squeeze in another song. In fact, it takes two songs to drive from the fourth to the fifth killing. This isn't a musical. The songs are supposed to set the tone of the scene, not be the reason for it.

The writing fares a bit better than the direction and editing, but not by much. I like a line early in the film when Cruise makes his first kill of the night. Max says; "You killed him?" and Vincent answers; "No, I shot him. The bullet and the fall killed him." However the ending and final fate of Vincent is just plain ridiculous.

As my brothers wrote, the cast is excellent. I enjoyed seeing the coolest British actor working today, Jason Statham, in a cameo. I wish he had been in more scenes.

For an action movie, it only has one really good action sequence. The scene in the nightclub, with guns blazing, people running and the soundtrack thumping, is easily the best moment in the film. But it is only one great moment in a very uneven film.