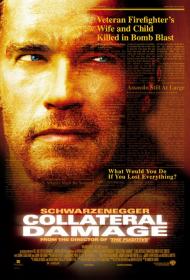 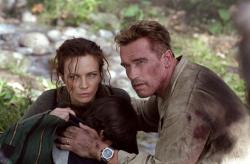 The timing of the making, and of the original release date for Collateral Damage is so eerily prophetic that it almost seems as if the psychic friends are working for the movie studios. This film stars Arnold Schwarzenneger as a fireman whose wife and child die in a terrorist's explosion. This movie could not have hit more home with 9/11 if it tried. In this movie the terrorist are Columbians trying to get the Americans out of their country. So as I watched this movie I just inserted Afghanistan or Iraq in, whenever someone said Columbia and the whole movie became a better film.

Arnold's character goes George Bush by heading to Columbia in an attempt to kill the terrorist. Here he is the action hero we have all come to know and love. He fights, shoots and blows stuff up. Other than a twist at the end, that I should have caught, this movie has very little originality.

In Commando he was the vindictive father. In The Terminator he was hunting someone down. We have seen all of this before. One scene that I liked was where he goes into a liberal "Free Columbia" organization office and tears it apart after they said on TV that his wife and child's death were just collateral damage in the fight for freedom.

As I watched this film I was actually struck by Arnold's performance. He is big and imposing. His character, like most of his characters, never takes any crap. He is the modern day John Wayne. This is Arnold reworking his routine, much like the Duke did in western after western. Either Arnold is getting better at acting or he, like Wayne, has such a huge movie persona that it just swallows up his character. Either way he is completely believable in this role.

The big thing that will make this movie remembered is that it so resembled current events. Much like Swordfish, this movie is sadly a better film due to the worst loss of life this country has ever known.