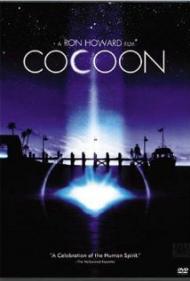 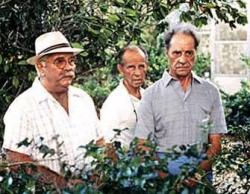 In his review for Ghost Story, Patrick wrote that in 1981 he, “…was in celluloid heaven.” because so many movie stars from the golden age of Hollywood were starring once again in major motion pictures. Bringing back stars of yesteryear did not end in 1981. Cocoon also put several elderly luminaries of the silver screen back in the spotlight. Don Ameche, who made his film debut in 1935, was enjoying a late in life comeback after starring alongside Ralph Bellamy in the Eddie Murphy/Dan Aykroyd comedy Trading Places (1983). Hume Cronyn made his debut in 1943. He plays the husband here to his real life wife Jessica Tandy whose first film credit was in 1932.

These three and the rest of the cast of elderly actors play a group of retired senior citizens living in a nursing home/retirement village in Florida. Three of the retired men; Art, Ben and Joe have a routine of sneaking into the empty mansion's indoor pool next door. One day a group of four strangers move into the mansion and begin placing large egg shaped rocks into the pool. The three men swim among the rocks and no sooner than you can say Ponce De Leon, they are soon feeling younger than ever. After their first swim they all rejoice in having erections. Later that night the women in their lives rejoice about it as well.

The four strangers are actually aliens, who are trying to retrieve things that were left in the ocean many years ago. Two of the aliens are played by children of famous movie stars. One is Tahnee Welch, who is the daughter of Raquel and the other is Tyrone Power Jr. The other young notable cast member is Steve Guttenberg, whose mere presence lets you know that this is definitely a film of the 1980s.

Cocoon tells two stories at once. The older folks find their lives renewed with youthful vigor. The pool acts as a fountain of youth. Whereas it makes them healthier it also causes some trouble. The other residences become suspicious and Joe cheats on his wife. The other story is of Aliens returning to Earth on an important mission that the old folks interrupt. At first their interaction is symbiotic. The earthlings' health improve while the aliens develop emotions. Then everything breaks down and the film works toward a dramatic conclusion.

Cocoon is a little bit of everything but not enough of anything. There is some humor to be found. When Guttenberg learns that he has leased his boat to Aliens he nervously tells them, “I wouldn't accuse you of dishonesty! I accuse you of being from another planet, but an honest planet!” There are out dated special effects. There is some amount of tension, such as when Ben’s grandson races to see him. There is also a bit of romance when Ameche seduces and dates Gwen Verdon as well as Welch and Guttenberg having alien sex.

The area it succeeds the best in is with the dramatic moments. One elderly friend, Bernie, refuses to get into the pool or take his wife in, even though her health is drastically failing. Bernie’s change of mind and conversation with Walter, the head Alien, is heart breaking.

I did not quite love this film as much as I did when I first saw it, but it still has its charms. The first time around I was far more caught up in the Aliens story but this time I was moved by the old folks. We learn very little of the aliens while we almost instantly recognize this friendly group of old people who have settled into their golden years. They could be your grandparents and like your grandparents, they are nice to visit with, as long as the stay does not last more than two hours, which is about the length of this film. 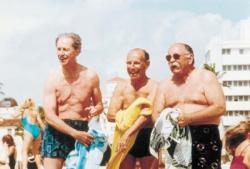 I had a similar reaction to Eric. Although I remembered this movie fondly, I didn't enjoy it quite as much this time around. There are still plenty of things to like, but it's far from perfect.

The alien's backstory is very vague. They never explain why it it took them so many centuries to return for their lost friends, or why they use human technology to retrieve the cocoons. Or even why, since apparently the cocoons are located within a day's journey from the Florida shore, the aliens were unable to leave the island of Atlantis before it was destroyed. Even if there wasn't room enough on the spaceship, it doesn't explain why they couldn't leave by boat. Also working against the alien side of the story is the fact that it's never resolved, at least not in this film. There is also the matter of the dated special effects, which I remember being impressed by at the time, but much less so 30 years on.

It is definitely the elderly cast that brings the real charm to the story. Don Ameche was indeed enjoying a late career renaissance and he even won the Best Supporting Actor Oscar for his performance here. He is a comic charmer, while Hume Cronyn provides a touch of drama, and Jack Gilford is responsible for the film's most touching scene. The elderly women also do fine work, but they are here strictly to play second-fiddle to the men.

Wilford Brimley is good in his role, but seems a bit of an odd choice because of his age. He was only 51 years old when this movie came out. That's only 4 years older than co-star Brian Dennehy and 9 years younger than Maureen Stapleton who plays his wife. I only wonder why they didn't hire some other older actor. Was Mickey Rooney too busy that year?

Cronyn and Ameche are impressively physical, despite being in their seventies. This is most noticeable in the pool scene where they perform several dives without the aid of a stuntman. Slightly more embarrassing is the break dancing scene where an obvious stand-in performs in Ameche's place.

This is a charming story and I too was happy to revisit it. However, it hasn't aged so well that I'm longing to ever watch it again, nor did it make me want to hurry out and rewatch the sequel either.

Cocoon is a wonderful film. The Oscar winning special effects haven't aged all that badly. They still work at any rate. And the details of the aliens' back story aren't really important. The aliens need only maintain an aura of mystery about themselves, which they do quite nicely. In essence they are more like angels than aliens.

The theme of the movie is immortality. These elderly men and women, nearing the end of their natural lives, are given a chance to halt the aging process and live forever. The catch being -there's always a catch- that they have to leave Earth and never see their friends or family again (until the sequel). The story wouldn't have worked with a younger cast. The fact that these are old people produces a much deeper level of poignancy. For most of us this would be an easy decision. After all, at most they have another 10-15 years of life if they stay here. I wonder how many would choose, like Bernie, to stay behind.

Eric mentioned how Cocoon was part of the last go round in feature films for aging stars of the studio era. I remember those years well. Cagney in Ragtime, Astaire in Ghost Story, Hepburn and Fonda in On Golden Pond. The cast here doesn't include any names as big as those icons but they were nearly all genuine working relics from the Golden Age of Hollywood. As a teenager I was thrilled that any of them were still around making movies. Cocoon was released in theaters the same month I graduated from high school. It not only represents the end of an era for a generation of Hollywood stars but on a personal level it represents the end of my childhood.

1985 was a big year for Floridian senior citizens in entertainment. The Golden Girls began its seven season run that September (both Don Ameche and Jack Gilford would make guest appearances). This was really the beginning of the modern concept of the vibrant, still active, elderly person we see today. Humans are living longer and staying healthier much later in life than ever before. In a small way Cocoon played a role in changing societies' dismissive attitude towards its most senior members.

Cocoon is a difficult film to classify. It's a science-fiction dramedy about old folks that unfolds like a mystery. The cast is excellent. Ameche, Brimley and Cronyn all attack their roles with gusto. Ameche in particular seems to relish his return to the spotlight. I can only agree with Eric that Jack Gilford is heartbreaking in his big emotional scene at the pool's edge. And the women all give outstanding support. This movie has talent to spare. Part of Cocoon's charm lies in its originality and in not knowing what's going to happen next. It remains my favorite Ron Howard movie.