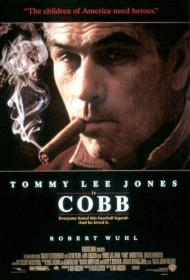 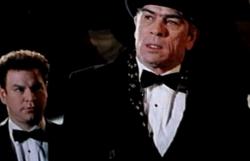 As this movie makes clear many times, especially through declarations by the man himself, Ty Cobb is considered one of the greatest baseball players of all time. I heavily disagree however with the opinion stated that he invented the modern game. His career peaked at the height of the deadball era, when small ball was king. Clearly it was Babe Ruth who ushered in the modern era and its fascination with power and home runs. You can't deny Cobb's talent though and he still, more than 80 years since his retirement and 50 years since his death, holds many baseball records including the highest lifetime batting average of .366. Unfortunately, you also can't deny, as this movie so aptly displays, that he was a truly rotten human being and the biggest son of a bitch who ever played the game.

Instead of telling a straight chronological biography, Cobb starts in 1961, the year of Cobb's death. Riddled with cancer, among other medical problems, and sensing the end is near, Cobb hires Al Stump to write his biography, or at least a sanitized version of it. Stump agrees, traveling with Cobb to a Hall of Fame dinner in Cooperstown and then down to Cobb's hometown in Georgia. Along the way, Stump learns that all of the legends about Cobb's temper and vile behavior are true.

Although we are given some of Cobb's past via flashbacks and the stories that he tells, we are shown surprisingly little baseball. There's really only one scene of it in the entire film where we see Cobb faceoff with a pitcher (played by real life pitcher Roger Clemens (another player with a reputation for bad behavior)) and then steal a couple of bases with his famous high-spiking slide. I found this lack of baseball to be a rather surprising choice.

Instead of baseball we are shown how extremely racist, misogynistic, anti-semitic and violent Cobb was right up until his death. It suggests a possible reason for this with the death of his father, but that isn't enough to truly explain and certainly not justify his behavior. He's a colorful and interesting character and even though he's shown to be a lonely and bitter old man at times, he is never sympathetic.

Several of the stories shown here about Cobb have been questioned by baseball scholars. There's no evidence that he pistol whipped a man to death for instance. Other of his actions though are well documented. He was widely reviled by other players of his era and one sportswriter of his time wrote that Cobb made the game into "something like a war."

One of Cobb's uglier moments includes an incident where he charged into the stands and beat a heckler bloody, not caring that the man was handicapped and without hands. His reason for the fight?  The man had called him a, "half-nigger". You can, as some baseball historians have done, excuse Cobb's racism as a product of the time and his upbringing in Georgia, but does that really excuse it when he never changed his attitude no matter how far he got from that time or place?

While this movie does a great job of showing what type of man Cobb was and Tommy Lee Jones delivers a great performance as the baseball legend, overall the movie never lives up to either the character or the actor. It wants to make a statement about heroes and reality, but it never really gets there. Stump writes two different biographies during the movie. One is the whitewashed version that Cobb wants and the other is the true version as Stump sees it. He questions which version he will publish, but when he finally decides at the end, it doesn't really ring true. I didn't buy his reasons.

There have been so many bad behaviored celebrities and the public puts up with them because they're fascinating to watch. We are entertained by their antics. Sometimes that bad behavior is backed up by actual genius.  Other times, it's just backed up by idiocy like Charlie Sheen or Lindsey Lohan. In the case of Cobb, you certainly can't deny his genius, even if it never does excuse his behavior.

Cobb, the movie, isn't great, but Cobb, the man, as acted by Jones, is fascinating in the same way as a road accident. You might not like what you're seeing, but you can't look away. 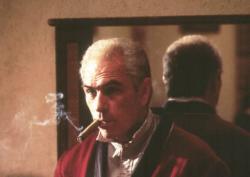 The ending is a complete cop-out. As the movie shows, Al Stump wrote two books on Ty Cobb. The official flattering portrait that was published after Cobb's death in 1961 and then a second book more than 30 years later, which this movie is based on. Stump spends the entire movie showing Cobb in the most unflattering light and then suddenly decides to publish the sanitized version? It really makes no sense.

Ty Cobb was certainly a son of a bitch who was disliked in life, but the veracity of Stump's book upon which this film is based has since been called into question. Stump has been accused of extensive forgeries of Cobb-related documents and even of falsely claiming to own the shotgun Cobb's mother used to shoot his father. Cobb's father was in fact killed with a pistol. The most likely scenario is that the real Ty Cobb was somewhere in between the two vastly different versions Stump wrote about.

Some of his violent actions are well documented, such as the incident with the heckler Scott mentioned, but his views on race did change over time; although you wouldn't know it by watching this movie. In 1952 he came out publicly in support of integrated baseball and was quoted as saying, “Let me say also that no white man has the right to be less of a gentleman than a colored man, in my book that goes not only for baseball but in all walks of life.”

The only truly sympathetic scene in the movie is when it is revealed that Cobb has been financially supporting former player Mickey Cochrane for years, without publicly acknowledging this fact so as not to embarrass the man. However, once again the historical accuracy of the movie is called into question, since the real Mickey Cochrane managed the Detroit Tigers to a playoff position and served in WWII.

Watching this movie is like being forced to spend time with a really annoying old uncle. Tommy Lee Jones hams it up the entire time. The scene in the car during the blizzard seems to go on and on and on. It includes not one but two car crashes. I thought it would never end.

The script does manage to include some humor. The funniest line comes after Cobb has been insulting Babe Ruth while recording his memoirs and Stump says to him, “Come on Ty, aren't you going to give Ruth credit for anything?” (brief pause) “He could run okay for a fat man.”

Unlike my brothers I do not follow baseball. Sure I had heard of Ty Cobb but I really had no idea just how large a shadow he cast over the sport. His career remains legendary more than a century after he played his first game for the Tigers. Scott mentioned his career batting average record. Here are a few more records he still holds as of this writing. He batted .300 or higher in 23 consecutive seasons (missing only his rookie year). An incredible 5 times in his career he reached first base and then stole second, third and home (he stole home a record 54 times). Surely the man, for all his flaws and demons, was an athletic genius.

Cobb, the movie, is bullshit. It purports to create an honest portrait of Tyrus Raymond Cobb but in reality it is out to vilify him. The ending is Al Stump having his cake and eating it too. 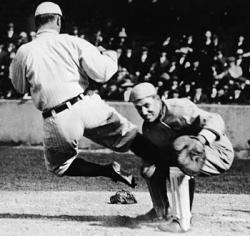 The real Ty Cobb showing what an aggressive player he was.

Watching this depiction of Ty Cobb reminded me of those tall tales I read as a child. As my brothers pointed out, Cobb's stats speak for themselves, but his personality has become larger than life, and I suspect some what exaggerated. Even Joe DiMaggio was quoted as saying about Cobb, "Every time I hear of this guy again, I wonder how he was possible."

Ty Cobb may very well have been a socially inept jerk, but as portrayed here, he seemed to be one more out of notoriety than actual belief. When Cobb and Stump go to the night club and Cobb does a bigoted rant on the stage, he seems to be doing it more to put on a show than to actually express some pent up anger. He is like a comedian who feels he has to be funny when in public. Cobb knew very well what people thought of him and relished the chance to perpetuate his own image.

Scott wrote of Cobb's father's death. Patrick mentioned the part about how Cobb financially supported Mickey Cochrane. This movie tries to peel some of Cobb's hard shell away to show the human behind the legend. When Stump first arrives at Cobb's home, we see a black servant quitting in a huff. If Cobb was truly a racist, would he have even hired a black man to work in his home?

Cobb is portrayed here as an old man still caught up in a competition that no one else wants to compete. He has to race Stump on the icy road. He pays the girl at the night club to tell everyone that he was the greatest lay she ever had. Near the end, after finding his notes, Cobb yells at Stump, "You beat the great Ty Cobb. I respect that."

I have no idea what Ty Cobb was really like, or how accurate this film is, but there is a general concession that he was a very annoying person to be around.  Perhaps that was due to how he was raised and he was everything everyone ever said about him? Perhaps he saw how notorious it made him and he put on a show for the fans and writers. When he became to old to play, he still had his personality and an image he could cultivate. Ty Cobb may have been a bull shitting bastard but, as portrayed here, he was fully aware of how the world perceived him, and he loved it!