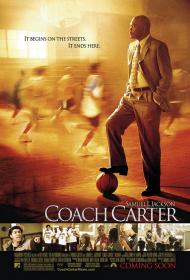 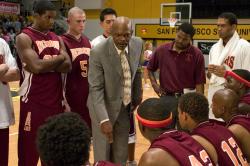 Coach Carter is a movie with a message and that message is to take responsibility for yourself and your actions. It's a good message and it's delivered by a solid cast, led by the always-dependable Samuel L. Jackson. If it had been delivered with just a bit more subtlety and with a little less melodrama, this could have been a great movie, instead of what it is, which is merely a good one.

Jackson stars in the titular role as a sporting goods store owner who accepts a job as high school basketball coach at the school where he still holds several basketball records. The team at the school is filled with raw talent, but no discipline. Carter begins his reign as coach by requiring all of the boys on the team to sign a contract stating that they will maintain a 2.3 GPA, that they will sit in the front row of every class, and that they must wear a coat and tie to school on game days. In return, he promises to guide them to a winning season. After much grumbling, the boys fall in line and begin to accept the Coach, especially after his training methods soon put them on an undefeated winning streak.

When Carter learns that not all members of the team have been keeping their grades up and meeting the requirements stated in the contract, he locks the gym and moves practices to the library, canceling all future games until the entire team's grades are brought up to at least 2.3. Parents and teachers are outraged over the Coach's actions because as they very short-sightedly state, "Basketball is all these boys have." Carter, unmoved by their pleading, counters with the statistic that only 50% of students from his school actually graduate and that of those 50%, only 6% ever make it to college. A male student at his school has a better chance of landing in prison than making it to college. He's there to show them that basketball is a means not an end.

The problem with this movie is the way in which its message is delivered. There is just too much sermonizing in its delivery. One of the only reasons the movie gets away with as much of it as it does, is that Samuel L. Jackson can deliver lines like these and make them sound sincere. Keen Ivory Wayans once spoofed movies about the 'hood' with Don't Be a Menace to South Central While Drinking Your Juice in the Hood. As he did in that movie every time someone said something serious, I kept expecting him to appear here to point out every time someone was trying to deliver a 'message'.

Apart from the sermonizing, the movie also runs long. At two hours and fifteen minutes, there remains plenty of scenes that could have been trimmed. The ultimate message of this movie isn't about basketball and so some of the time on the court could have been reduced as well as a subplot involving one of the player's relationship with his pregnant girlfriend.

Despite the bluntness of its weapons, Coach Carter does manage to inspire, aided by the fact that it's based on a true story. 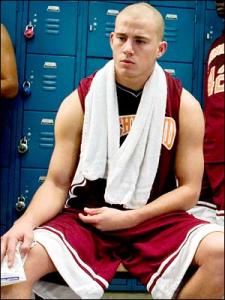 Channing Tatum looks as bored as I was watching this.

Although this is based on a true story, the interesting true story for me would have been about Ken Carter and not the students. All of the students appear to have come from broken homes. Without a father figure to teach them respect, they are all undisciplined, rude children unfit for civil society. We know why they act the way they do. No one in their life has ever held them accountable for anything. These kind of kids are a dime a dozen. Their story is sad but not unique.

Ken Carter, on the other hand is rare. Here is a man who takes a job for no other reason than to brag about his past highschool glory and help his old team out. He is very educated. On the DVD their is an interview with the real Ken Carter. Jackson does not do him justice. The real Carter speaks intelligently, with out any slang. Jackson plays Carter as more rough than brilliant. Carter is a single father who came from a large southern family. I want to know more about how he was raised and became the man he did, than I do the athletes.

As Scott mentioned, too much time is given to side plots. One involves a romance between a basketball player with college potential, and his pregnant girlfriend. Any mildly intelligent adult knows theirs only two ways that plot will end. Another pointless story is about a belligerent player who deals drugs with his brother. Again, we know how that will play out.

When the movie stays on Carter dealing with a system that fails children on the family front as well as in the school, you have an arresting drama that speaks volume about the state of some segments of our society. Whenever it focuses on the teens, the movie turns into an after school special.