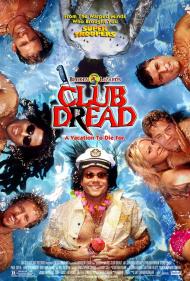 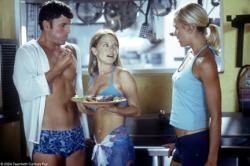 Some of the cast from Club Dread.

The wacky minds that brought us Super Troopers return to the big screen with Club Dread. While I wasn't completely enthralled by their first outing, this one is filled with enough zany humor, most of which works, to turn me into a fan. Oh sure, it's tasteless and vulgar at times, but mainly it's just plain funny. If all of their movies improve over the previous one, as this one does, they should be hitting pure comedy gold in one or two more movies.

This time around the Broken Lizard troop, along with a bevy of scantily clad beauties and a scraggly Bill Paxton (as a washed-up rock singer along the lines of Jimmy Buffet), play the employees of an island resort. Shortly after a boatload of tourists arrive on the island, the movie evolves into a spoof of a combination of late 70s/early 80s horror movies and a Scooby Doo adventure, with a machete wielding maniac roaming the island killing off the resort employees one at a time. Although this does provide some graphic and bloody moments, all of the violence is played strictly for laughs and with Broken Lizard's trademark deadpan approach to comedy.

While the killer stalking his victims is the motivation to get the action started, there really isn't much of a plot here, which is the movie's weakness. It feels very much like a comedy sketch movie with each scene tied to the others by the somewhat loose storyline. So, while I did laugh quite a lot during the movie, it's just not deep enough for you to ever really care about any of the characters as real people.

However, there is enough comedy that works to make up for the shallowness of the movie, and some of it is spot on satire of your typical horror movie. The movie opens with two girls and guy about to have sex in the jungle on the island. When they think they hear a noise, they move somewhere quieter and more romantic; a cemetery. And with perfect horror movie logic, they then decide that the best place to carry on is inside the ancient mausoleum. Later, when another women is being chased by the killer, she leaps into one of the island's little cars, fumbles with the keys as the tension mounts, and races away, only to discover that the little vehicle's top speed is about two miles an hour. The killer, even with the slow methodical gait of all movie mass murderers, walks casually alongside the car and slices her with the machete. It's the little moments like those that work best in this movie.

Like Super Troopers, Club Dread is a good movie to just relax and have a good laugh with. It's very silly and very funny. How can that be bad? 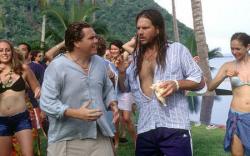 Like Scott, I enjoyed this movie for its absolute silliness. No sophomore jinx here. The secret to Broken Lizard's comedy is that they have the maturity level and sense of humor of your typical teenage male but being thirty-something adults they also have the ability to step back and add an adults world view and sense of history. The scene where they are listening to one of Coconut Pete's old songs and analyzing his acid-trip lyrics in order to figure out who the killer is is priceless.

As Scott said Club Dread spoofs teen slasher movies of a generation ago. It does so in much the same way that the Scary Movie franchise spoofs more recent teen horror movies. All the references to pot smoking and the drug addled seventies, the way the characters dress and talk, and the hedonistic attitude of everyone on the island, should add a bit of nostalgic resonance for anyone born before 1970. I disagree with Scott's comments about the lack of plot though. For a movie spoof it has a decent plot, especially in comparison to any of the Scary Movie movies.

While all of Broken Lizard are talented comics a couple members of the troupe are emerging as the funniest. Jay Chandrasekhar, (he also directed this movie and Super Troopers) plays a dreadlocked British tennis instructor with hilarious results and Kevin Heffernan as Lars is the closest thing to a 'Curly' the group has. 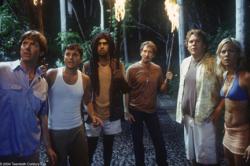 Club Dread works as a horror movie as well as it does a comedy. The humor is dark, too dark. I can't laugh at someone getting sliced opened or stabbed by a machette. Blood and humor are a strange mix that only works in the most absurd movies. Club Dread is not as absurd as it should be.

With all the gore, four letter words, drug use and tit shots, this movie earns its "R" rating in spades. I would sacrifice the rating for better jokes. As Juan, the goat rapist, is about to die, he asks his girlfriend for a kiss. Not for him. He wants to see her kiss this other girl before he dies.

Patrick wrote that this was a satire of old 80's horror movies. I think that is my problem with Broken Lizard. In both of their movies they have tons of drug jokes. They are like an early 80's Cheech and Chong movie. Time to wake up and smell the decade.

This is, however, the best work Bill Paxton has ever done. He belongs in comedies. His burnout old singer is the funniest thing in this movie. The lyrics to his songs and Paxton in drunken repose are the best moments of the film.