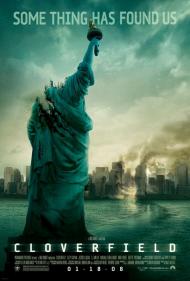 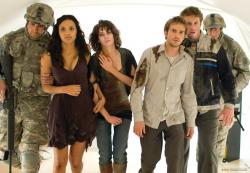 The cast of Cloverfield.

Cloverfield is one of those movies that is very entertaining to watch, but let your mind think too much about it and you'll quickly see some pretty big holes in the plot. The good news is that the movie is short enough (less than 1 and a half hours) and moves so quickly, that while you're watching you won't really have time to think about it, but on the ride home you might find yourself asking a few questions that the movie doesn't provide answers for.

Summing up the plot is simple enough. It's a remake (not in name) of Godzilla. A very large monster attacks Manhattan. The entire movie is shown from the point-of-view of a hand-held video camera. A group of friends are gathered in lower Manhattan for a farewell party to one of their own and their video taping good-byes to him from the guests. After the monster attacks, a small group from the party breaks away from the crowd to travel uptown to rescue a friend and they bring the camera with them to document the night.

The group of five are given just enough characterization so that you can understand their motivation, but they're not so fully developed that when, inevitably, some of them die you're not that heartbroken over them. But characterization obviously isn't the point here. It's all about the action and this movie packs a lot of it into its short running-time. There's the first attack of the monster with buildings collapsing, there's the run through the subway tunnels, there's the rescue operation in the Time-Warner Building (where one of the towers has been damaged and is now leaning precariously against the other), among others. All of them are excitingly filmed, although be warned if jerky camera movements bother you, because this movie is filled with them.

One of the best choices the filmmakers made was the decision to pull a Jaws with the monster. Like the shark, it's only seen in glimpses and usually partially obscured right up until the end. It adds to the suspense and sense of realism.

As to the unanswered questions, here's just a few I can think of off the top of my head. What is the creature? Where did it come from? Why is it attacking New York City? Why does it run from the tip of Manhattan up to Central Park and back destroying buildings as it goes, and then back downtown and then uptown and then all around the town? How is it able to withstand constant bombardment and gunfire without any discernible wounding? Why, even if it doesn't get wounded, does it remain on the island when it's being (at the very least) seriously harassed by the military? Why does the helicopter fly so close to the monster?

But you know what? Forget all those question when you're watching. Just enjoy it. For a movie to be this enjoyable in January (Hollywood's traditional dumping of trash into theaters month), is enough. It doesn't have to make sense too. 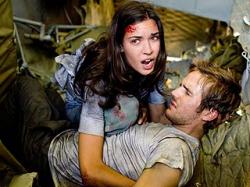 Cloverfield is a lot of fun to watch. Having not lived in New York, I was not bothered by the monsters pointless wandering of the city. I never realized any of the logistics of it. Besides, maybe the military attacking it caused it to continuously change directions.

Cloverfield is a spectacle. There is plenty to watch and enjoy. The hand held camera gimmick makes things seem strangely more real and tense. The best example is when they are pinned down between the monster and the Army firing missiles at it.

While none of the characters are worth caring about I would have liked to have seen more of them live. I hate rooting for someone or a group of people just to see them die. Our emotional investment is worth something, and movie makers should understand that. Spoiler alert, but this film ends on a horrible note. After you watch this film, think to yourself, "What was the point?" People die and suffer just to save someone and then the movie ends like this!

A movie, at least a decent one, elicits an emotional reaction from an audience. In this case it is sympathy for the struggles of these people caught up in a hellish situation. We concern ourselves and hope that they make it. When they don't it means that the characters wasted their time because all the struggling they did just postponed their death and the audience wasted their empathy.

Cloverfield is worth watching for the gimmick and special effects but the final payoff is hollow. As Scott noted, it never answers the obvious questions. It also wastes the time we spent on our concern.

Yeah there is plenty of eye-candy action on display but Cloverfield is ultimately a disappointment. The filmmakers hint that the creature labeled Cloverfield is a military experiment gone horribly wrong but give no direct answers. The ambiguous ending is frustrating and annoying. As a moviegoer I paid money to know how the story ends. It is lazy writing to just stop the movie and leave it to the audience to decide what happened next.

That said it does manage to entertain for most of its brief running time. The filmmakers deserve credit for taking an outlandish concept and executing it well. It maintains an impressive level of realism throughout and features some truly frighteningly tense moments. The scene in the subway tunnel was my favorite with the close-up of the monster in Central Park being a close second.

Although the cast of unknown actors tries hard the script doesn’t really allow for any personality development. But then since (as written above) they all die anyway it doesn’t matter at all and allows for the movie to slam along at full speed.

Cloverfield is almost a modern horror classic. It needed better written characters and a more uplifting conclusion that explained the presence of the monster. As is it is just a movie curiosity that is already on the fast track to obscurity. 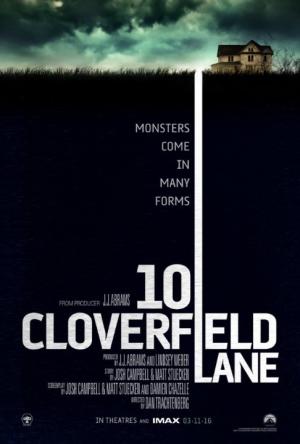